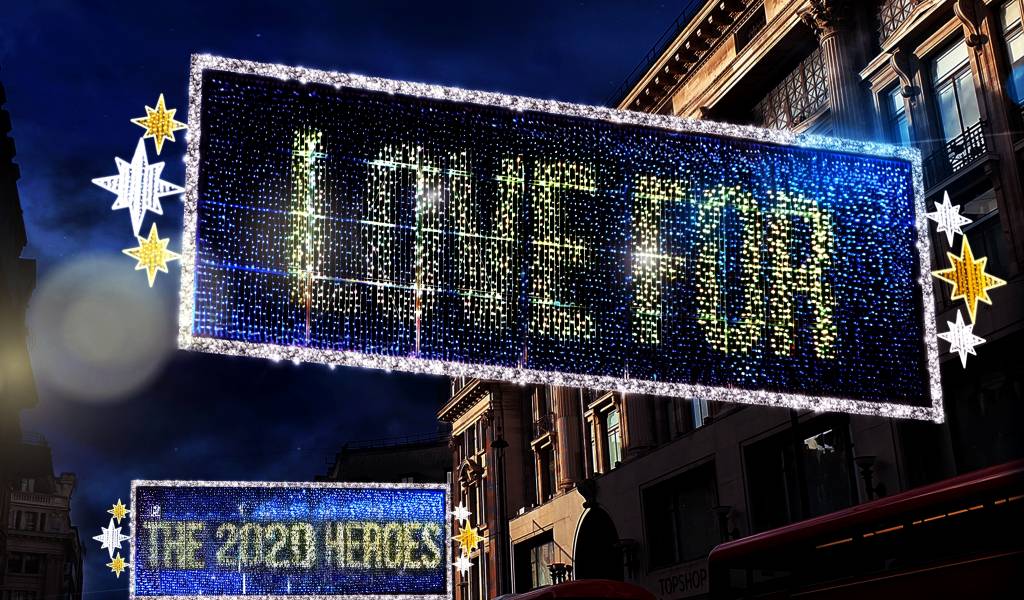 Pic: Oxford Street Christmas 2020
Sharing
We are yet to confirm the dates and details of this event.

This year’s famous illuminations along Oxford Street will be dedicated to the heroes of 2020, with a special new light’s display ‘To London with Love’.

Members of the public can nominate their 2020 Hero for a chance to see their name in the iconic world-famous lighting display—and win a £500 shopping spree. Each week will see a new name adorn Oxford Circus for a full seven days. The first hero’s name in lights has been announced as an NHS Volunteer Responder.

The 27 “light curtain” LED decorations, which were revealed last year, will also display a poem commissioned in partnership with Selfridges to pay tribute to the people of London and how they’ve come together during the pandemic.

The light curtains are made with around 220,000 twinkling LED lights. They’re not just impressive to look at either—they use 90% less energy than the conventional lights used in previous years.

One big difference from previous years is that there will be no big switch-on event and the lights will be turned on about three weeks earlier than usual. The earlier start is part of the British Retail Consortium’s push to get people to shop early for Christmas so that there won’t be huge crowds close to Christmas.

To prevent the spread of COVID-19, many events have been cancelled. Always check official sites before heading to an event.