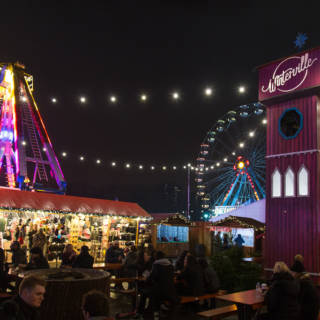 Pitching itself as London’s alternative Christmas Experience, Winterville is back this year and bigger than ever. Filling Clapham Common with its ice rink as well as markets, Plonk Golf, street food and performances. Street Feast will be in charge of food, with a mouth watering array of stalls offering international food and treats to sate your hunger.

The Backyard Cinema is hidden in the Christmas Labyrinth along with singing statues a secret tequila bar and a whole roster of festive films including Home Alone, Love Actually, Elf and Even The Greatest Showman. Visit the Spiegeltent for a mad-hatter mix of entertainment including live comedy, a kid-friendly rave, disco yoga, musical bingo and Chivaree Circus. Speaking of little ones, they can enjoy the Family Show and child-friendly fairground rides like the carousel and ghost trains. There are markets to explore and bars too!

Free entry applies to the following:
– Anyone on Tuesdays
– Anyone with a pre-paid attraction ticket
– Everyone under the age of 16
– All SW4 residents during off-peak times

Tickets are required for almost all attractions including Ice Skating, Kid’s Rave, Family Show, Roller Disco, Comedy and the Cinema so book in advance to avoid disappointment as it is a popular event. Ice Skating Tickets are available for £10 for adults and £8 for children.