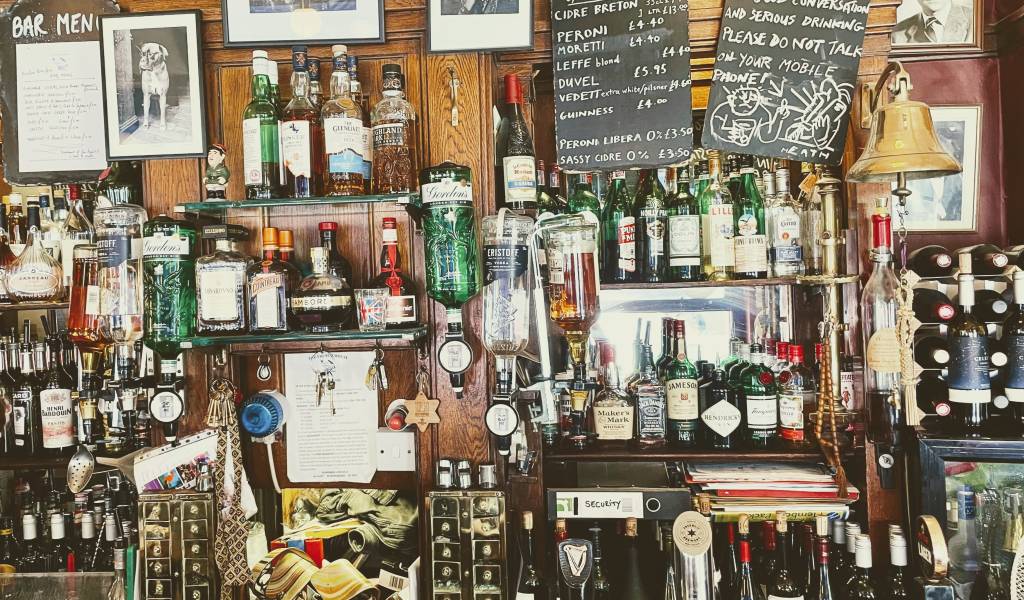 Proper pubs are a timeless slice of London’s history. Whether you’re a visitor to London looking to enjoy its traditions or a thirsty local looking for a pie and a pint, we’ve rounded up some of the best old pubs in Soho.

Probably Soho’s most iconic pub, the French House is a charming old-school hideaway in this buzzy, media-centric area of London. Known as a meeting place for members of the Free French movement during the Second World War, the tiny bar plays host to actors, writers, artists and all manner of creatives. It allows no music, no television and no mobile phone calls, which makes it an absolute haven for witty conversationalists. You’re more likely to see someone holding forth over a Ricard or a glass of wine at the bar than a beer – and you won’t see anyone with a pint unless it’s April 1st, as for the rest of the year the French House famously only serves halves.

It’s far from obvious from the unassuming staircase, but upstairs is one of London’s best restaurants, headed up by gifted chef Neil Borthwick. The French House Dining Room, or simply ‘Upstairs at the French’, is small but truly fabulous – booking is strongly advised.

This historic Grade II Listed pub dates back to 1739 and has been recently restored to include three distinct areas. Chef Luke Selby’s Michelin-starred restaurant Evelyn’s Table is downstairs in the former beer cellar, the ground floor remains a cosy London pub with beautiful antique Georgian windows and a pewter bar, while the first floor hosts upmarket wine bar The Mulwray. As a free house they have a wide and ever-changing selection of craft beers and indie cask ales, lagers and ciders.

One of the best old pubs in Soho, the Dog & Duck originally dates from 1734 when it was built on the site of the Duke of Monmouth’s home. It moved to the current site in 1897 and has a beautiful cosy Victorian interior with glazed tiles, mahogany panelling and vintage mirrors – not forgetting the dog and duck mosaic set into the floor at the entrance.

George Orwell celebrated his book Animal Farm‘s selection for the American Book of the Month Club with a glass of absinthe in this pub, joining a list of illustrious customers including John Constable and Dante Gabriel Rossetti – oh, and did I mention Madonna?

Known as the Grande Dame of Old Compton Street and emerging as one of Soho’s leading gay pubs in the mid-eighties, Comptons still feels like a proper pub rather than a club, with everything from wood panelling and a Casque Marque for real ale to fizz and cocktails. So much so that a doorman politely enlightens bewildered middle-aged straight couples looking for a pre-theatre G&T, directing them gently to a more suitable venue before they kill the vibe.

This endearingly shabby Grade II listed gem of a pub goes back to 1731 (with the current building dating from the 1850s) and has one of the most characterful backstories of all the pubs in Soho. Once frequented by famously dissolute journalist Jeffrey Bernard and run by London’s rudest landlord, Norman Balon (hence the name on the sign), it has been immortalised in Private Eye and the Keith Waterhouse play Jeffrey Bernard is Unwell. Balon delighted in excanging scathing insults with customers, particularly his journalist regulars. His memoir was entitled ‘You’re Banned, You Bastards’.

The Marquis of Granby

Named after a popular eighteenth-century military figure, this mid-Victorian pub apparently had a rather diverse clientele in the 1930s, with glitterati TS Eliot and Dylan Thomas rubbing shoulders with small-time gangsters.

The unusual name originates from the pub’s links to the Swiss watch-making community in Soho in the late 1800s. At the time there were twelve counties, or cantons, in Switzerland; Soho’s sizeable Swiss community became its thirteenth and was added to the original pub name, The Sun. Central to Soho’s film and TV scene in the 80s, the lengthy celebrity regulars list incudes Ridley Scott, Jude Law, Ewan McGregor, Sean Pertwee, Russell Crowe, Gemma Arterton and the Chemical Brothers.

London foodies will know this pub for its dining room. A regular home to some of the most cutting-edge culinary talent in London, this is your chance to eat the Next Big Dish before anyone else. Previous residencies include Darjeeling Express and Netflix’s Chef’s Table star Asma Khan and Sambal Shiok’s Mandy Yin, so it has serious form.

A classic wood-panelled Victorian pub with etched windows, an open fire and a ceiling decorated with beer tap cards reflecting its focus on craft beer and real ale. One of the best old pubs in Soho and very popular with locals.

This pub is named after the local doctor who, in the 1850s, traced a cholera epidemic that killed over 600 people in the area to contaminated water from the Broad Street Pump. He had the pump handle removed to prevent it being used, proving his theory of water-borne infection and saving countless lives. A replica of the pump has been installed in its original location next to the pub in his honour.

If you’re new to London and fancy having a local show you around, you might like to have a local show you around and join a soho pub tour. This Soho experience walking tour costs just £22.00 and takes you for a pint at 5 pubs in the soho area. Alternatively you can see a bit more than just Soho if you join this pub tour of the West End, it includes 6 beers around the Soho and Covent Garden area.