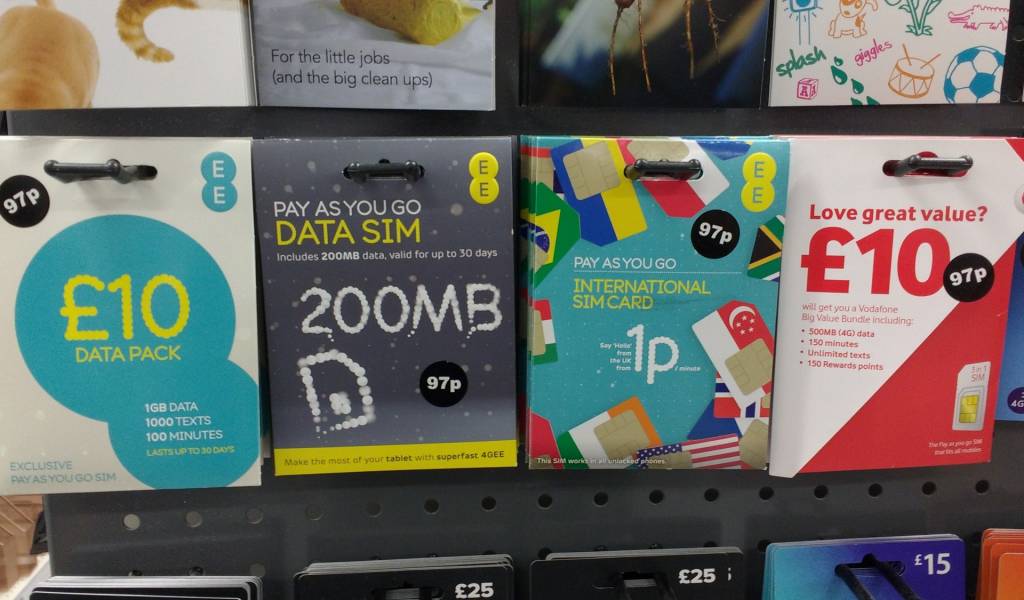 Prepaid mobile plans in the UK are an easy way to keep your mobile data costs under control. You won’t get any nasty surprises and you’re not tied into a long-term contract that stops you switching to a better deal when it comes along.

What’s the difference between prepaid, pay-as-you-go, and regular contracts?

Prepaid plans sit in the middle between pay-as-you-go (PAYG) and regular monthly contracts (sometimes just called post-paid). PAYG and prepaid are similar in that in both cases, you pay for the data before you use it.

With PAYG, you need to buy top-ups once you’ve used up your data or the data has expired. With prepaid, you can cancel at any time, switch to a different plan, or continue with your existing plan but you need a payment method such as credit card or debit card.

Regular monthly contracts are post-paid and have cancellation fees if you want to get out early. They also require a credit check and for you to jump through a few hoops when you sign up. For more info, see our article on SIM-only vs. contract phones.

There’s plenty of UK mobile networks providers and a healthily competitive market, which means you can get pretty good prepaid deals.

What follows is a non-exhaustive list of prepaid UK SIM card options. For more details, check each carrier’s site.

Our favourites: VOXI, SMARTY and giffgaff are strong contenders for the top spot among prepaid UK SIMs, and often have special offers with extra data. iD Mobile also have weekly deals that are worth a look.

VOXI offers a contract-free, rolling monthly deal with “endless social media”, allowing unlimited use of social apps without touching your data. They have a similar “unlimited video” feature.

Note: 1. Some packages may allow for data rollover. 2. Giffgaff offers two types of prepaid SIMs—really flexi month-to-month deals, which come with 4G-only, less data and higher prices, and slightly less-flexi rolling monthly plans that are 5G-ready and come with more data and lower prices, but require a saved debit or credit card. T&Cs apply to all prepaid UK SIM offers.

Will a UK SIM work in my phone?

Unless your mobile phone is positively ancient, the correct type of SIM card will be what’s called a “nano SIM”. Even if your phone is a relic from the past, you’ll be fine as the big carriers all sell “trio SIMs”, which means no matter which one you buy, it will fit in your phone.

Generally Australian, European and US phones work with UK SIMS as most modern handsets work on multiple bands, but if you’re unsure, check Will my phone work? to see which providers will work with your handset.

And if you’re set on getting a 5G SIM for your shiny new 5G compatible handset, or just 5G curious, take a look at our guide to what 5G is and where to get a SIM.

Do UK SIM cards still work in the EU and abroad?

Post-Brexit, UK mobile providers no longer have to provide free roaming in the EU. However, most providers still do — and you can usually carry on using your phone allowance in the EU the same as if you were still in the UK. All our favourites — Voxi, Smarty and giffgaff — do this, as well as most major carriers. In fact, UK mobile providers compete on how many additional destinations outside the EU where they also offer free roaming; Vodafone claims a total of 83 countries, for example.

Where are the major carriers like O2, EE and Vodafone?

Historically, the big names haven’t offered many 30-day prepaid plans, though this is starting to change. As mentioned above, our list is by no means exhaustive; we’ve just put together a selection of what we reckon are some of the best—and most straightforward—UK SIM deals. We recommend looking at more providers before making any decisions.

It’s worth noting that some of the virtual network providers above are subsidiaries of the big operators. For example, VOXI is a subsidiary of Vodafone, and Lyca Mobile and Plusnet operate on the EE network. Meanwhile, SMARTY and iD Mobile run on Three, and Giffgaff uses the O2 network.

All UK SIMs will be at least 4G/LTE and many are also 5G-ready (meaning you need a 5G phone), so the upload/download speeds are generally very good. However, the main question is network coverage, as you need a decent signal to actually enjoy the full 4G/5G speeds. Fortunately, most towns and cities in the UK have good 4G coverage, plus many major cities now have 5G coverage too.

Mobile coverage in the UK countryside is where the network providers can potentially make a difference. Overall, EE is probably the best network, followed by O2 and Vodafone, with Three coming in last. All the providers have a network coverage map (e.g. Three, Vodafone, O2, and EE) so if you’re in (or going to be in) a remote rural location, you can check out signal strength before you buy a SIM—see the section above describing which SIM provider is on which network.

Unlocking mobile phones in the UK

From December 2021, mobile carriers in the UK have been banned from selling locked cell phones. While they’ve had to unlock phones on request for many years now, they were still allowed to sell them locked. Having access to an unlocked phone from the get-go can be a money-saver, as it makes it easier to switch providers.

Information on SIMs for travellers to the UK

Travelling without constant data these days is almost unthinkable. Getting from the station to your accommodation? You’re probably going to want to follow that little blue dot on the screen all the way to your bed for the night. Luckily, getting a good-value prepaid/pay-as-you-go UK SIM card is easy.

The good news about London is that pretty much everywhere you go there’ll be some kind of open wifi network, starting with the airport. Don’t be tempted to get a PAYG UK SIM at the airport, because there’s a good chance it won’t be the best deal available. Rather order online, or wait a bit.

Do I even need a UK SIM?

Before Brexit, EU residents could typically roam for free in the UK. Nowadays, it depends on your particular mobile provider, and the rules they’ve set (these can change, too). So, your best bet is to ask on sign-up.

Increasingly, non-EU mobile providers are offering free or discounted roaming. For example, if you’re in the US on T-Mobile, free international roaming is included with “ONE”, “Magenta”, “Simple Choice”, “New Classic” or “Select Choice” plans. Others offer low per-day roaming costs. Sometimes these roaming plans require pre-activation, so check with your mobile company before you travel.

Even if your plan does include international roaming, you might want to check the fine print—or just test performance after you arrive. Some plans are restricted to 2G data speeds (for example T-Mobile is restricted to 128Kb/s!), so getting a UK SIM might still be worth it.

How much data do you need?

As long as you log in to wifi when available, you probably won’t use much more data than you use at home. If you go on a data diet, you might be able to keep yourself to 100Mb/day or less, but personally we like to have a comfortable buffer of data for those situations when you need to know if the last train is leaving from your closest station in the next five minutes.

While we do our best to make sure the information in this post is correct, prices and other details are subject to change. This post was originally published on July 12, 2017. Last updated October 6, 2022.