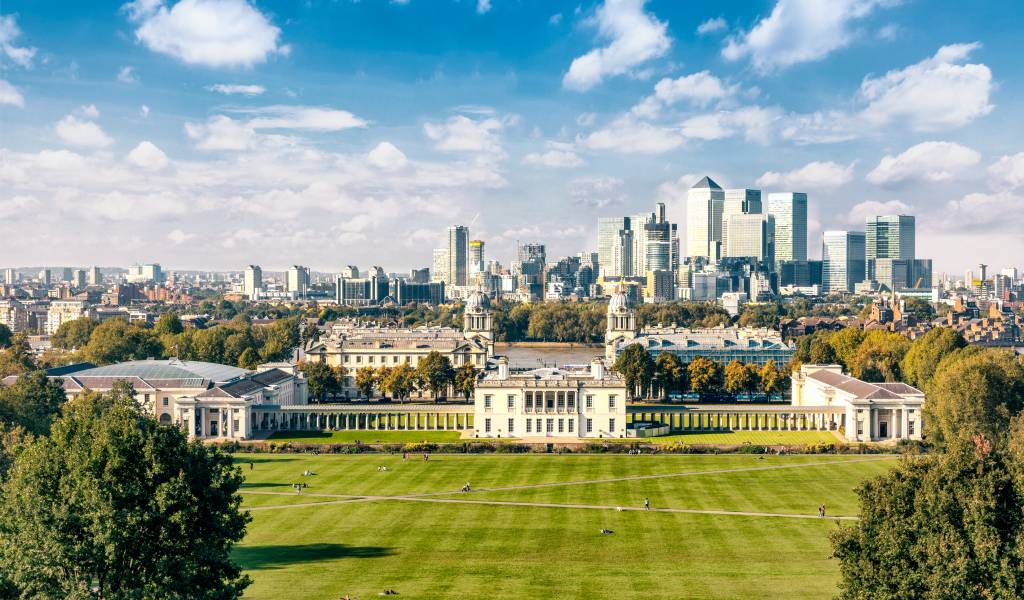 12 Free and Cheap Things to Do in Greenwich

Greenwich is a scenic, historic part of South East London, popular with tourists and Londoners alike. It’s famous for maritime history, being the home of Greenwich Mean Time (GMT), The Cutty Sark, the National Maritime Museum and London’s only planetarium. So if you’re wondering what to do in Greenwich, here’s our top picks:

1. Head to Greenwich Park for leafy strolls and city views

Wander through the park grounds to discover ancient trees, a deer park and several gardens, including a rose garden and a herb garden. The Queen’s Orchard is also open to the public at select times throughout the year, but closed in winter.

The park is so massive it has not one, but three cafés. The Pavillion is a quaint, octagonal café by The Royal Observatory. Pop in for cream teas as an afternoon treat. For a cuppa on the go, hit up The Park View Coffee Cabin. The White House Cafe, which sits on the edge of the park, has a countryhouse feel.

Head up to the top of Greenwich Park, under the statue of James Wolfe (18th-century British Army officer) for one of the best views in London. But pick your time wisely—it can get pretty crammed on weekend afternoons. 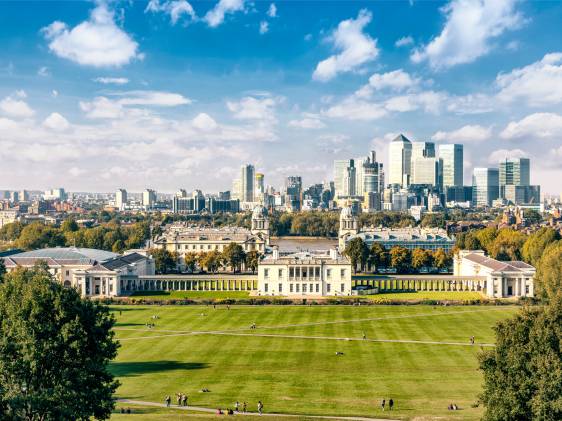 2. Step aboard the Cutty Sark

The Cutty Sark is a famous 150-year-old clipper ship that travelled the high seas for tea, sailing between London and Shanghai eight times.

Visiting the Cutty Sark today, you can take the ship’s wheel, explore above and below deck and meet the crew for a taste of what life was like onboard in ye olde seafaring days. Tickets cost £16.00 for adults and £8.00 for children. 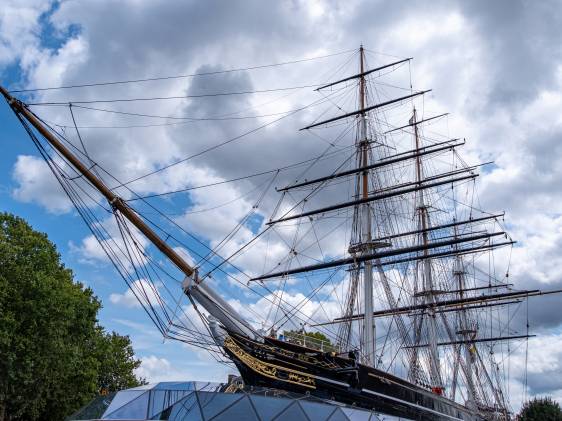 3. Discover stories from the sea at the National Maritime Museum

The National Maritime Museum in Greenwich is the largest museum of its kind in the world. It’s free to visit, though tickets for special exhibitions start from £10.00.

There’s plenty to explore, including over 2 million nautical artefacts within the museum’s grand walls. The collections are so vast, the museum opened four new galleries in late 2019, where you can discover the piratical voyages of the Tudor and Stuart seafarers and the hidden histories of the Pacific Ocean.

Other free highlights on permanent display include artist J.M.W Turner’s painting of The Battle of Trafalgar, 21 October 1895. Don’t miss the impressive Nelson’s Ship in a Bottle by artist Yinka Shonibare MBE, either. It’s unsurprisingly one of London’s most photographed artworks. 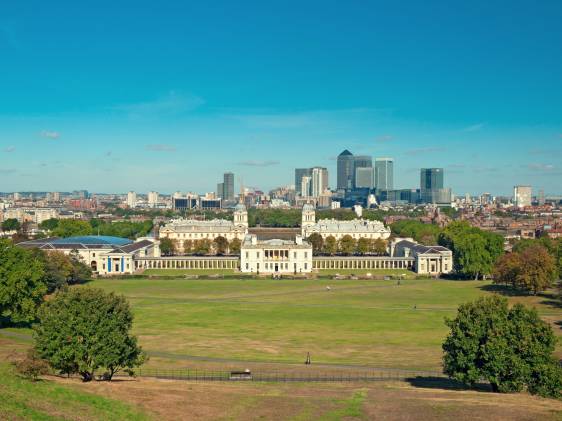 You’d need at least a day to get around all the main Greenwich attractions. But if you’re short on time and don’t want to part with too much cash, you can explore the wonders of the universe for free. Just head to the Astronomy Centre Galleries within the Royal Observatory.

Tickets to the full Royal Observatory cost £16.00 for adults, and £8.00 for children. There are three interactive Weller Astronomy Galleries to see. Here, you can discover how the universe expanded from the Big Bang, guide your own space mission, try astronomy and get expert answers to big (like, really big) questions.

The complex is also home to London’s only planetarium. Catching a show is well worth the price of admission—just be sure to book in advance. If you happen to be there just before 1pm, check out the Greenwich Time Ball on top of Flamsteed House. This red ball is one of the earliest public time signals, dating from 1833 and still in use: at 12:55pm it rises to halfway up the mast, at 12:58 it goes to the top and at exactly 1pm it drops. 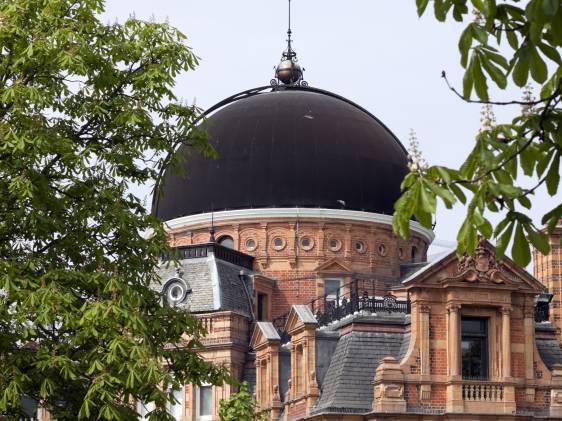 5. Cross the Thames by cable car

Greenwich is home to London’s only cable car, the Emirates Air Line, (AKA ‘the dangleway’). It crosses the Thames between Greenwich Penisula (home of the 02 enormodome) and the Royal Docks. You can take your ‘flight’ on either side of the river.

The journey takes around 5 minutes during the daytime, or you can get the after-dark experience with a night flight, which takes around 13 minutes. Ok, so it’s something of a novelty experience. But if you like aerial views, dangling at 90ft is easily one of the coolest things to do in Greenwich.

If you’re travelling from Greenwich to the Royal Docks, be sure to take a wander over to Trinity Buoy Wharf to see London’s only lighthouse.

6. Grab a bite to eat at Greenwich Market

Greenwich Market is an old covered market that opened in the 1800s, originally selling meat, fish, eggs, butter, and with the odd ‘peddler’ flogging fancier goods like china and glass.

These days, it’s a buzzy mix of art and crafts, vintage clothes, glasses frames, antiques, handmade gifts, homewares, plants and of course, lots and lots of food. The market has 48 food stalls, with savoury and sweet options from all over the world.

Most notably there are Japanese-inspired burgers by Pimp My Ramen, which serves up burgers between crisp, deep-fried Ramen noodles instead of buns. There’s also Ethiopian cuisine from Addi’s Taste, healthy Mediterranean dishes from Ehla Eat, Caribbean sweet treats from Mama Little’s Rum Cake, and vegan baked goods from Vegan Garden. Stalls vary by day and there are more food options over the weekend, when the stalls spill out into Durnford Street. 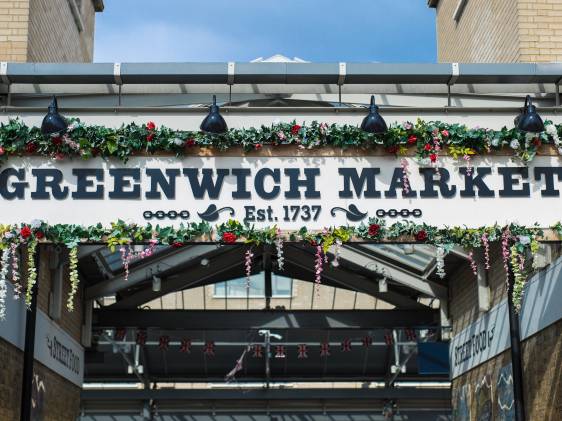 7. Play a round of crazy golf at Greenwich Peninsula

Crazy Golf (or miniature golf) is a pursuit most commonly associated with British seasides, where players putt their way around novelty golf courses. Common dangers include mini windmills, water features, and tricky hills to thwart that hole-in-one.

The Crazy Putt London Adventure Golf course may not have the coastal charm. But it’s inspired by 80s crazy golf courses, so the experience is every bit as fun and kitsch. Players make their way around 18 holes featuring skulls, dinosaurs, pirates, lighthouses and various other bizarre obstacles.

Adult tickets are usually £12.00, but are only a tenner before 5pm on weekdays. Opening hours vary by day of the week. Don’t forget to book in advance.

8. Take the riverside path to see the Thames Barrier

If you take the path along the river towards Woolwich, you’ll see The Thames Barrier, one of the largest movable flood barriers in the world. The barrier is a series of 10 large gates that stretch 520 metres across the river.

They’re quite a sight too, standing over the water like huge, metallic pods. When the gates are raised, they stand as tall as a five-storey building. It’s quite cool just to admire them from the path, but if you want to know more about the role they play in London’s flood defence, a stop-off at the visitor centre will only set you back about four quid. 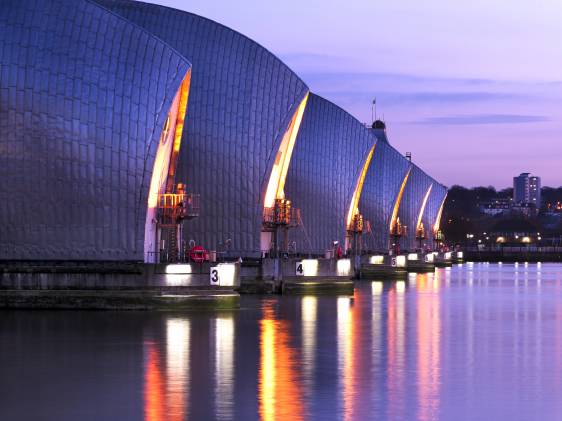 9. See stand-up at Up The Creek

If you’re tired from all the walking and the outdoor stuff in the area, Greenwich is also home to one of London’s most beloved comedy clubs. Up The Creek is well known as an early stomping ground for the likes of Reeves and Mortimer and Jo Brand.

10. Dine out at Davy’s Wine Vaults

Davy’s is both a wine merchant and bar and restaurant, full of barrels of wine and lots of character and charm. As well as plenty of different types of wine, Davy’s also serves a changing menu of mainly classic British food, including bangers and mash, homemade burgers and fish & chips, along with lighter meals like burrata and asparagus salad.

The surroundings might look fancy, but the prices are more in line with gastropubs than fine dining. Expect to pay around £8.50 for a sandwich, £15.00–£19.00 for a main course and £7.00–£9.00 for a glass of wine (175ml). It’s a little splash of decadence, without the headache-inducing bill. It’s conveniently close to Greenwich Train Station too. Within stumbling distance, in fact.

11. Appreciate the art and architecture at the Queen’s House

This architectural masterpiece by Inigo Jones houses an eclectic collection of art from Old Masters to Turner Prize winners, including the famous Armada portrait of Queen Elizabeth I. Don’t miss the beautiful and elegant tulip staircase, an Instagram favourite. Tickets are free but should be booked online in advance.

This lovely landscaped park is good for a stroll but it’s also a nature reserve with an Animal Park and petting zoo. Meet farmyard animals including pigs, sheep, goats, ponies – and a herd of fallow deer. Tours are held every Wednesday at 1.30pm and are free to join.

More ideas: See our article 101 Free Things To Do in London.

While we do our best to ensure it’s correct, information is subject to change. Post first published in September, 2019. Last updated in June, 2022.