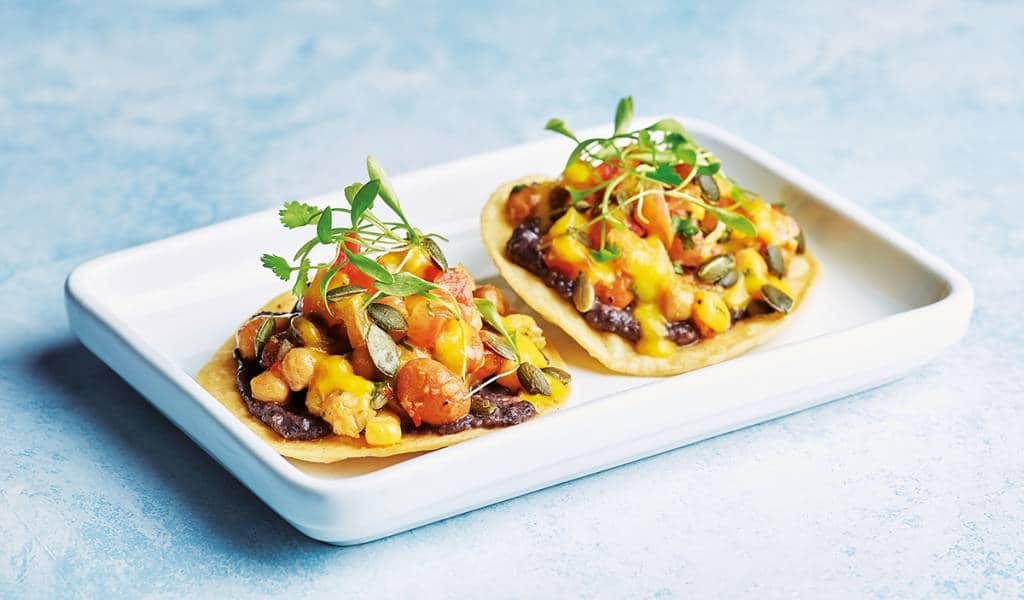 You might be putting the flex into flexitarian for Veganuary 2023 but why would you want to eat somewhere that only bothers to put vegan dishes on the menu once a year? We’ve got a selection of casual dining gems that put plant-based cooking at the centre of their menu and send out banging vegan dishes all year long.

All the regular vegetarian dishes at Mr Bau are either already vegan or can be made vegan on request. Add to this their Veganuary specials: a katsu celeriac bao, popcorn oyster mushrooms, cabbage yakitori skewers and a sesame aubergine dip with lotus root crisps.

If you’re a burger fan, Fat Hippo has a good selection of five vegan burgers on their regular menu using plant-based patties and vegan cheese, plus a full range of sides. They’ve added a new one for Veganuary: the Sloppy Faux, with Beyond Meat Sloppy Joe sauce. It’s worth checking out the menu just for their strong pun game.

Half of the Mexican-inspired street food at Wahaca is already meat-free and during January they are offering free vegan dishes to try – choose either an Ancho Mushroom Taco or a Zesty Bean Tostada. Claim your dish by signing up for a voucher here.

Wagamama is known for its Veganuary specials; previous dishes include the world’s first vegan egg, watermelon tuna and last year’s vegan fish and chips. This year it’s a vegan ‘chicken’ kare lomen: udon noodles served in coconut broth with a chilli kick, topped with vegan teriyaki ‘chicken’, coriander, beansprouts and cucumber. Even better, they have partnered up with food charity The Bread and Butter Thing to provide one million meals to UK families in need.

We like: Vegan kare lomen: £13.00
Locations: 39 locations across London

Crust Bros focus on wood-fired Neapolitan pizza that you can customise with your own choice of 30 ingredients, making them a great choice for Veganuary. They have three vegan pizzas on their regular menu, a Veganuary special plus ten vegan ingredient options for build-your-own.

We like: the Romagnolo pizza with vegan mozzarella, mushrooms and truffle oil: £12.45
Locations: Croydon, Wandsworth, Waterloo

If you’re in the mood for a meze then head over to The Real Greek, where dishes such as the flatbread, houmous, falafel and chickpea filo parcels are all naturally vegan. To celebrate Veganuary they have a special meze designed by Michelin-starred Greek chef Nikos Karathanos, which includes either a flatbread or crudites, one cold meze, one hot meze and a side; think flatbread, vegan tzatziki, cauliflower yahni and new potatoes tossed with olive oil and oregano.

If you’re looking at Veganuary as a relief from recent indulgence then Ramen Yokocho is the place for you. A cool retro Tokyo ramen bar showcasing regional ramen from all over Japan, it has vegan options throughout the menu plus a special detox menu for Veganuary