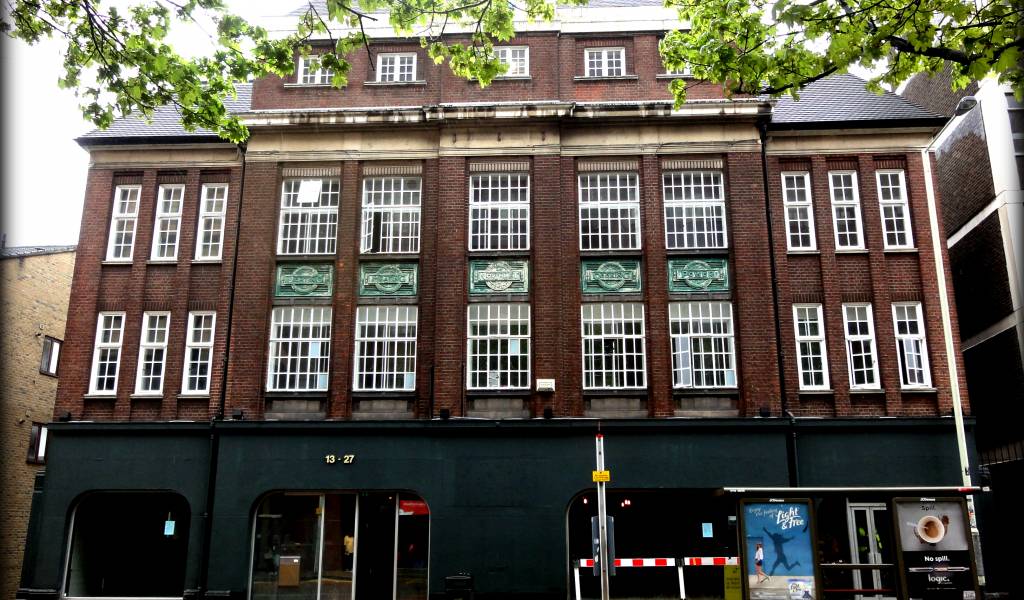 If you’re an artist or a creative, wherever you’re based, chances are you will come to London to work and meet people. Chances are you will also be broke, and struggling to find affordable places to work and stay in. Providing affordable accommodation for artists and the creative community in London is at the heart what the Green Rooms hotel is all about. It’s a social enterprise in Wood Green founded by Nick Hartwright (founder of The Mill.Co Project) and chairman Kurt Bredenbeck, the hotel entrepreneur behind The Hoxton.

Supported by the Mayor of London and Haringey Council, Green Rooms gives priority to practising artists and creatives including actors, writers and musicians. We were given a sneak preview of the hotel before the official opening on May 20th.

It’s an impressive place.  An early art-deco building that used to be home to The North Metropolitan Power and Electricity, with lots of beautifully restored design features along with contemporary design. As we arrive to take a look there is still a lot of work happening, but despite the building work-in-progress status, there is already quite a buzz about the place. It feels somewhere between an airy Brooklyn apartment block and a Wes Anderson film set.  The first guests from Theatre Delicatessen are staying and people say ‘hi’ in the corridors, and we walk past Nick Hartwright who is busy talking to a team of workmen, ably assisted by his dog Missy.

With thanks to Sarah Bennetto for the photos

We caught up with Annette Russell, the hotel’s General Manager

How did you come to be involved with Green Rooms?

I was running a small guest house in Clapton, and I had become a little bored and looking for a new challenge and was looking at doing something else. I read about Green Rooms on the internet, and I just thought it sounded really interesting, and I was familiar with Nick’s MillCo project [a creative co-operative providing affordable workspaces for independent artists] which I think is also very interesting. I tried to understand the hotel version of that, and I just thought it would be a really exciting project to work on. So, I got in touch with Nick and said “I run a guest house in Clapton, but I’m looking to do something bigger, I love the idea, fancy meeting up for a chat?” and that was it, we met up, and I came on board a couple of months ago.

What is your role at Green Rooms?

At the moment, it’s really, really varied because we’re still in the pre-launch phase, so most recently it’s been hiring staff, looking for suppliers, managing some of the reservations that are coming in. It varies day to day: I might have some input on marketing, we’re planning our launch event, we’re doing a gig tonight which I’ve been quite involved in. I think once the hotel is up and running and the staff are in place it will be a lot clearer. But for now, I’m just having to pitch in wherever. Also, when the hotel is up and running we’ll be planning quite a lot of cultural activities and that is something I’ll be overseeing. So, engaging with local creatives, the local community, and international artists to come and programme free events at the hotel, like art exhibitions and theatrical performances, workshops with schools so it becomes a really dynamic environment.

How much does it cost to stay at Green Rooms?

Dormitories cost £15 (+ VAT) per night and those sleep either 12 or 15  with allocated storage lockers and a private lounge.  The private rooms range from £45-£60, with en-suites at the top end and all rooms have WiFi.  There are also two studio apartments with their own bathroom, kitchen and workspace which you can book for £80 per night.

What are the costs of space hire?

It would depend on the endeavour, most hotels that hire spaces would expect you to commit to a minimum spend on food and drink, for a wedding or a birthday party. But for a community-based event or for creatives we offer a discounted rate. The upstairs gallery space starts at £400 (evening hire, it’s £250 in the daytime) which is really reasonable for a room that size in London.

I know preferential rates are given to those working in the arts and creative disciplines, but would you offer the same rates for aspiring creatives who are building up a portfolio of work and are perhaps looking to meet like-minded people?

Yeah, but we have to be able to see evidence that the artist is practising in some way. So as long as they can demonstrate that, then absolutely, we’re always open to having artists at the start of their career, as well as established artists, because they are going to be the big artists of tomorrow.

I gather the intention is to allow artists and performers to contribute to your events programme, what can we expect?

The first thing we’ve got in the calendar is a piece of theatre by students from the Central School of Speech And Drama—they’re basically creating a production in two weeks using the hotel as their set, so it’s a site-specific performance. There is also an art exhibition as a fundraiser for Alexandra Palace, Turkish-Kurdish folk musicians are planning some live music events, we’ve got an audio installation planned for later in the year that will  include memories from locals as part of the soundtrack—there’s loads of ideas being thrown around at the moment.

How will Green Rooms integrate with Wood Green community?

We’re just starting to get to know people now really, inviting them in for a show-around, figuring out who is engaged with the arts in the local area. It’s still in the early stages, but that’s quite important to us.

Any eccentric or notable guests booked in so far? (I gather a troupe of Japanese performance artists are paying a visit)

Yeah, they’re coming soon, I think. No one that eccentric yet, obviously creative people can be eccentric. At the moment, we’ve got Theatre Delicatessen staying ,and we’ve got a South African singer-songwriter who is massively successful called Nate Maingard. He’s quite a cool cat, and he’s doing a short performance at the launch party.

We might be able to do something in the yard, once that’s ready. We might be able to do a little market out there, or invite street traders to come down. But for now, we’re concentrating on the restaurant incubator scheme, which is a social enterprise within the social enterprise. It’s really important for us that it works, and they get all the support they need to go on and open their place, that’s the priority for now.

Aside from affordable space, do you see the hotel  place to foster creative collaboration?

Yeah, that’s exactly what we hope. We hope that the fact that people stay in the dorms, and socialise in the lounge and also residents in the rooms can come downstairs for  coffee something to eat and engage with the cultural programme, which means that they’ll be in the building more perhaps than they would be in other hotels. And so, you know because it’s quite a small operation, it’s easy for us to introduce people and help build new relationships. We hope there will be a crossover among artists and different disciplines as well.

Does Nick or anyone else in the team offer advice to aspiring artists?

He’s really supportive. For example with his work at MillCo he helps out a lot of businesses by giving them space really cheaply, a couple of them will be free, to help them get off  the ground. He’s given some groups the opportunity to start bars and venues. Most of his tenants as far as I can see don’t really leave which is rare in that sort of co-managed workspace environment. So, I think he really looks after people he works with and he’s always on hand and willing to help if he can, he’s an inspiring man.

Green Rooms is open from 20th May with Columbian Street Kitchen as the first in-house restauranteurs.