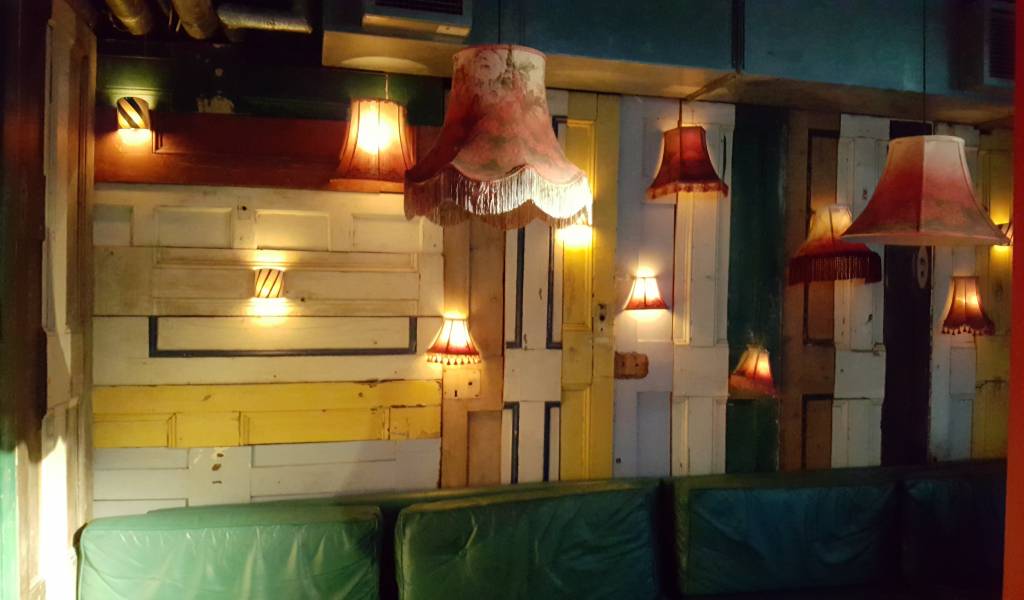 5 Cheap and Unusual Places to Stay in London

Visiting London and looking for somewhere a bit different as well cheap to sleep? We’ve previously rounded up several cheap accommodation options from budget hotels to couch surfing, but a cheapo’s work is never quite done, so we’ve found five unique London accommodation options to get some shut eye while you’re here.

Fancy a night or two in an old courthouse where members of The Clash stood trial? How about a room above a music venue? For something less rock and roll, you can stay in historic buildings for minimal coinage and even find a low-budget nature retreat a short distance from Central London.

The verdict on this colourful hostel is that it’s both cheap and weird. Keeping the judicial theme alive, some of the court panelling and seating are interior features along with neon bar ‘Guilty’ signs on the wall.

Private single or double rooms are £65.00. It may be a little claustrophobic for some, but adventurous travellers can pay for a jail cell for the night for £65.00 a night instead. Both options are pricier than dorms but they’re still in line with budget hotel prices.

Dorms range from 4 to 14 in size with rates starting from £13.00 a night. It’s definitely aimed at a young, sociable crowd and has a bar and plenty of comfy communal space. Guests can make use of the self-catering kitchen or have the buffet breakfast for £2.00. There is free wifi throughout the building, free daily walking tours, and discounted tickets for London attractions from the Clink 78 travel shop.

This Zone 1 hostel is located in the 18th-century former Labour Party headquarters. The exterior definitely looks more like it would place host to Georgian gents than contemporary cheapos, though inside all is pretty modern, with the exception of some bowler hats dangling from the reception ceiling. Safestay is actually a chain, but this is its first and all of their hostels are in historic buildings because why not stay in place with a bit of character just because you’re on a budget?

It looks more like budget chain hotels than backpacker hostels, and also has a mix of private rooms and dorms, cots are available too if you’re travelling with small children. This is probably a better option than livelier alternatives if you want somewhere quieter sleep too.
Safestay Elephant and Castle has communal spaces and courtyard garden too, though the Kensington branch as even more beautiful grounds. Facilities include free wifi, an ATM, a cycle store, and a launderette.

Where: Elephant and Castle
Rates: From £23.00 per night

Music and hotels have been infamous bedfellows for a long time, while it may not be the Chateau Marmont, Hootenanny Brixton has had its fair share of talented guests passing through. The hostel is above an Edwardian pub turned live gig venue, and Brixton is a fun place to explore especially for eating out and nightlife.

As you might expect from pub rooms, the dorms are fairly basic but there is free wifi, free breakfast, bike storage, a common room, laundry facilities and even a book exchange and plenty of live entertainment if that’s your bag.

4. Rest Up, London (The hostel veterans)

Based in Driscoll House, Elephant and Castle, Rest Up has been a hostel for over 100 years. wWen it opened in 1913, it was just for women and children, but anyone can stay there now.

It’s pretty impressive as a space, though they’ve gone a little overboard with the Union Jack decor (it’s everywhere), and there is a massive military drum in the corner of the lounge.

That aside, it’s a pretty smart, contemporary place inside an old building with airy communal spaces, a decent-sized courtyard garden space, plenty of bean bags to nap on, a big lounge  and views of landmarks like the Shard which is close by.

Accommodation here is private rooms (twin bunk or double), and quad- or multi-dorms. There aren’t many amenities but there is free wifiin common areas, an onsite restaurant and bar.

Where: Elephant and Castle
Rates: From £12.00 per night

This one is a little further out, and no, we’re not in London anymore, this is rural Hertfordshire. It’s not far at all though, Chorleywood is on the Metropolitan line and it’s about 35 minutes from Central London.  It’s worth it for a cheap nature retreat, where you can walk in the Chilterns and see red kites flying overhead.

Noth Hill Farm caters for all camping budgets. At the fancy end of the scale is ‘glamping’ which is not really our style, although staying in a treehouse, shepherd’s hut and a beehive is pretty cool—and still at £70.00–£100.00 for two people per night is still better value than most hotels.

But if that’s a little pricey, you can still camp out in relative comfort, cheapo style. If you don’t fancy lugging your own camping gear, and you’re travelling in a small group (4-6) you can rent a teepee for a night under the stars for around £8.00 per person including pitch. There are showers, recycling points, and a coin-op laundrette onsite. There are also plenty of pubs for a post-walk pint and food nearby.

Where: Hertfordshire
Rates: From £8.00 per person