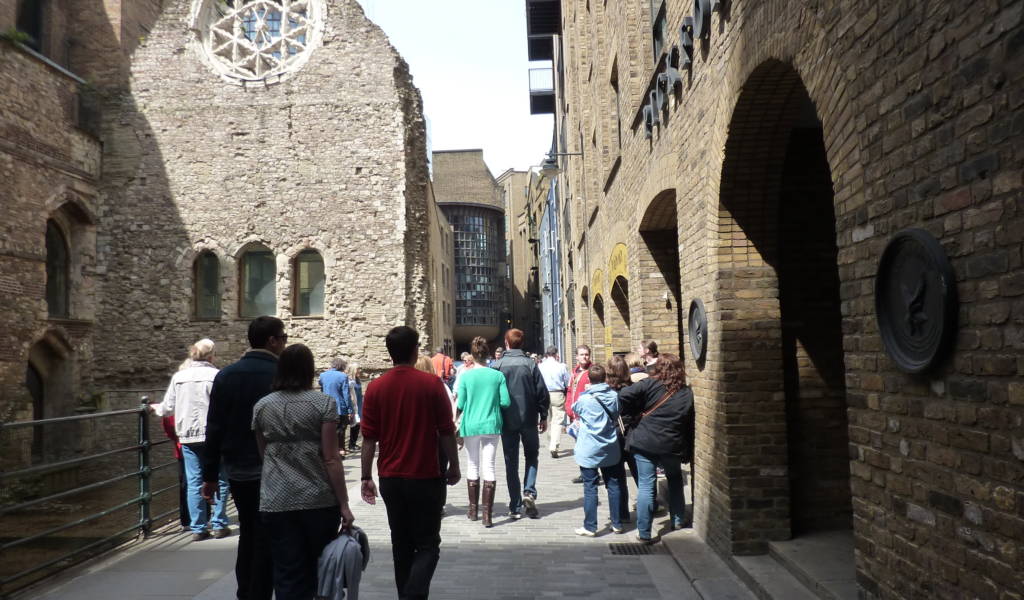 A Stroll Through the Sinful Streets of Old London

Bear pits, gaming houses, serial killers and scandalous royals are all featured on the London City of Sin tour, run by Wonders of London, who put on lots of free (or pay-what-you-can) London walking tours with different themes.

We took a pleasant stroll through the South Bank and some of its lesser-known side streets to discover all manner of sins and historic shenanigans from London’s past. Centuries of vice, mystery horrible history are packed into a couple of hours and a scenic walk through London’s darker side on this sunny Spring evening, courtesy of our host Mark.

A lot of the historic sites no longer exist (fallen to ruins, destroyed by fires, shut down by pesky Puritans—but more on that later), so the tour relies on the imagination of the group and the scandalous stories told by our guide to recreate them.

But, there are plenty of landmarks to see along the way, and if you’re visiting London, it’s a fun way to combine seeing places like St Paul’s, National Theatre, Tate Modern and the Globe Theatre with some hidden histories along the way.

The City of Sin tour certainly features some pretty colourful characters though, here are some of the things we learned along the way.

The South Bank was once a medieval red-light district

The South Bank and the surrounding Southwark area used to be home to the Bankside ‘stews’ (originally a slang word for a pond, then bathhouse and then brothel) from the 12th century until Henry VIII tried to curb the syphilis epidemic in 1546 and shut them down. A little post-tour investigating by your humble scribe reveals some amazingly named women, with the likes of Alice Strumpette and Clarice la Claterballock among the recorded women of the stews.

Over on Clink Street (home of the notorious Clink prison, the oldest in London where many debtors, heretics, prostitutes and drunks were locked up) are the ruins of Winchester Palace, where ye olde Bishops of Winchester collected rent from local brothels. The women there were known as ‘Winchester Geese’.

Back in present-day merry England, we make our down Bear Street, a nondescript side street, and hear all about the Bear Garden (or Bear Pit) to the incongruous strains of Greek music from a nearby restaurant. The Bear Pit was a rickety amphitheatre where bears were chained up, cruelly tormented, and often forced to fight other animals like bulldogs.

Henry VIII might have objected to stews, but he was known to have enjoyed animal-baiting when not horribly deposing of various wives and enemies, of course! Later the diarist Samuel Pepys called such sports “a rude and nasty pleasure.” That’s quite the understatement, Sam.

But 16th-century entertainment wasn’t just about animal cruelty, fortunately. Bankside was Theatreland before the West End. The Swan, The Rose and Shakespeare’s Globe Theatre all lined the riverside.

Fearing for the nation’s morality, those pesky Puritans (like Oliver Cromwell and his chums) had ordered all the playhouses to be torn down in 1648.

You can’t shut down Shakespeare!

The new Globe is the only building in London with a thatched roof since the Great Fire of London in 1666 and was reopened as a reconstruction in 1997.

A few centuries on from the bears and sneaky bishops of the Middle Ages, we look over to the other side of the river for tales of some Victorian city sinners.

On the streets, nary an ankle would be exposed, but all kinds of kinks were happening behind closed doors. But brothels weren’t just for prostitution, there were gay brothels, cross-dressing brothels and even ‘flagellation brothels’ for the Victorian who enjoyed getting whipped.

The tour also features stories about the Romans, 18th-century royal scandals, and 19th-century serial killers. Check it out for yourself at Wonders of London.

Check out our full guide on free London walking tours.