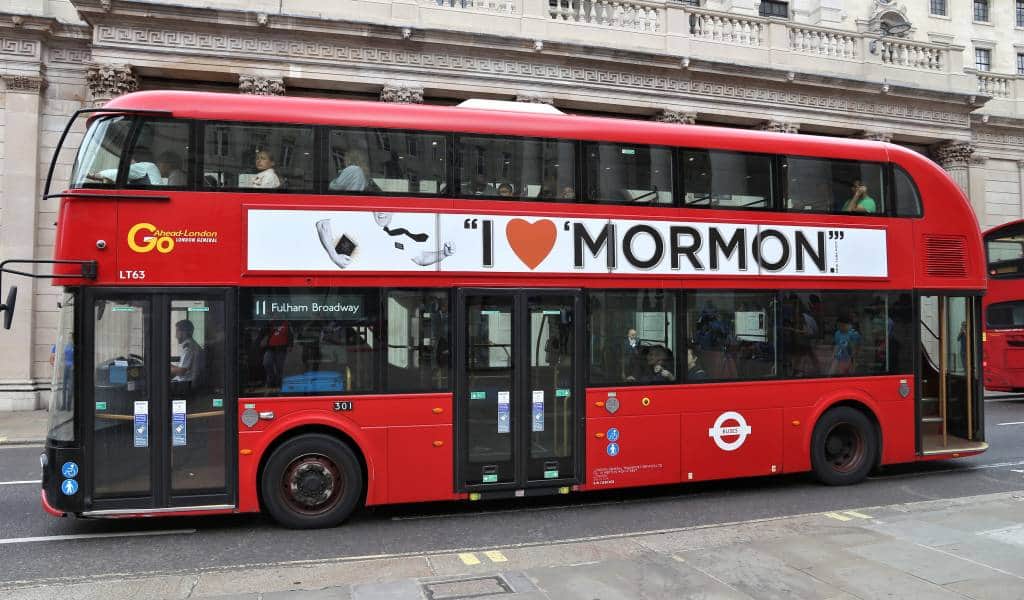 Widely seen as the funniest play in the West End, The Book of Mormon is one of the most successful musicals of all time. It’s taken hundreds of millions of pounds at the box office. But a ticket needn’t break the bank. Follow our guide to snag cheap Book of Mormon tickets.

As a preventative measure against the spread of COVID-19 shows are on on hold for the forseeable future. If you’re booking now, you’re best off picking a date in the fairly distant future.

Feeling lucky? 22 tickets for every performance of The Book of Mormon are allocated to a daily lottery. All you need to do is rock up to the Prince of Wales Theatre box office two-and-a-half hours before the show starts to put your name in the hat. That’s 5 pm for evening performances or at midday for the matinee shows on Wednesdays and the weekend.

Half an hour later the lucky winners will be announced. If successful, you’ll be able to buy a pair of tickets for £20.00 each. The exact seats allocated vary with each performance. But it’s not uncommon for lottery winners to receive front row seats, which normally cost up to £98.00.

The beauty of this option is that–provided you have nothing better to do than hang around Leicester Square for hours on end–you can enter the lottery as many times as you like.

If your schedule requires more than two hours’ notice, this may well be the option for you. Each week, from midday on Wednesday until midday on Thursday you can enter the Book of Mormon online lottery. It’s a chance to purchase a pair of tickets for £20.00 at one of the following week’s performances.

You are allowed to select as many of the week’s performances as you wish–but in the spirit of fair play, you will only ever be allocated one pair of tickets per draw.

You’ll have plenty of time to plan your life around the performance if you are selected, as the winners of each week’s draw are notified by email before midnight on the Thursday.

One thing to remember is that you need to call or visit the box office at least two-and-a-half hours prior to the show to confirm and pay for your tickets.

The Book of Mormon has been running for over seven years in the West End—meaning you can actually buy affordable tickets fairly easily online. Reliable vendors like From The Box Office and Theatre Tickets Direct offer tickets starting at £23.00. They’re not the same prized seats that you can snag in the lotteries. But they’re still brilliant value!

To get hold of the cheapest advanced tickets, you’ll probably have to opt for the Wednesday matinee show, which starts at 2:30 pm. Having said that, there are some very reasonably priced tickets on less popular nights of the week. Think Mondays, Tuesdays and occasionally Thursdays–if you book far enough into the future.

There are 1,132 seats in the Prince of Wales Theatre split across just two levels: the Stalls and the Circle. Thanks to its wide disposition, there are not actually that many bad seats in the refined Art Deco theatre. But there are still a few things you should be aware of.

You’ll find rock bottom advance tickets for as low as £23.00 for eight seats in the Stalls section running from U3–U10. These comfortable seats offer unrestricted views and a fair amount of legroom.

If you go up a level to the Circle section, you’ll find even more bargain tickets. The entirety of rows L and K can be bought for £23.00, as can seats J1–J11 and J36–J46. You may be sitting in the gods with these upper seats, but you’ll still catch almost all of the action from a comfy position with decent legroom.

Having said that, we recommend choosing central seats, if possible. For the absolute sweet spot between price and quality of view, opt for:

For the ultimate Book of Mormon experience, purchase a ticket between D18–D30, E18–E31, F17–F31 or G16–G31 in the Stalls. These central seats will place you right in the thick of the action. It’s close enough to appreciate every nuance of the actors’ comic facial expressions, while still being set back sufficiently to avoid any craning of the neck.

The only downside is that these seats will set you back around £96.00.

Worst seats in the house

There are a couple of seats that you should really try to avoid, as they suffer from safety rails obstructing the line of sight. These are seats A15 and A32 in the Circle. They usually cost around £23.00–£30.00. But given how few other seats suffer from restricted views you should only opt for these tickets as a last resort.