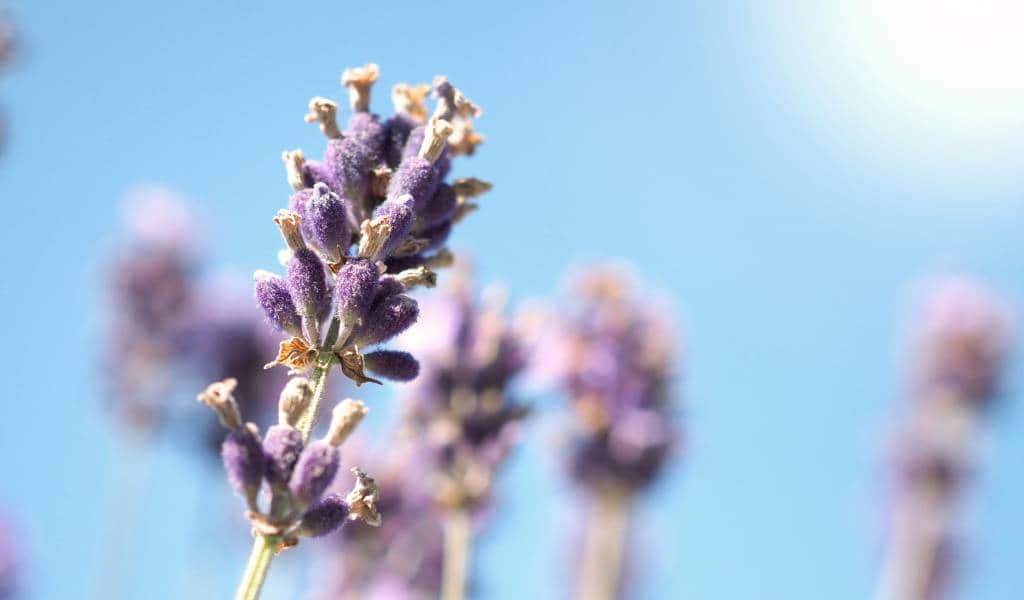 It’s summer, and that means insta feeds filled with the purple haze of lavender. Although the colourful plants are more closely associated with the south of France than the south east of England, there’s actually abundant lavender fields near London too. But it’s not just the stunning colour that draws people to London and the surrounding area’s lavender fields – the purple stuff is fragrant and helps create a sense of calm, aids sleep, and helps to soothe aching joints and muscles. Here’s a few fields for frollicking, photos and aromatherapy to enjoy until the end of summer.

The largest crops of lavender can be found in the suburbs, and a short train ride from central London will take you to Banstead, home of Mayfield Lavender. It’s a 25 acre organic lavender farm which is in boom from mid-late bloom through until the end of August. As well as plentiful purple fields, you can take tractor rides, sample lavender cider, and have afternoon tea. Picnics aren’t allowed, but there is a café and you can pick up bunches of fresh lavender, essential oils and other products. Mayfield Lavender also runs an annual photography competition, so you could snap up a £200.00 prize if you’ve got skills that go beyond main grid filters. It gets very busy on weekends, so visit on a day off during the week if you can.

Another easy trip from London (approx 35 mins from King’s Cross), Hitchin Lavender is a large lavender farm where you can roam through aromatic fields and you’re allowed to pick some to take home too.

One bonus is that there’s more to see as well as lavender and you can bring dogs too (but keep them on a lead and of course, clean up after them!).

There is always plenty of botanical beauty on display at Kew, whatever the season but during the summer months you’ll see deep violet hues of lavender lining the regally named Duchess Border where it grows along the wall of the Duke’s Garden. There are also Lavender patches blooming across the site including The Mediterranean so you follow a fragrant trail around the gardens and find plenty of shade on hot days. It’s not as plentiful as travelling to a lavender farm, but Kew is easy to get to on the Overground and a reminder that there’s some pretty bucolic enjoyment to be had right here in London.

Lavender has been in bloom in the Vauxhall Park since 2003, This was to mark the centenary of Vauxhall Motors and is maintained by volunteers. The purple blooms can reach waist height when the crop is doing particularly well, and it makes for a fragrant spot to take a book or sit with a picnic nearby. Catch the last of the lavender at the start of September and take part in the annual community harvest, where the flowers are picked and turned into oil and cold locally at Lambeth Market. This charming city park is also home to a rose pergola and mini model village for a delightful London afternoon out.

It’s a south London 2-4-1 on lavender spotting, and you could easily park hop between Vauxhall and Kennington Park. Lavender is an important herb for bees, particularly bumblebees and creating a safe home for them is at the heart of why it’s planted at Kennington Park. Follow the scent to the Mediterranean beds and sundial and you’ll be greeted by blue, indigo and violet blooms. The small patch has been thriving in the park for decades and the park is also home to social enterprise Bee Urban who help nurture the local bee popular, visit them at The Hive by the park café if you’re interested in finding out more about how they work.

Lambeth Palace is the official London residence of the Archbishop of Canterbury, but the gardens are open to the public for £5.00 on select open days, typically on the first Friday of the month. It’s one of the largest private gardens in central London and you wander round it’s perfectly manicured lawns and catch the last of the season’s Lavender nestled in the grounds.