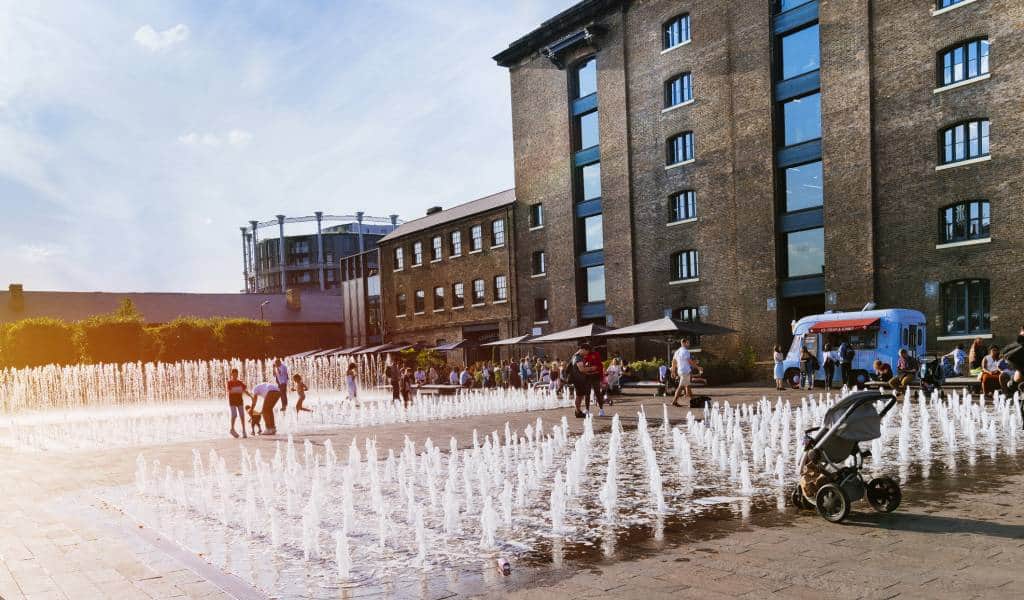 London may have a lot of the café culture of other European capital cities, but it doesn’t have the same public square culture. They’re either super-touristy and crowded (Trafalgar Square, Leicester Square), or smaller parks. But, in recent years, public spaces and squares have been opening up in London designed for socialising and hanging out. They’re an alternative to chain store filled shopping malls, where you can shop, eat, drink and meet up with friends. Whether you’re looking to grab a bite to eat, go shopping or just somewhere to while away a few hours on a Saturday – here’s our guide to London’s best public spaces and squares.

It’s a two-for-one on public spaces in this redeveloped part of King’s Cross. They’re in the same part of the area, close to the station. Granary Square is a big, open space, lined with cafés, bars and restaurants. There are also tables and chairs covered by the natural shade trees if you want to pitch up with a picnic or board games on a sunny day.

Like most open-spaces, it comes into its own during the spring and summer when the fountains spray cooling water. But, there’s plenty to keep you entertained, even on London’s chilliest nights, if you can brave the queues for Dishoom, staff often come out with cups of chai, Caravan is a good weekend brunch spot, and the Lighterman is a large pub overlooking the canal, and both are great if you’re meeting a bigger group.

Coal Drops Yard is a contemporary yard comprising connected cobbled yards, filled with concrete and glass independent boutiques, restaurants and bars. Head to the new places now occupying the old Victorian coal drops under the arches, and check out the glass structure at Samsung KX that connects old and new, and also hosts lots of events and workshops.

This particular area might once have mostly been known for its association with a certain well-loved bear and a major train station – but these days there are more reasons to hang out in Paddington. Just south of Little Venice, Paddington Basin is a recently redeveloped canal nasicn which is home to restaurants, bars, a floating park and architect Thomas Heatherwick’s impressive Paddington Basin Bridges which are both large-scale moving sculptures that you can see in action on Wednesday, Friday and Saturday afternoons.

The area is also home to Merchant Square, which is home to loads of restaurants, cafés, and bars as well free film screenings in the summer and communal ping pong tables. And if you’re looking for more adventurous pursuits, gather your friends for a bit of canalside zorbing.

As the name suggests, the area is a circle, rather than a public square. But, its purpose is the same: it’s a place where people gather to eat, drink, shop, and hang out with friends. Despite being smack bang in London’s financial district, Broadgate Circle is not just for the suited and booted workers of the area.

There’s plenty of outdoor space for dining from modern Portuguese at Bar Douro City, Lebanese at Comptoir Libanais or Vietnamese at HộP. You can even pop into a mobile hair salon (it’s in an airstream, but we’re assured they can handle more than a blowdry!) The area is also home to the UK’s first branch of Eataly, the international Italian food market and restaurant.

This part of South West London has had a massive regeneration over the past few years, and although much of it has become ‘luxury flats’ – the riverbank is like a mini Southbank with lots of food, drink and entertainment. During July and August you can watch films under stars at The Coaling Jetty and there’s usually seasonal food festivals too. Elsewhere, enjoy dinner with a riverside view at the Waterfront Bar & Brasserie, try seafood at Wright Brothers or sip craft beers at Battersea Brewery.

It’s easy to get to now, thanks to the opening of two new stations on the extended Northern Line, so you can go to either Nine Elms or Battersea Power station on the Charing Cross Branch.

You might think Islington had all the restaurants, bars, and pop up any London neighbourhood could need. But, it turns out, you can always add more. The one thing this converted postal sorting office has over the main drag on Upper Street is a large terrace which is particularly good for eating alfresco on sunny days, and also home to market stalls at other times of the year too. During the summer months, there is usually a programme of open air events too including Saturday acoustic sessions. Food wise, there’s plant based offerings at Omnom, Japanese meets Middle Eastern flavours at JiJI, and Megan’s mediterranean-inspired menu is a popular spot for weekend ‘bottomless brunch’.