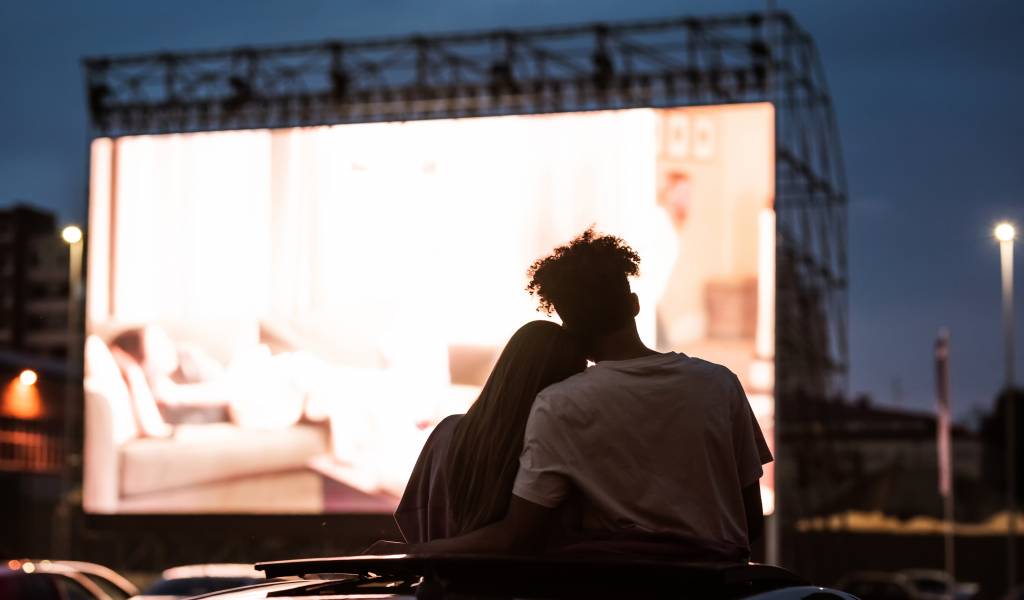 Communal film watching is back on in London this summer, after a long wait. Cinemas will open their doors again from 17 May, but watching films outdoors is a staple of any London summer. It was especially welcome last year, and is back once more in 2021. From drive-in movies, to films with a view, to mini festivals—here’s our round up of the top outdoor cinema events in London.

For most Londoners, the concept of drive-in movies was something that happened far away in America—until 2020 that is. But with cinemas shut for much of last year, it reached UK shores (or rather carparks) too. The people behind Rooftop Film Club are back for more drive-in film action this summer. You can park up at either Alexandra Palace or Brent Cross to catch a varied programme throughout May, from big blockbusters like Black Panther and Crazy Rich Asians to cult classics like Dazed and Confused and Labyrinth, and more recent releases like Saint Maud.

Another drive-in movie event that was popular in 2020 pulls up to west London again this summer. Drive & Dine is part of Alfresco Theatre at the beautiful Syon Park, with a line-up that also includes live comedy and food courtesy of top chefs including Tom Kerridge, Rick Stein and Atul Kochar. The cinema line-up is mostly feel good and mainstream movies like Bohemian Rhapsody, Dirty Dancing, and Ferris Bueller’s Day Off.

You don’t have to be a driver to enjoy outdoor cinema this summer. May marks the return of the ever-popular Rooftop Film Club at Bussey Building Peckham and Rooftop East. But be quick about it, some screenings are already sold out! Grab a deckchair for city views, sunsets, food and drink—and an eclectic programme of films including Sound of Metal, Bridesmaids, Pulp Fiction, Casablanca, and American Psycho.

The UK-wide outdoor cinema organisers are back in London this June and July for more films in leafy locations.

In June, head to Streatham Common for a mix of afternoon, family-friendly films like The Greatest Showman Sing-Along, The Lion King, and Harry Potter and The Philosopher’s Stone, as well as evening screenings of Grease and Pretty Woman.

The Osterley line-up in July is two weekends of musical sing-alongs of Grease or The Greatest Showman, if that’s your jam.

Bring your own blankets, camping chairs, cushions and snacks.