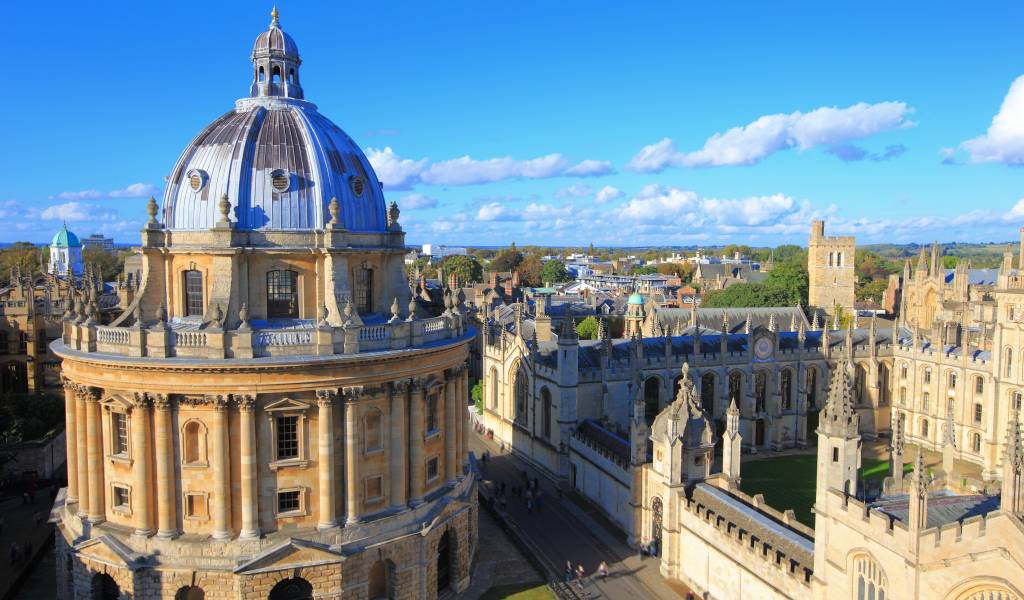 Spend a day in Oxford, the ‘city of dreaming spires’, to live out your literary, wizardry or historical fantasies (or your academic ones, if your exams didn’t quite go to plan).

Established in the 12th century, Oxford is one of the UK’s most well-known cities, and a pure daytrippers paradise when it comes to sights (and snacks). The university colleges, the libraries, the rivers—it’s a chocolate-box, coming-of-age-film dream. In a city with this much history, planning pays off. We’ve got Shakespeare’s favourite pub, numerous Harry Potter sets, Inspector Morse spots, and the UK’s oldest museum. Be sure to leave time in your Oxford day trip itinerary to wander down some winding streets or imagine what four As and a suspicious number of extracurricular activities could have gotten you…

A city with this much to see has a steady supply of walking tours to choose from, covering the city’s landmark buildings, movie monuments and TV drama hotspots. Choose from evening ghost tours, literary history tours and student life tours, along with options to learn about the city’s German history.

Of course, you can walk around the city for free using a city map, but you won’t get all the fun facts and horrible histories of the streets. Be sure to check out the most popular sights, like climbing the tower at University Church of St Mary the Virgin and visiting the Radcliffe Camera.

Take a punt on Oxford’s waterways

Some clichés are best avoided and some are best fully embraced, and punting in Oxford is certainly the latter. A popular pastime since the 1880s, the small boats are propelled along the water with the use of a pole rather than oars.

The Magdalen College Boathouse rents out punts for £25.00 per hour, with up to five people per boat. From here you can follow the River Cherwell behind St Hilda’s College and towards Christ Church Meadow, stopping for a picnic if you have the time (and the sandwiches). If you’re looking to skip the crowds, the Cherwell Boathouse is a little farther north with more open surroundings, while routes along the Thames are available from Salter’s Steamers at Folly Bridge.

While many of the University of Oxford buildings will be included in walking tours, those with a particular interest in the world-famous institution can dive a little deeper. There are (in regular times) many events held here as well as opportunities to enter some of the colleges, museums, parks, churches and libraries.

Fun for that Harry Potter feel, the 38 university colleges are truly beautiful and wandering through them is a pretty impressive introduction to the city and its history. Be sure to check opening times for colleges as they are open only a few hours per day, with some accepting appointments only (such as Queens, St Cross and St Hilda’s).

The four free museums at Oxford

The university has four museums, which are all free to enter, with some additional charges for special exhibitions or events. One of the highlights is the Ashmolean Museum, which is the oldest museum in the UK and one of the oldest in the world, having opened in 1683 and showcasing antiquities and art held by the university. The Oxford University Museum of Natural History and History of Science do largely what they say on the tin, while the Pitt Rivers Museum focuses on anthropology and archaeology.

For some art, you can visit the Christ Church Picture Gallery for £5.00 (£3.00 concessions), with a 50% reduction for those who have paid to enter the grounds.

There are a couple of famous gardens also owned by the university, including the country’s oldest botanical garden, located on High Street. Just outside the city, the Harcourt Arboretum is home to a diverse forest with one of the most beautiful bluebell woods in the UK. Both are £4.00 for concessions; £5.45 for adults; and free for children in full-time education, university employees and students.

For some free greenery, you can enjoy the University Parks, bordering the River Cherwell, and Christ Church Meadow are great spots for picnics.

You don’t have to be a bookworm to see the beauty of the Bodleian, the University of Oxford’s primary research library. The library is one of the oldest working examples in Europe, with countless priceless manuscripts and texts safely stored and cared for across multiple sites. Shakespeare’s first folio, the letters of Percy Shelley and the Vernon Manuscript are just a few of the institution’s prized pieces, but the architecture itself is enough to wow even the most unconvinced visitors.

The university’s library history began with a single room back in 1320 and expanded over the centuries, with Thomas Bodley responsible for a significant development to the collections and buildings in the 16th century. Today the Bodleian is part of a network of libraries, but tours are available for some of the most historic buildings, including the Divinity School, Duke Humfrey’s Library and the Chancellor’s Court. Tours are available for either 30 or 60 minutes, at a cost of £9.00 and £12.00 respectively.

Have a pint at Oxford’s historic pubs

Whether it’s a 13th century drinking spot or had once served Shakespeare, there’s a pub for everyone in Oxford—and what better excuse for a pub crawl than historical sightseeing? One of the oldest is The Bear Inn, serving in its current form since the 17th century and believed to have a drinking establishment on the site since 1242. It also has a slightly bizarre collection of over 4,000 tie clippings that were once traded for drinks, if that adds to your intrigue at all.

Another ancient alehouse is the Turf Tavern, which has been pulling pints since the 14th century and was frequented by Inspector Morse himself. For a more literary (and less certifiable) guest list, head to the The Crown, said to be the pub of choice of none other than William Shakespeare, on Cornmarket Street.

Unfortunately, fans of C.S. Lewis, Tolkien and Charles Williams eager for a swift one at the famous Lamb and Flag are out of luck. The pub, which was a regular meeting spot for the literary group the Inklings, permanently closed in January 2021 after more than 400 years.

Escape to the country at Blenheim Palace

A day trip from the day trip, Blenheim Palace is a particularly glorious UNESCO World Heritage Site about 20 minutes from Oxford. Built in the early 18th century, the palace was once the home of the Churchills and is the seat of the Duke of Marlborough. Having almost fallen into ruin in the 19th century, it was saved by a fortunate marriage between the 9th Duke of Marlborough to an American railroad heiress called Consuelo Vanderbilt Balsan. If that’s not the making of a period drama, we don’t know what is.

The grounds are home to formal and walled gardens, a giant hedge maze, a miniature train, and family-friendly trails—and seasonal talks are the icing on the cake. Inside, you can view state rooms, stables and the Churchill exhibition with extra tours for those wishing to see the Marlborough family’s private apartments (including secret corridors—this drama has to happen). They also host exhibitions and have a seasonal drive-in cinema (depending on restrictions), so check what’s on their events list to see if you can double up your day.

Tickets can be quite pricey (£29.50 for adult palace, park and garden access), but if you spend a full day here it’s easily worthwhile. If you’re happy to see the grounds and gardens, it drops down to £18.50. There are, of course, reductions across ages and concessions.

For a darker side to this pretty city, the Oxford Castle and Prison takes you back to the days of battles, debtor’s prison and gallows. Selected as a castle site by the Normans following the Battle of Hastings in 1066, the original wooden motte-and-bailey castle was later replaced with stone at the start of the 13th century. As military value in the site faded, it was used as a prison, going on the be largely destroyed in the civil war and rebuilt as a prison, not closing until 1996.

With a 900-year-old crypt, a debtor’s tower, unique displays, stunning views from St George’s Tower, and relics of the original castle, there’s plenty going on. Tickets include a guided tour and cost £14.45 for adults, with reductions available.

Thanks to a bustling combination (previously, at least) of students, locals and visitors, Oxford has a plethora of trendy cafes, bars and restaurants. If you’re visiting for the day, then you may find it hard to choose between them, but all that walking demands a coffee break or two!

Brunch and lunch options in Oxford

The city staples are often busy but worth the wait, so grab a coffee or a seat for brunch at The Missing Bean or Handle Bar Cafe & Kitchen. Both serve excellent (and ethically produced) coffee, brunch options and delicious cakes and that certain Oxford hipster charm.

Jericho Coffee Traders are of a similar lovely vein, and has grown from a moped coffee cart to a dedicated espresso bar with am impossible array of cakes to choose from.

A little out of the way, family-run Bannister’s is a great brunch spot that’s a little less crowded but does a smashing full English, pancakes and the ever-popular avocado on toast.

If you’d rather stay outside and enjoy the city, Oxford was basically made for picnics by the river. Head to a local bakery or cafe like Barefoot or Gatineau (or the brunch spots above) to pick up your supplies and grab a shady spot in Christ Church Meadow to relax.

For a half-in/half-out option head to Vaults and Garden, which offers picnic blankets to diners and fabulous views of the Radcliffe Camera.

If the pubs mentioned above don’t float your boat, rest assured that Oxford has more than its fair share of bars (almost as many as we do clichéd phrases). The bright lights of Kazbar on Cowley Road draw you in for cocktails and tapas. The Varsity Club has a rooftop bar you’ll not want to leave. And the Oxford Artisan Distillery in South Park is a winner for gin lovers.

Over in Botley, the Tap Social Movement serve criminally good beer (and help those recently released from prison too), with a second and more centrally located venue called The White Horse serving as a community cafe, bar and kitchen.

Oli’s Thai is tricky to get into but worth the reservation attempts, while Arbequina (same owners) has tapas that’s comes on doctor’s orders (well, the chemist’s at least, according to their shopfront).

From London, Oxford is an easy option thanks to direct trains and buses that run frequently and are surprisingly affordable. Trains can be as low as £5.00 when booked in advance, with the return 1-hour journey costing up to £28.80 full price. Check out our guide to railcards if you like the sound of a 1/3 discount though!

If you prefer a coach (or balked at the full-price train ticket like me), then National Express has your back. Tickets are around £11.00 each way, and the journey takes two hours. These tickets are currently flexible and refundable, which is especially handy in the current world of restrictions and dream-dashing weather forecasts.