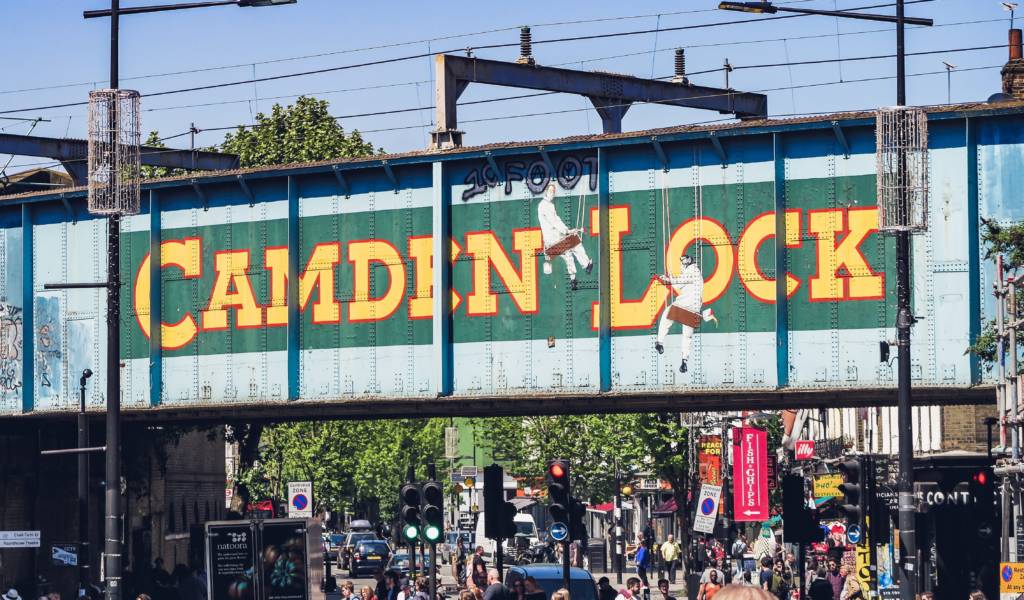 Ten Free and Cheap Things to Do in Camden

A visit to Camden can be quite an assault on the senses. Its colourful shop fronts, odd aromas and booming sound systems can hit you in the face all at once. But it’s always been a place that celebrates alternative culture and rewards the determined bargain hunter, thanks to its long history of music and market culture. From market stalls to canalside strolls, here are ten things to do in Camden without parting with a lot of cash.

Look up at the shop fronts

Very few London high streets have shop fronts quite like the ones on Camden High Street. Street art isn’t just found on the walls, it’s practically jumping off them around here. Most of them began appearing in the early 90s, with giant signs and figures representing what’s inside each shop. Look up as you wander from the underground station to the markets, and you’ll see racy, lacy gothic ladies above The Dark Angel, some happy-faced fruit at a juice bar and some massive biker boots.

Camden Market is actually a collection of markets. The older, more famous market is best known for gaudy t-shirts, incense sticks and booming stereos. Camden Stables Market is a more interesting mix of bizarre shops and small restaurants, food stalls, vintage clothes and gifts. Thousands of people visit the market each weekend, so pick your times wisely. That said, the network of different yards means there’s always an interesting nook to dive into if it gets crowded.

Take a stroll along Regent’s Canal

After you’re done wandering the markets in the Camden Lock area, take a walk down Regent’s Canal. On a sunny day, it’s a good spot for people watching and taking it easy as boats drift by. It’s also a more pleasant way to get to other areas than pounding the pavement at street level.

You can walk west to meet the start of Regent’s Canal at Paddington, or head the other way towards King’s Cross and Angel. Look out for the Feng Shang Princess, a floating Chinese restaurant, and Word on the Water—London’s only floating bookshop.

A museum dedicated to the stories and history of Jews in the UK. Permanent exhibitions include an exploration of events from the Norman conquest in the 11th century right up to the 21st century. The museum also hosts events, from stand-up comedy gigs to talks and craft sessions. Tickets are £8.50. It’s worth noting that the Museum closes early on Fridays for Sabbath.

Wander up to Primrose Hill

When the bustle of Camden streets all gets a bit much, head for the natural high of Primrose Hill for green space and some pretty sweet city views. It’s a perfect picnic or sunset spot, but if you’re feeling more active, there are tennis courts, netball courts and running tracks in the park and neighbouring Regent’s Park.

Do a pub crawl

Whether you want to see bands in sweaty backrooms, or just hang out in old boozers, Camden is full of pubs, with minimal walking (or stumbling) between each. A classic first stop is The World’s End, a huge pub right by the Underground—the perfect gathering point if you’re in a group. Downstairs is the rock/metal venue “The Underworld”.

For a smaller drinking den, with bands on in the back, head on up Parkway to The Dublin Castle, it’s cheap and friendly with old band posters lining the walls. If it’s a sunny day, keep going up Parkway, hang a left on fancy Delancey street and then look over to Mornington Terrace where you’ll find The Edinboro Castle. You’ll be rewarded with a large beer terrace and a few wooden booths for summertime hangouts.

Once you’ve done that end of Camden, wander up the High Street towards Chalk Farm. There you’ll find The Monarch, a very big pub full of comfy seats, tucked away nooks and enough space for a dance. Which is just as well with live music seven nights a week, and club nights at the weekend. The Chalk Farm end of Camden is also home to bar and venue The Lock Tavern, which has a little roof terrace and is open until 1:00am on Fridays and Saturdays.

Eat on the cheap

New and exciting vendors keep popping up at the market hall in Camden Market. These include the likes of Lords of Poke, Young Vegans Pie Shop, KERB, and The Cheese Bar, where you can get a decent feed for under a tenner. Elsewhere What The Pitta sells vegan kebabs, falafel, and couscous salad boxes, all for under £8.00. Those with more omnivorous cravings can satisfy them with American fried chicken at Bird or burgers at Haché.

Hang out at the Jazz Cafe

One of Camden’s most beloved live and late venues, with gigs on every night of the week. It’s not just jazz, so depending on the night you can expect to hear hip hop, funk, soul, disco, dub, electronic and experimental music. Weekend club nights go until 3am, and you can watch shows from the upstairs restaurant too.

Get moving at the Ceilidh Club

Camden’s Cecil Sharp House hosts ceilidhs (pronounced kay-lee) around once a month. It’s the Gaelic word for a gathering, and is an energetic evening of Celtic dance too. Absolute beginners are warmly welcomed, and will be more than warm by the end. Everyone gets a bit sweaty and in a spin as callers guide them through the steps over three hours of dancing.

Another way to see the sights along Regent’s Canal (or simply move between neighbourhoods at a more leisurely pace) is to go on traditional narrowboat. Walk ups are limited, so book online in advance. Hop on at Camden Lock and the London Waterbus Company will take you the pretty west London area of Little Venice. Keep an eye out for London Zoo and Regent’s Park along the scenic, hourlong route. Tickets cost £12.00 per person.