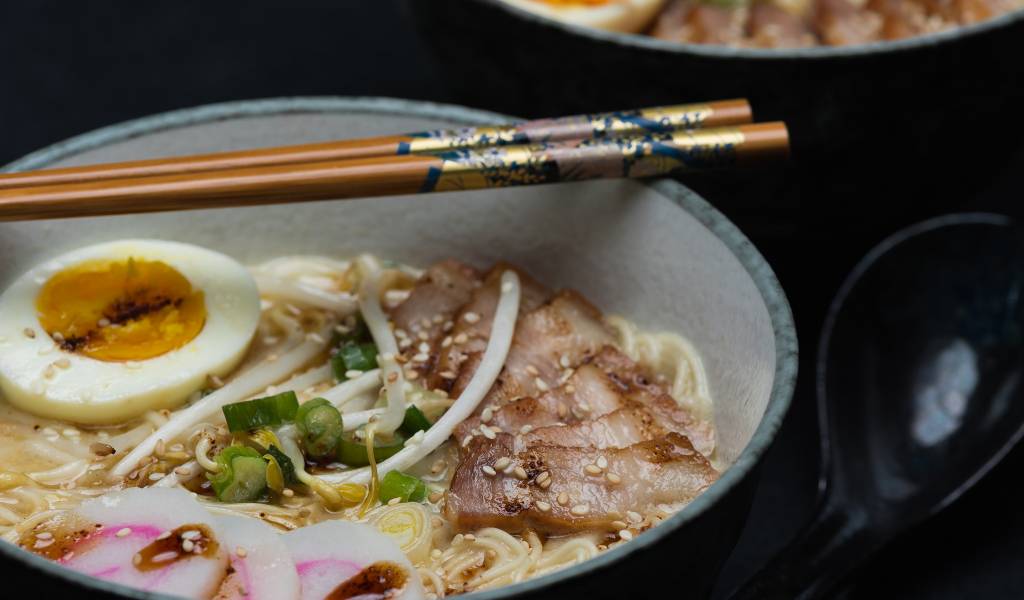 Where to Find Cheap Japanese Food in London

Japanese food is all the rage but sometimes the prices are eye-watering, which is all the more galling when you know these foodstuffs are knocked up at a fraction of the price in Tokyo. Luckily, there some Japanese restaurants in London where you can get a taste of Japan without paying through the nose.

Japan Centre opened its new store on Panton Street in September, based on a traditional depachika (basement department store food hall). You can buy all the staples needed to cook Japanese food at home as well as imported Japanese sweets and sake, but you can also pick up reasonably priced sushi, steamed buns and matcha (green tea) soft-serve ice cream. A top tip is to wait for later in the day to pick up discounted sushi. Also make sure to try the takoyaki (fried battered octopus balls), available by the entrance at £5.20 for six.

There are lots—and we mean looOOoots—of places in London doing ramen these days. But generally the prices start at upwards of £10.00, and that’s for your very basic styles. So leap at the chance to get a bowl of Shoryu’s Ganso Tonkotsu ramen, with pork belly and egg, for just £5 on Sundays and Mondays at the Covent Garden and New Oxford Street branches. Shoryu does other deals, like 2-4-1 buns and matcha sundaes, and a lunch set, but nothing quite beats the value of that ramen.

Looking for Japanese lessons?JapanesePod101.com is a great place to start. We’ve used it and found it to be really helpful.

As well as doing some reasonably priced favourites—the chicken karaage with honey miso dip (£6) is to die for—this Brixton joint does some excellent deals. Go for lunch on Tuesday-Friday and you can snaffle a bowl of veggie ramen for £6, and there’s 25% off all food between 5pm-6pm every day. Yep, 25% off tsukemen, Sasebo burgers and whatever fish is good on the market that day. And if that’s not enough, 5pm-7pm is drinks happy hour.
Nanban: 426 Coldharbour Lane, Brixton, SW9 8LF

We’re staying in Brixton for some okonomiyaki and heading over to Okan. What’s okonomiyaki? It’s a savoury pancake, griddled up with shredded cabbage, meat and veg, then topped with a Worcestershire-style sauce, mayonnaise, bonito flakes and seaweed flakes. And it’s addictive.

Okan is a tiny place and you may end up sitting on upturned plastic tubs outside (it’s in Brixton Village, so at least it’s covered). You can bag a veggie, squid, pork or beef pancake for £8, and it’s big enough to make you waddle afterwards. They’re made Osaka-style, after where founder Moto grew up.
Okan: Unit 39 Brixton Village, Brixton, SW9 8PR

Wagashi sweets are a great way for a small hit of Japan. In terms of price they’re not comparable with a Twix and we wouldn’t suggest bagging one every day for a quick snack. But Minamoto Kitchoan’s two London shops sell exquisite mochi, jellies and other seasonal treats for a few pound coins to satisfy Nippon cravings.

Taiyaki is a fish-shaped cake made from waffle batter, poured into a mould and filled with custard or bean paste. There are two places in Chinatown that make them (and you can watch the machine in action through the window). Bake has more range, offering four taiyaki with custard for £2 or, for a little bit more, with Nutella or red bean paste. This is also the place that sells green tea-flavoured soft-serve ice cream in a large taiyaki ‘cone’, or in a bubble egg wrap.

Chinatown Bakery sticks with the basics: four small, filled taiyaki for £2. Though—from personal experience—if you want your taiyaki filled right up with custard you’ll have more luck in Japan than with either of these two. Still, it’s the experience that counts.

A glorified takeaway with huge photos of Fuji adorning the walls, this place has a few tables where you can tuck into vast plates of yakisobi, udon and curry for £5-£6, or get a bento box for a tenner. The pumpkin korokke is also pretty good, and £2. There are authentically Japanese soft drinks, too.

In addition to a Japanese supermarket, with everything from frozen gyoza skins, wasabi paste to fresh meat and fish, Ichiba features a variety of Japanese eateries, cheapo food court style.