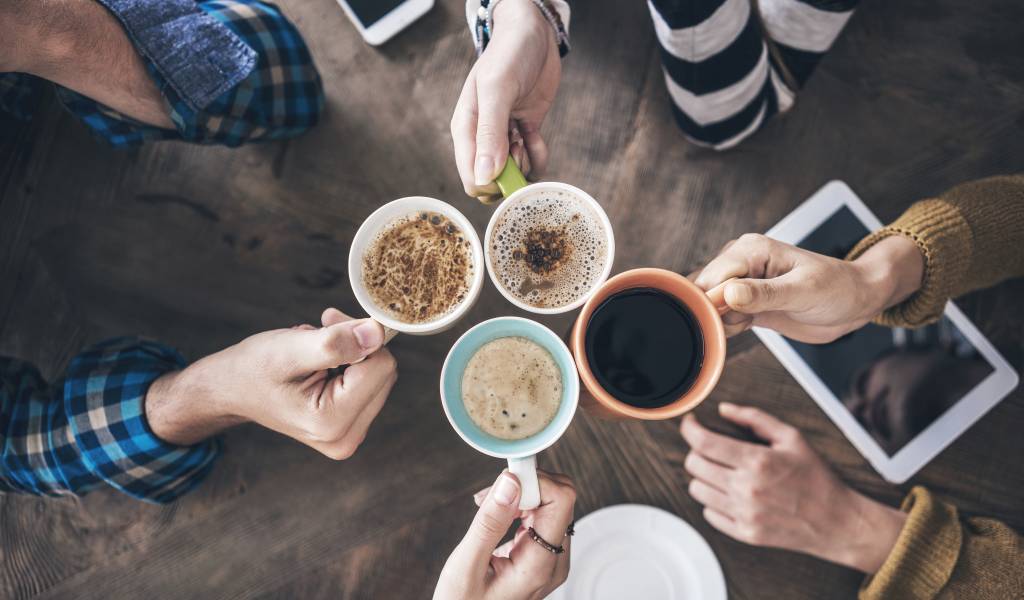 Five Community Cafes in London for Bringing People Together

Sometimes it feels hard to avoid the chainification of London’s food and drink options, but venture away from high streets and train stations and you’ll find its independent cafe scene is very much alive. Community cafes in London are more than just a place for a decent (and not over-priced) caffeinated beverage. They are about bringing people together, and are usually run by volunteers. Here are a handful of the cafes serving locals, putting on events and being generally friendly places to spend time.

The social enterprise, 100% vegan cafe is open 7 days a week, tucked just off the bustle of Brick Lane. As well as the cafe itself, Canvas is also a community hub and creative space. The cafe menu provided by chef Tegan the Vegan includes ‘tofish’ and chips and pulled jackfruit sandwiches. They’re open into the evening too, serving cocktails for around £7. Larger mains are better value than the fancy breakfast options.

Owner Ruth Rogers opened The Canvas in 2014, to support new ideas, provide a sense of community and improve the lives of others. Since then, its hosted supper clubs supporting refugees, staged performances to support mental health and weas named London’s first Happy Café in 2015. Other events include drop-in choir, body confidence classes and mindfulness workshops.

A small, Bohemian, community-run veggie and vegan cafe in Vauxhall. It was opened in the mid-80s to serve locals, many of whom were squatting. It’s still a community place, run by a co-operative of rotating cooks from all over the world.

Bonnington Café is a cosy home from home with a varying menu of cheap food. It’s a place for those who like a side order of surprise with their food. You could turn up on one night and get a Japanese feast, French or Italian food on another and even a Medieval-inspired menu while someone plays the piano or recites poetry. Expect to pay around £8 for a main.

BYO (bring your own) corkage is free, but a 50p glass donation is requested. Book ahead (it’s not confirmed unless the daily cook has replied) and bring cash with you, as they don’t have a card machine.

Although it’s smack-bang in the middle of the Old Street tech industry, Central St Cafe puts community before commerce. It’s a charity (part of St Luke’s Trust) where the profits provide healthy, subsidised meals to over 11,000 elderly residents in Islington each year. The cafe is also committed to the London living wage for its staff, as well using sustainable, ethical ingredients for its menu.

You can expect all the usual breakfast/brunch items like smashed avocado on toast and if you’re after a cheap, quick lunch mug of soup is £1.50. The weekday breakfast menu (from £2.50–£5.50) is far cheaper than the weekend menu, so bear that in mind if you’re planning a visit, lunch ranges from £3.80–£7.00. Hot drinks are all under £3.00 whether it’s builder’s tea or a flat white, so it’s cheapo caffeine win.

Going out for coffee or cake under a flyover isn’t an obvious choice for a hangout, but Cafe Nova also looks over the more picturesque Portobello Gardens. It’s the area’s first social enterprise eatery and has been operating since 2012.

Staff are from the North Kensington borough and the cafe supplements the work of NOVA New Opportunities—the charity behind the project, who specialise in adult learning and helping residents into employment.

As well as a menu that includes breakfasts from a full English to the more exotic Mexican scrambler, sandwiches and salads for around £4.00 (oddly lunch seems to be 30p cheaper than breakfast) there is a play area for kids, regular art exhibitions and special events.

This café, located in south-east London, replaced Good Hope Café in August 2020, which was a community cohesion project, dedicated to the memory of Jimmy Mizen, who lost his life in an unprovoked attack in 2008. His parents, Barry and Margaret wanted to promote messages of peace rather than revenge and started the cafes as a way of empowering young people.

Hot drinks range from loose-leaf teas to flat whites, espressos and lattes all around £2.00 and the cafes also serve cake, breakfast and lunch (menus not available on their websites).