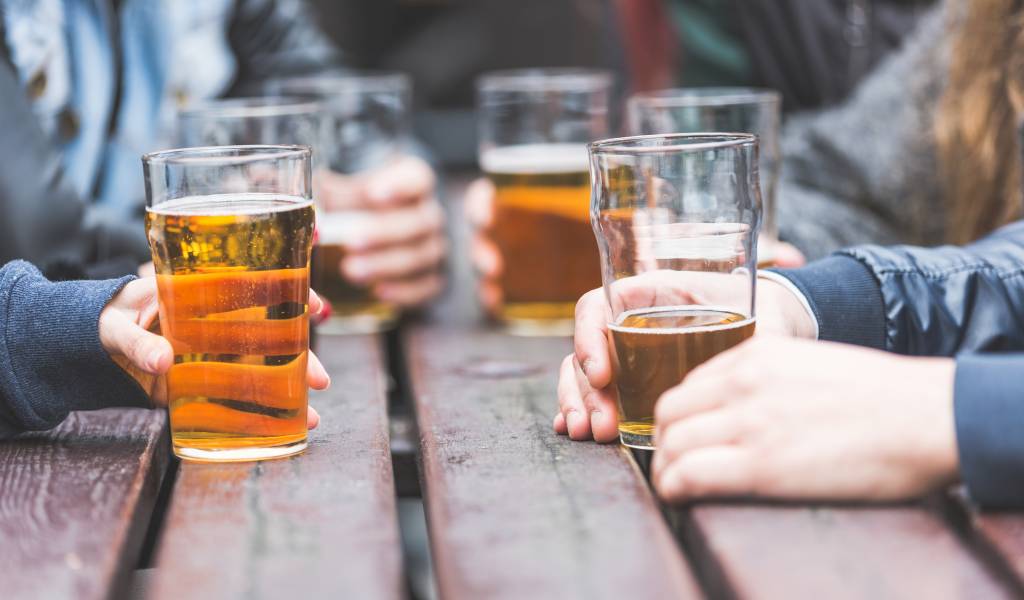 London types like their booze like they like their wit: dry, on tap and with the odd cheap shot. That may not be entirely true, but just watch their eyes light up at the words happy hour.

Here we round up a few of the happiest hours in town. Whether you’re north, south, east or west, there are wallet-friendly cocktails, pints and glasses of vino to be found.

A little slice of affordable decadence amid the chaos of Shaftesbury Avenue, The Ape & Bird is really three places under one roof. Venetian sharing plate restaurant Polpo are upstairs, the main bar serves pizzettes and Spritzes and downstairs is the dimly lit speakeasy, aptly named The Dive Bar.

This is a place to unwind with a crisp aperitif cocktail in hand. Pop in for Spritz hour where you can sip on London faves like an Aperol Spritz and Negronis for a fiver. Sweet prices, for people who like a sour twist in their drinks.

When: Daily from 4pm-6pm
Best deal: £5 drinks on the Spritz menu

Unlike most places with membership in London, The Social is both budget friendly, and anti-elitist. Sparse, unpretentious retro decor and a pretty decent tiny music venue downstairs makes this a rare decent hangout in the Oxford Street area. To get your hands on the drinks deals, you have to be a member. But the good news is it’s free and you just send them an email to get it. Use it to get 2-for-1 on all draft beer and cocktails every day until 8 pm which works out at £2.50 for beer and £4.50 for cocktails.

Simmons is gradually taking over the city, starting with the tiny cafe/bar in King’s Cross in 2009 to spreading to Soho, Fitzrovia, Camden, Balham, Temple and  Liverpool Street. Better still, they’re taking their happy hours with them. Now, happy hour is generally a couple of hours rather than one, but Simmons go even further with five hours of cheap drinks from 4 pm to 9 pm, Sunday to Friday. They also do two cocktails for a tenner on Saturdays, making them one of the few venues to offer deals every night of the week. Cocktails in teapots, spirits and bottled beers for £2.50 and bottles of wine for a tenner, what’s not to love?

Like Simmons, Barrio Bars are popping up around the city, but Angel is one of the originals. These brightly coloured, kitsch bars also have static caravans “La Caravana” large booths to drink discounted drinks in too. Barrio bars offer a very friendly Amigo Hour daily until 8 pm and all day Sunday and Monday. Drink potent, zingy cocktails called things like Catch The Pigeon and Hula Colada for £5.50 or selected beers for £3.50 and £5 off house bottles of wine. Food options are a little more varied in some of the other venues, Shoreditch does tacos for £6 if you’re looking for some bites to soak up the booze.

There are Barrio deals south of the river in Brixton, east in Shoreditch or central in Soho too.

When: Daily until 8 pm, all day Sunday and Monday
Best deal: It’s a cocktail bar, so go for £5.50 cocktails

Divey, American rock bar for whisky fiends. Not especially cheap during regular hours, but this is all about happy hour and that means 2-for-1 cocktails, as long as they’re the same. Their happy hours are slightly oddly timed but the offer applies every day apart from Saturday.

A proper old London boozer close to London Bridge, which describes itself as a “good old fashioned pub with a warm, friendly atmosphere.” You know what else is friendly? The happy hour prices. At under three quid (£2.75) for all pints and spirits and mixers, you’ll be hard pushed to find a better deal in this (or any other) part of town.

Eighties retro bar near Tower Bridge, but off the main drag with a couple of downstairs karaoke rooms.  This is a cheap and cheerful bar with happy hour prices from 5:30 pm to 8 pm daily. Here you can sip £4.50 cocktails and two beers for a fiver. Alas, no cheap deals on food here, but the sharing platters are £15 for 3-4 people if you’re after some substantial bar snacks like mezze or spiced wedges.

Exmouth market is particularly inviting on a balmy summer’s evening, which is nicer for al fresco drinking than its other location Bar Kick on Shoreditch High Street. If the idea of a sports bar fills you with horror, fear not: table football and relaxed Latin American neighbourhood bar are the vibes here rather than huge screens showing major sport events.

Cheapo beers and cut-price cocktails are on offer during happy hour which is 4pm-7pm every day. With bottled of beers at only £2 and cocktails at £5, it’s game faces and happy faces all round. The same deal applies to Bar Kick, which is also fun and friendly and the bigger of the two.

Pretty Hackney local, with a nice garden and drinks deals that can (almost) make you forget about gentrification. Happy hour is 4pm-8pm during the week and extra long from midday to 4 pm at weekends. The liquid rewards are £3 beers, ciders, house wines and spirits and mixers during the week and £3 Bloody Marys on Saturdays and Sundays.

If you’re in looking for a pre-gig drink in Shepherd’s Bush, the Defectors Weld is a busy but decent spot. Their daily happy hour seems to only reward cocktail drinkers, which is odd in a pub rather than a bar, but 2-4-1  from  5pm-7pm Monday to Saturday is not to be sniffed at.

Rum Kitchen deals, as its name suggests, in rum. They also have bars in Brixton and  Carnaby street. Enjoy daiquiris and other fruity rum concoctions for £5 every weekday from 6 pm-8 pm.