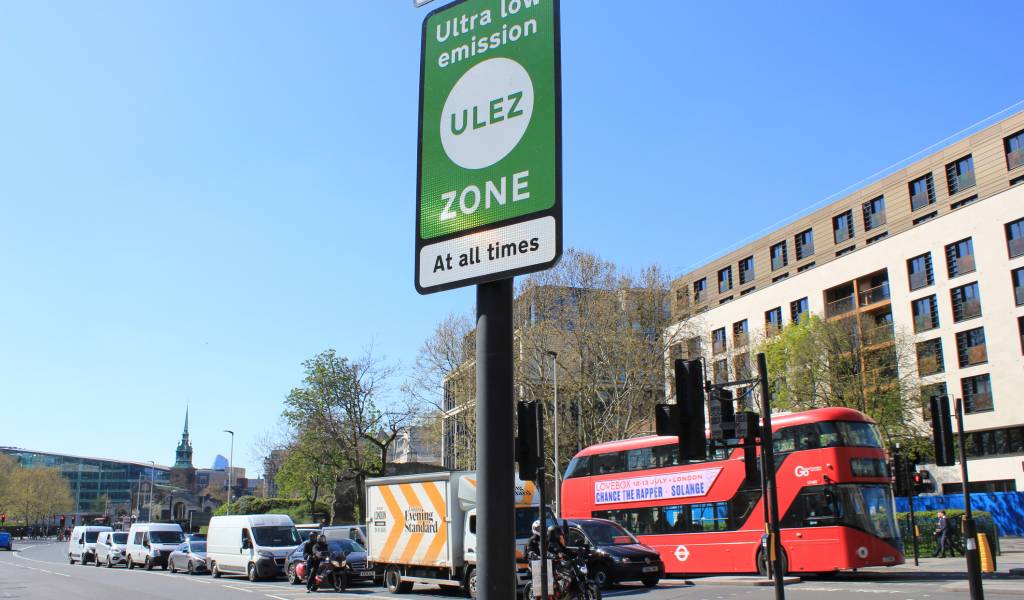 Driving in London isn’t always simple. Whether it’s figuring out where to park, what charges you need to pay, or simply navigating the traffic, there are things to consider in the capital that won’t come up when driving down a country road in the shires. Like ULEZ.

London’s Ultra Low Emission Zone expanded in 2021 and the Mayor talking about a £2.00 daily fee in 2024 for all but the most green of vehicles, many people are scratching their heads over the new wheres and hows. We’ve put together a ULEZ guide for cheapos who are planning to drive in London.

What is the ULEZ?

ULEZ stands for Ultra Low Emission Zone. In brief, it’s an area in London where you have to pay a fee to drive some vehicles. Specifically, the most polluting ones. The ULEZ charge is £12.50 a day. It applies 24 hours a day, every day of the year except Christmas Day.

The ULEZ was originally introduced in 2019 in an attempt to improve London’s air quality by discouraging people from driving vehicles classified as heavy polluters in central London. It’s been quite successful by some metrics: from 2016 to 2020 toxic nitrogen dioxide dropped five times as fast in London as the rest of the UK.

Originally, the Ultra Low Emission Zone covered the same area as the London congestion charge, so the super central area within the London Inner Ring Road, including the City of London and the West End.

In October 2021, the ULEZ expanded to 18 times its original size. It now includes the entire area within the North Circular (A406) and the South Circular (A205), though not those two roads themselves. Pretty easy to remember, but if you’re unsure, TFL have released a guide to the ULEZ boundary by borough.

Another change is that residents are no longer exempt from the ULEZ (they were before the expansion).

How do I know if I’m driving within the ULEZ?

There’s no barrier, but signs were put up at boundaries prior to the 2021 changes. It’s also worth checking a map beforehand as you plan your journey. When planning, Google Maps will let you know if your route is within the Ultra Low Emission Zone, as will many other directions apps.

You can also use this online checker to see whether a postcode is within the Ultra Low Emissions Zone.

Is my vehicle exempt from the ULEZ?

The good news for cheapos: most drivers do not have to pay the ULEZ charge. Stats from the London Assembly claim that 92% of vehicles driving within the zone are ULEZ compliant.

To be exempt, your car must meet the following European exhaust emissions standards at minimum:

The ULEZ is based on the actual emissions from your particular vehicle rather than its age, however the following cars are likely to be exempt:

All electric cars are exempt from ULEZ.

If you’re not sure, you should always check online. Use TFL’s free vehicle checker to see if you have to pay the ULEZ charge. All you need is your number plate.

Are there any other exemptions?

Yes. There are some discounts and exemptions for registered disabled vehicles, historic vehicles, taxis, and a few other special cases. Check the TFL website to be sure.

How does the ULEZ charge work?

If your vehicle is not exempt and you drive within the Ultra Low Emission Zone, you have until midnight on the third day after travel. You can also pay up to 90 days in advance.

It can be a bit of a Cinderella mission because the charging period is midnight to midnight. So, for example, if you drive to somewhere within the zone at 10pm and drive back at 1am you will have to pay for two days.

How to pay the ULEZ charge

You can pay the ULEZ charge online. You will need to know your number plate and the day/s you drove within the Ultra Low Emission Zone.

If you drive in central London frequently it might be worth creating a London road user account and setting up autopay. You can use the same account for other charges such as the congestion charge. Please note that there is a £10.00 annual registration charge per vehicle to do this.

What happens if I don’t pay the ULEZ charge

If you are not exempt from the charge and fail to pay in time (or do a typo when entering your number plate) TFL will send you a Penalty Charge Notice. The penalty charge is usually £160.00, but if you pay within 14 days it is reduced to £80.00.

Don’t be like Cinderella and risk losing one of your shoes (or paying £160.00 quid) – make sure you pay well before the stroke of midnight.