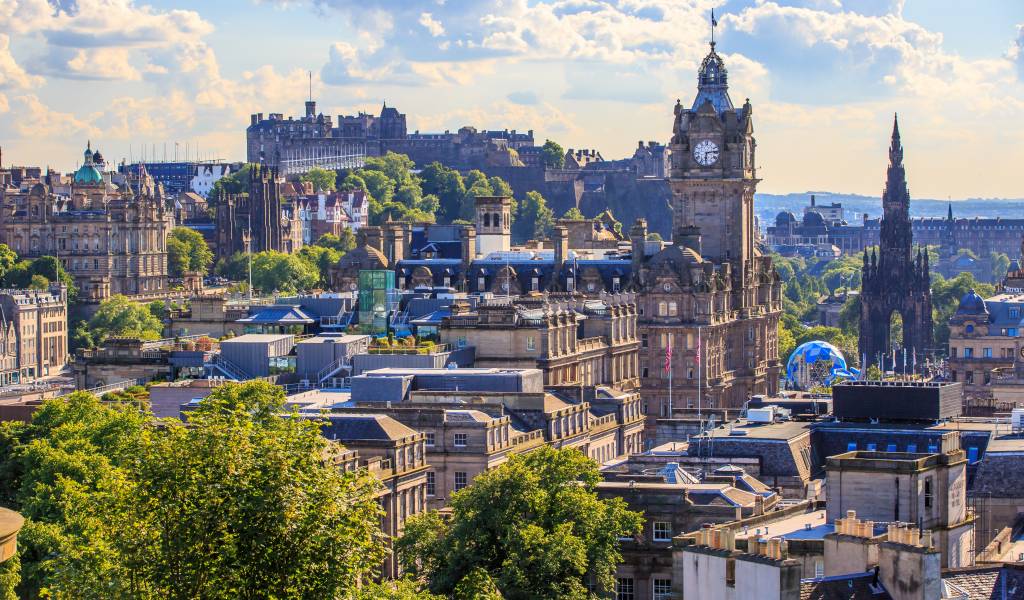 Cheap and Easy Ways to Travel from London to Edinburgh

When planning a trip to Edinburgh, one tip beats them all: buy your tickets in advance for the best prices. That advice stands all year round, but especially ahead of Edinburgh Festival which runs throughout August every year.

With an old town and a new town, winding historic streets and a castle presiding over it, Edinburgh is a beautiful city to visit at any time. It’s much smaller than London, so it’s perfect for a short break, once you’ve sorted your travel that its.

But we’re here to help with that. You can get from London to Edinburgh by road, air or rail.

Flying from London to Edinburgh

It’s worth starting with the fact that short-haul flights aren’t great for the environment. And although the flight time is only an hour, by the time you’ve factored in getting to the airport in London, and into the city at Edinburgh you’re not going to save much time versus catching a train.

But if you do need to fly, budget airlines like Ryan Air and easy Jet fly regularly from Gatwick, Luton and Stansted airports. Just be aware of extra charges like baggage. Carry-on only is your best bet.

Once you land, it takes around 25 minutes to get into the city centre, the cheapest of which is by taking the local bus services, Lothian, which costs £4.50 for a single fare and £7.00 for a return.

Getting to Edinburgh by train

Rail is by far the most direct route of all. Trains go from central London (King’s Cross) to the centre of Edinburgh at Waverley, although you can also get off just before at Haymarket depending on where you’re staying. The journey usually takes 4 hours and 20 minutes and stops at York, Newcastle and Carlisle along the way. Book a window seat if you can, it’s worth it for the views as you cross the English–Scottish border.

We’ve said this one but it bears repeating: buy train tickets well in advance otherwise, it can be prohibitively expensive (up to £250.00), which is why some last-minute and business travellers fly. In general, advance fares are available from 12 weeks before travel. However, in 2016 Virgin Trains announced advanced fare-finding as early as 24 weeks beforehand.

Heading to Edinburgh festival? Keep a lookout for the Virgin Trains spring sale, when cheaper tickets for August travel go on sale, usually in April or May. You’ll need to commit to dates and times to get the best fares, and you’ll be competing with all the various performers but this cheapo has been successful in the past, so go get them.

Use ticketing sites like Trainline and redspottedhanky to check fares and book tickets, as well as fare splitting (buying separate tickets for individual legs of a journey) with sites Raileasy, Split My Fare, Split Your Ticket and Trainsplitting.co.uk.

Otherwise, you can book directly with Virgin Trains and East Coast.

Coaches to Edinburgh from London

Coaches are operated by National Express and Megabus—and both go from Victoria Coach Station with regular services throughout the day. This can be a very cheap way to travel with fares as low as £14.20, but it takes twice as long as the train at around 9 hours, and that’s not anticipating delays, so worth considering if you’re just going up for the weekend.

Taking a road trip to Edinburgh

If you don’t drive, and you’re looking for a more spontaneous road trip without being stuck on a coach then consider a car share option. Drivers and passengers find each other and split the cost of petrol through sites like blahblahcar, GoCarShare, and liftshare.

All the sites have tcs and cs and codes of conduct to check over before your journey, but ridesharing is becoming more popular with people who want to travel cheaply, with a bit of company and reduce their carbon emissions at the same time.