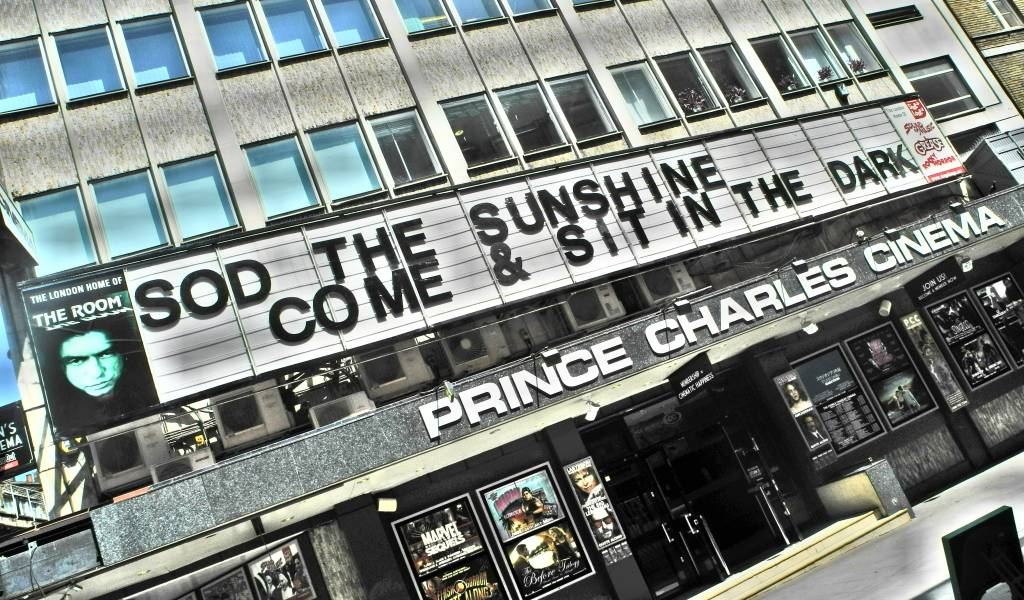 At around £20 a pop for many West End screenings, a trip to the cinema is far from the affordable diversion it once was in London. However, if you are not so bothered about the full-blown uptown experience, yet enjoy the social aspect of movie-going as a night out with friends, the city presents plenty of memorable alternatives.

For locations, see the map that follows the article.

The legendary Prince Charles Cinema is the pick of the bunch if you’re staying central. It’s a two-screener just 50 yards north of Leicester Square with a 300-seat main auditorium screen easily big enough to immerse your entire visual field.

Its diverse programme allows you to catch up on newer films within weeks of their release-by date, both Hollywood and foreign language. Not to mention older titles projected from celluloid rather than digitally, with regular repertory screenings of movies from classic genres and directors.

The venue is also celebrated for its regular audience participation sing-a-long showings of titles such as The Sound of Music, Grease and The Rocky Horror Picture Show.

While not quite the cheapo option it was even ten years ago, ticket prices are still pretty reasonable for Central London—weekday matinees are £8.50, creeping up to £11.50 on weekends and Bank Holidays. However, with a £10.00 (£7.50 conc.) annual membership or £50.00 for a lifetime membership, this falls to £4.50 for matinees and £9.00 for the weekend top whack. You also get access to weekly £1.00 screenings.

Slightly pricier at up to £12.00 a ticket (although matinee screenings are only £1.75 for senior citizens), the Regent Street Cinema, next to the University of Westminster site at the Regent’s Park end of Regent Street, is the only venue to host regular repertory screenings of classic older titles, as well as more recent independent, foreign-language, cult and arthouse titles.

There’s more to the place than just the films though. The venue is famously the birthplace of British cinema, with the very first moving pictures projected using the Lumiere Brothers’ Cinematographe in 1896. Closed for decades, it reopened in form in 2015, the auditorium freshly restored to its Victorian splendour, and it is worth visiting just to have a gander at its opulent interiors.

Sticking centrally, The Horse Hospital near Russell Square is a different prospect altogether. This unique space for London’s “Underground and Avantgarde media since 1993” is literally housed in a former horse hospital. Not all the events it plays host to are directly cinema-related, although film screenings do count amongst its diverse array of talks, book launches, performances and exhibitions. And the annual Miskatonic Institute of Horror Studies lecture series gives a good indication of what’s on offer to those whose film tastes tend in that direction.

More ardent cinephiles are advised to head east to Brick Lane, or more precisely 97 Sclater Street, the home of Close-Up Film Centre. The venue first started as a rental library service, and now boasts a comprehensive catalogue of over 20,000 films and books to which a £10-a-month membership will provide you unlimited access.

In 2015, Close-Up opened its basement cinema with a season of 35 mm screenings of John Cassavetes films. With only 40 seats, it is a pretty cosy venue. The programme does tend towards the more hardball end of arthouse, with a particularly strong focus on experimental film, but Close-Up is run by genuine film lovers for genuine film lovers (the organisation also publishers the Vertigo Magazine).

Plus, its cafe/bar area offers a wonderful communal space for discussion with like-minded folk.

Moving south of the river, another friendly venue that opened around the same time as the Regent Street and Close-Up cinemas is the Deptford Cinema—a stone’s throw away from Deptford Bridge Station. This volunteer-run not-for-profit community initiative offers up an eclectic array of seasons of world cinema, arthouse, animation and cult classics for £5.00 (£3.50 conc.) a ticket.

It is a particularly welcome addition to South London film culture in that it is situated in an area previously devoid of big-screen entertainment.

Staying south, Peckham visitors and locals alike can live out the hipster fantasy of spending £15.00 to watch such familiar titles as Back to the Future or Trainspotting open air on top of the Bussey Building as part of the Rootop Cinema summer season. Or, you can save the effort of walking up the stairs and enough money from the ticket price to grab a few drinks or a bite afterwards by catching a new release at what has to be London’s cheapest multi-screener, the Peckhamplex. To be honest, it is a bit rough and ready, and the programme does tend towards more mainstream releases, but with six screens, there’s room for more highbrow Hollywood titles alongside the perennial kids CG animation and superhero movies.

And with tickets just £4.99 all day and everyday (with a £1.00 surcharge for 3D), there’s usually a vibrant audience to share the fun with, unlike so many of London’s deserted venues. I’ve fond memories of sitting amongst a particularly animated crowd for both Step Up 3D and Piranha 3D. Definitely worth a trip to Peckham for.

Peckham was also the birthplace of South London’s Free Film Festivals initiative, with the first Peckham & Nunhead Free Film Festival in 2010 giving rise to similar events in, among other places, Camberwell, Herne Hill, Streatham, New Cross and now all the way out to Ealing and Guildford. The model is an ingenious one. Put together by community volunteers, hosted in community spaces and aimed at the whole community, essentially anyone can get involved provided that they can find a venue and a suitable film for it and organise the event themselves. And the best part for audiences is that everything is completely free.

Past editions of the Peckham & Nunhead Festival have featured screenings of a Boris Karloff movie at the address he was born on 36 Forest Hill Road (currently Seamasters Fish and Chip Shop), and the documentary Moo Man under the railway arches where Gringa Dairy make artisan cheese. The festival has also held open-air presentations of silent films with live piano accompaniments from Neil Brand on Peckham Rye Common.

Highlight of this year’s Peckham & Nunhead Film Festival, taking place between 5–15 September, include pedal-powered Spider-Man: Into the Spider-Verse in Sidmouth House Green Space and Harold & Maude in Nunhead Cemetary, among others. Streatham offshoot follows shortly after from 15-26 September.

Top of the list of must-go London cinema attractions, however, has to be the Cinema Museum. It’s a magical yet surprisingly little-known venue tucked away between Kennington and Elephant and Castle tube stations, just a 15 minutes’ walk from the British Film Institute—although it might as well exist on another planet.

Housed in the former Lambeth Workhouse where Charlie Chaplin’s mother wound up in 1896, this Aladdin’s Cave of cinema ephemera—from old posters, ushers uniforms, projectors and front-of-house hoardings—is less a film museum per se than a wonderful celebration of cinema’s heyday. A remarkably friendly and unpretentious destination, it plays host to an eclectic selection of events, from lectures and talks from former British movie stars (Robin Askwyth, Barbara Windsor and Martine Beswick have appeared in the past), movie fairs, mini-film festivals and regular screenings from celluloid.

Monday is the cheap day at this beautiful, old Art Deco cinema in East Finchley. The Phoenix is a single-screen cinema, and programming leans towards arthouse, independent and classic old re-runs. Monday tickets are £7.00 all day and on Saturdays, there are kids screenings for just £3.00.

One for cinephiles, the BFI is more Truffaut than Transformer, so don’t turn up hoping for the latest box office smash. However, it is a lovely hangout as well as cinema, even if you’re not a member there are cheap tickets to be found. Tuesday is the cheap day, with selected seats available for £6.00, but they get snapped out quickly so you’ll need to be quick on the draw.

Barbican has two cinemas, one is across the road from the main building, but tickets at both are just £6.00 every Monday.  Bonus for students, who get tickets to any new release for just £5.00 with a valid student card. Unlike a lot of other more indie/rep cinemas, it caters for both mainstream movies as well as arthouse and cult films so there is something for everyone.

A relatively new kid on the block (Walthamstow didn’t have a cinema for years), the Empire is a regular chain multiplex, but peak-time tickets are only £8.00. It is one for getting the full-scale big film experience in the massive Impact Screen—though that will cost a bit more. However, prices drop to £3.95 at all Empire Cinemas on Tuesdays (and £4.95 for the Impact) which is pretty great value.

This cheap, east London independent cinema just got even cheaper. Ok, there has been small (50 p) rise from when Genesis had cheap Mondays and Wednesdays, but now tickets are £5.00 on Mondays, Tuesdays and Wednesdays apart from the two luxury studios which are still only £9.00.

Programming is a mix of box office top 10 and rep screenings and there is a pretty nice café in the foyer.

This post was originally published in August 2017. Last update: August 2019.