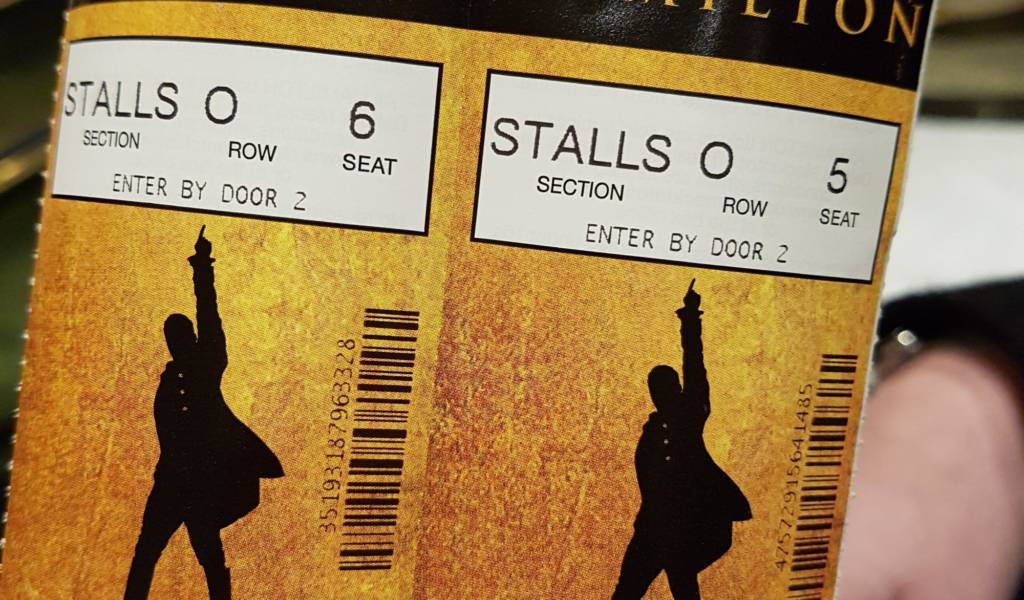 How to Get Cheap Hamilton Tickets in London

So you want to see the biggest show of the decade but you don’t feel like splashing out £200 for Hamilton tickets in London? Of course you don’t. Well just for today, we’re your obedient servants. On your side to make sure you get in and satisfied.

A word of warning

Before you do anything else, it’s worth noting Ticketmaster has exclusive ticketing rights in the UK. So at some point, you’ll need to go through them. Fortunately, there’s no booking fee on the tickets. We very much approve. That makes finding out your options suprisingly easy. Just search availability by price and you’re good to go.

Playing the long game? There’s an online lottery to bag £10.00 seats for every Hamilton performance. Just enter your details or download the app. The theatre will get in touch if you’re successful. There are a few things to note, however.

Number One: You can’t apply for more than two tickets.

Number Three: The lottery opens at 4pm two days before the performance in question and closes at 2pm the day before.

Number Four: You’ll find out if you’re successful through an email sent at approx. 3pm.

Number Five: The lottery for Monday performances starts a little earlier, opening on Friday and closing on Saturday.

Number Six: Being successful in the lottery doesn’t mean you’ve already got your ticket! You have until 6pm the day before the performance (or Saturday, for a Monday performance) to call the box office and claim your ticket. That’s roughly a three-hour window.

Number Seven: Pick up your ticket from the box office by 6pm on the day of the performance.

Number Eight: If you don’t pick your ticket up by 6pm, it might be resold.

Number Nine: You can apply to the lottery online or download an app.

Number Ten: No need for duelling.

If you want to make absolutely sure you’ve got a ticket you can just buy one. Cheap tickets sell out fast, but look far enough into the future and you might get lucky. It’s well worth checking Theatre Monkey first—which will help you work out which cheap seats are worth it. Don’t say we didn’t warn you when you get stuck behind a pillar with no leg room!

For £20.00, there are eight ‘slip’ seats at the edge of the Grand (upper) Circle, four either side. They really are side on but at least they’re at the front of the circle. The seats have an obstructed view (let’s just assume all the seats we’re talking about now have an obstructed view) so there’ll be some bits of the stage you can’t see, but for £20.00 this is brilliant value.

The next ticket level up is £37.50. Cheapo here is relative. You’ve got a few options at this ticket price, all still in the Grand Circle… There are four boxes with two seats each, all priced at £37.50 per seat. Boxes A and C have a slightly better view. The chairs are movable too, which is handy if you need a bit more legroom.

Seats 19 and 20 on rows A to E are £37.50 because the safety rail gets in the way of the view a bit. They’re on either side of an aisle so big tick for legroom but not so much for sitting with friends.

The last four rows of the Grand Circle are all priced at £37.50. That’s because you’re in the gods, but hey, it’s Hamilton. The music reaches all the way back there.

Obviously, these tickets are popular and some of the cheap seats are already snapped up. But if you’re flexible on dates—especially if you can take a Thursday afternoon off to see the weekday matinee—you’ve got a good chance of picking up a bargain.

There’s a good chance Hamilton wil be sticking around for some time. So sign up with your email on the website. If you can wait for it, you’ll hear when the the theatre releases the next batch of tickets. That way you’ll be first in line when cheap tickets go live.

The guys over at Hamilton are doing their best to prevent scalpers selling tickets at inflated prices. Prices reached highs of £8,000.00 (yikes) in the US after writer and star Lin Manuel Miranda announced his departure. As a countermeasure, there are strict ticketing restrictions. Try to get tickets through the wrong channels, and there’s every chance you could be could be turned away on the door with no chance of a refund.

Even if you’ve booked the tickets legitimately or scored won big on the lottery, you’ll need to bring the paperless tickets (received by email 24 hours before the show), the card you paid with and a valid photo ID. Forget to bring them and you could well be throwing away your shot.

Trying to save some serious coin? Here’s how to visit London in a week for under £200.00.

Open with Maps
Written by: Rachel Holdsworth
Filed under: Things to Do
Tags:
Sharing