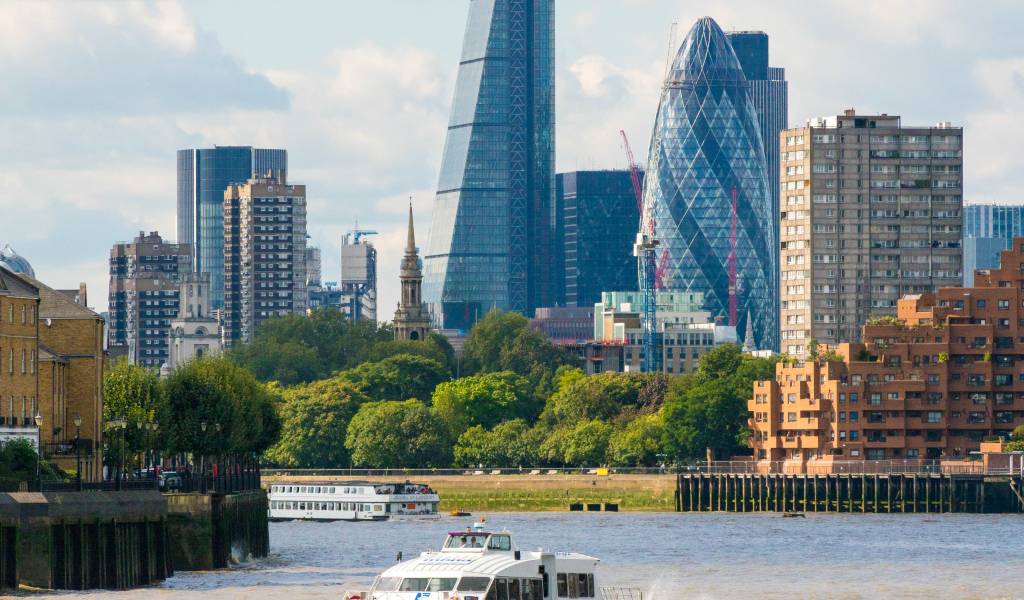 Pic: chas B used under CC

You can live your entire life in London and still only see a fraction of it. Here’s a suggestion for a trip outside of the usual tourist trail that will fill a day of low-cost adventure and exploration in the often-neglected eastern side of the city. The Docklands route takes one both below and above the river and through a range of little-known locales that epitomise the capital’s past and present of grand designs, failed ambitions, hidden treasures and admirable community initiatives, and all for the price of a loaded Oyster card.

You start in Greenwich, one of those areas that is psychologically a lot trickier to get to than it is in reality. A number of bus and train services will take you to Greenwich town centre, in Zone 2, but a directer and more scenic option is to take one of the Thames Clipper boats. They are a lot more affordable than most assume, with a trip from the London Eye, Westminster or Embankment piers costing £6.50, or £5.80 with an Oyster, and half this amount for kids between 5-15. The journey will take around 40-50 minutes, but the view along the river en route is amazing.

There’s a host things to see and do when you are in Greenwich, from the free such as taking a gander at the remarkable Painted Hall in the Old Royal Naval College or a trip to the National Maritime Museum, to ticketed attractions like the Royal Observatory and the pricier Cutty Sark, the world’s only surviving tea clipper.

The low-budget explorer, however, is best appreciating the Cutty Sark from the outside and getting right onto the main trail, which begins but a stone’s throw away, with the dome situated at the edge of the Thames granting access to a long flight of steps (and a lift!) that take you down into the Greenwich foot tunnel. This remarkable feat of engineering, opened in 1902, takes you under the river to the Isle of Dogs on the north side. Step outside again and you are in a completely different world.

You probably won’t want to linger too long at the Island Gardens public park when you emerge back into daylight, but head straight to Mudchute City Farm. This community-run working farm sitting on 32 acres boasts a range of animals, from quails and chickens to horses and alpacas, a wonderful cafe, and a range of events and educational activities for kids and adults like. Mudchute is just one stop on the Docklands Light Railway from Island Gardens, but it is an easy enough walk and clearly signposted, so you might as well go on foot.

Incidentally, for those who need a brief respite from city living, London sports a number of city farms, all of which are free entry and a great place to take the kids. Examples include Vauxhall, Hackney and Surrey Docks, the last of which is again best accessed via the Thames Clipper boat service.

A walk on the riverside: art and architecture

Dominating the skyline against the green pastures of Mudchute is the legendary Canary Wharf development, a bizarre subsection of London that seems to belong to another city entirely. The towering office blocks and overriding atmosphere of economic functionality are more like something you’d find in North America. It is not a long walk from the farm up to Canary Wharf, and the DLR will take you in to the heart of it within a couple of stops, but to be honest, there’s not a lot to do here, so you are better off staying on the train until Westferry or Poplar and changing tracks to head eastwards towards Beckton for the next destination.

The DLR, it should be said, is something of an experience in itself. London’s first driverless metro system opened in 1987, and kids just love sitting at the front as it zooms above the patchwork of unfulfilled promises of post-Olympic urban regeneration that characterises the area. There are isolated pockets of interest in this part of East London, however, including the riverside site of Trinity Buoy Wharf, which bills itself as “Docklands’ Most Exciting Arts Quarter.”

To be honest, Trinity Buoy Wharf is a bit of a hassle to get to. You need to get off the DLR at either East India or Royal Victoria and wend your way through a series of unsightly roadsides, flyovers and underpasses, so be sure to bring a map or a smartphone. Once you get there, however, you’ll find a little oasis of history, culture and tranquility, as well as a stunning vantage point to gaze wistfully out across the river towards the iconic O2 arena.

Amongst the more significant landmarks of this former working dock are London’s only remaining lighthouse built in 1864, the eccentric Container City construction of used shipping containers stacked up to provide affordable workspaces, and a variety of art installations, both temporary and permanent.

Highlights from these include The Faraday Effect, dedicated to Michael Faraday who conducted many experiments at the lighthouse (it is apparently one of London’s smallest museums), and Longplayer, housed in the lighthouse’s former lamp room. This fascinating sound installation uses Tibetan prayer bowls to create an evolving soundscape designed to play for over 1000 years without repeating itself. It is slightly odd perhaps then that you can only experience the world’s longest musical compositions live on weekends, as the lighthouse is closed during weekdays—although you can hear its hypnotic patterns unfold over the internet by clicking here. Trinity Buoy Wharf also boasts two eateries in the form of the 1940s Americana of Fatboys Diner and the wonderfully cosy Bow Creek Cafe, which does a great fry-up at a reasonable price.

Walking back east to Royal Victoria will put you at the foot of the grandiosely named Emirates Air Line, the infamous cable car that opened for the 2012 Olympics and has been courted criticism as something of a white elephant due to the rather limited number of passengers who use it habitually. The main problem is that for most, there’s little reason to make the crossing from the south side next to the O2 stadium to this near desolate northern bank of the Thames. The area around the nearby Royal Victoria and Custom House DLR stops is largely just a cluster of hotels and luxury investment properties, although it does boast the ExCel London exhibition centre, a variety of waste recycling centres and a couple of overpriced restaurants that give some indication as to how London operates as a city.

From here you can walk or DLR it to a number of diversions, including another city farm at Newham, London City Airport, the Thames Barrier (among the world’s biggest movable flood barriers) and, if you suffer vertigo, you can head back south under the river via the Woolwich foot tunnel, which opened in 1912, a decade after the Greenwich one.

The most salient architectural feature here is the Crystal, a permanent exhibition site dedicated to ideas about sustainable future city living and design, built and operated by Siemens. It is actually a pretty interesting place, with films and interactive exhibits that will keep children amused for a couple of hours and give adults plenty to think about. For the first couple of years following its opening for the Olympics, entry was free, although this ironically in itself has proven unsustainable, and it now costs £8 (£5 concs) to visit, although under-18s get in free if accompanied by an adult. The cafe offers nice views and is reasonable priced though, if you are getting a bit peckish at this point.

The final leg of the circuit gives you the opportunity to cast back your gaze over the path you have taken from the lofty vantage point of the cable car. It is truly amazing that more people don’t visit this as a destination in its own right, as it offers a better vista, albeit over a rather different part of the city, than the pricey London Eye. A trip across the river costs just £4.50 (£2.30 for children), with a pound discount for Oyster users, although somewhat strangely, you can’t get a return ticket—if you are in it just for the ride, you have to go out of the exit barriers at the other end and pay again to come back. Another peculiarity are the video screens in each of the cars that tell you what you’re meant to be looking at, distracting you from the spectacular views actually outside the window.

The cable car will set you down on the Greenwich peninsula right next to the Millennium Dome, itself seen as rather a folly until its redevelopment and reopening as the O2 Arena in 2007. Even if you are not going to see a concert there, you can wander inside the dome, although its depressing parade of soulless chain restaurants and bars has something of the air of the airport departure lounge about it, as indeed does the entire new development of this south-side area, presenting a rather insipid though more probable vision of the future of urban living than the idealism on display at The Crystal.

There’s no real reason to dwell here, and with the conclusion of this odyssey across the London’s eastern hinterlands, it is time to head home, either via the Jubilee tube line from North Greenwich station (actually quite a trek by foot from your starting point at Greenwich) or again on the Thames Clipper back into central London.