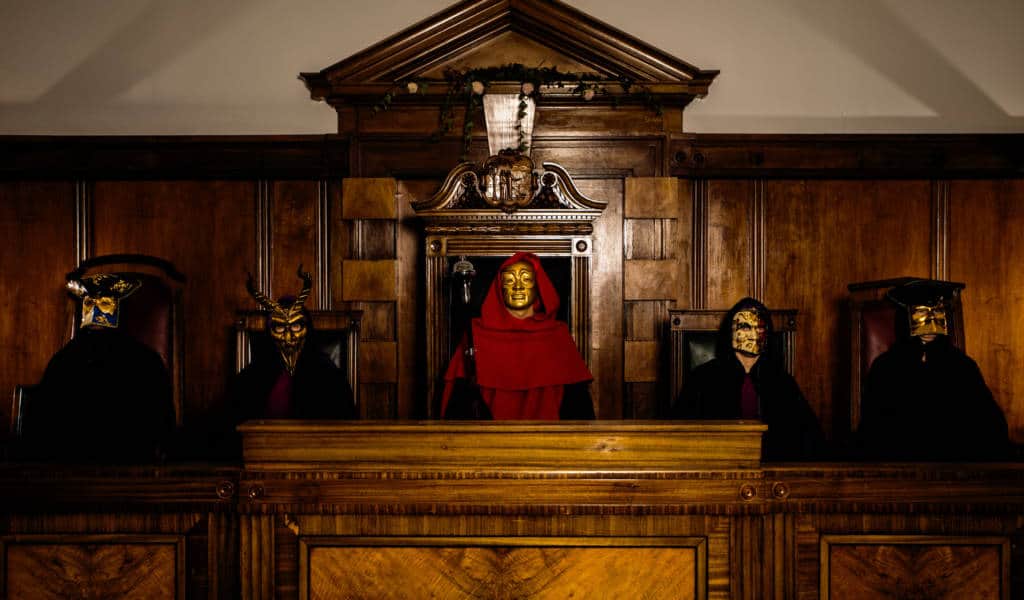 A new year means new pop-ups will be rolling into London. Read on for sketchy burlesque, immersive shows, mystery games and bars. Looking for more permanent secret bars and hideaways? Check out our guide to hidden London.

You’re cordially invited to an immersive, masquerade murder mystery. The show is opening in London following a sold-out run in Hong-Kong. Entrance is via a secret password, which you’ll get once you’ve booked a ticket. Once inside, don your mask and get ready to become part of the unfolding story.

The Invitation is a cloaked and clandestine affair. So expect masked actors to interact with you as you search for clues in hidden rooms. It’s been hailed as ‘Eyes Wide Shut meets SE7EN’, where you get to dress up and crack clues inside a beautiful, old east London venue.

Immer City are putting a winter chill down your spine once more. Their hit pop-up Dead Quiet returns to Kensington Central Library for its third year. Fans of spy fiction and murder mysteries will get their crime-loving kicks by cracking this Cold War case.

Teams of five or six play the game. But your host, supernatural sleuth Jack Daw will put pairs and smaller groups together to solve the mystery of the dead man in the archives. Can you uncover the dark secrets hidden within the library walls?

Unlike a lot of immersive pop-ups, the audience makes the first move on any interactions. And you’ll get to interrogate suspects as you make your way around the historic building. What’s more, there’s free tea and coffee during the interval. That should get your best detective theories to percolating.

Kick off a roaring 2020 with a visit to the Jazz Age. Gin House Burlesque returns for a new year and a shimmering decade of prohibition-era high jinks. Burlesque performers Miss Betsey Rose, Jolie Papillon and Missy Fatale bring their vintage cabaret back to the The King’s Head Members Club in Hoxton. Snake charmers, musicians, fire eaters and magicians will also be there to join in the fun.

Gin House Burlesque shows are a monthly soiree from February. A dilapidated door is a gateway to four floors of speakeasy, gin soaked dancing and decadence. Bars will be well-stocked, naturally, but the venue doesn’t serve food so it’s worth a cheap and quick dinner in nearby Dalston or Shoreditch first.

The show comes with a warning thanks to the live snakes and fair bit of taxidermy. But if you’re unphased, grab your gladdest of vintage rags and your dancing shoes, and shimmy on down to the Kingsland Road.

Dr Sketchy is an ‘anti-art school’ started by artist, author and former artist’s model Molly Crabapple in Brooklyn in 2005. The group has been hosting alternative life drawing pop-ups since 2007. In 2020, organiser Claire Marie and your host Dusty Limits invite you to experience “what art classes would be if the class was let loose in the Moulin Rouge”. Unlike the Moulin Rouge, entrance doesn’t cost a small fortune, you’ll just have to part with a tenner to enter this joint. They even provide the drawing materials.

All skill levels are welcome to come down to the Toulouse Lautrec for sketching and live cabaret and burlesque performance. You can hit up the canvas in the afternoon, or come later on for some night-time shading and sketching.

Set during the time of the Peaky Blinders, fans of the TV show can dive into the murky world of 1920s London mob wars in Crooks 1926. So don your peaked cap and 20s threads and get drawn into the territorial tussle between the UK’s most formidable criminal families.

It’s run by immersive production veterans COLAB theatre, the team behind other hit pop-ups like Spy City and Silence. There isn’t much information available about how exactly to play, but you’ll be leading your own experience. You’ll navigate alliances, duck into underground boxing matches and deal with the likes of The Cortesi Brothers.

There’ll be preview shows from 18-31 January available at a reduced price. It’s also a chance to pass on your feedback to help shape the final show… If you dare.