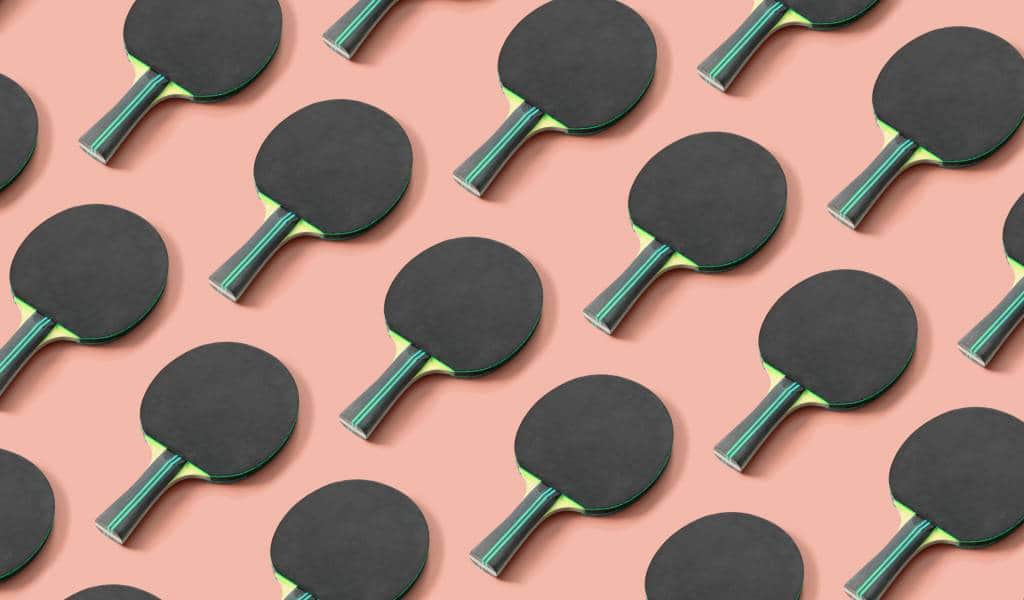 Play table tennis in London with our guide to the best ping pong bars and outdoor tables in the capital. What’s not to love about this metronomic sport that scientists have shown sharpens the mind, protects against brain degeneration and fosters good mental health? We’ve spent hundreds of hours letting loose our fair share of ferocious forehand spin, bewildering backhand slice and thoroughly uncouth backchat to friends, enemies and lovers. And now we want to share with you the best ping pong bars and outdoor table tennis tables in London so you can do the same.

Bounce, Farringdon is the ultimate social ping pong club in London. It claims–on good authority–to be the home of table tennis. The venue is located on the actual site where ‘ping pong’ was first created and patented in 1901. Boasting 17 tables, including an official table from the 2012 London Olympics, the huge basement space is especially geared towards large groups and parties. Beer, wine and cocktails flow freely. As do an ocean of white balls, which staff collect with nets to refill buckets beside each table. This fact alone warrants the £6.00 per person, per hour peak and £4.00 per person, per hour off-peak charge. The ball collectors save so much time scrambling around on the floor searching for your ball between rallies. Check out the futuristic ‘Wonderball’ experience, which uses projection mapping to turn the table into an augmented reality computer game.

The Doodle Bar started life as a pop-up in Battersea before moving to a rustic railway arch in Bermondsey. The premise is simple: it’s a relaxed environment to enjoy a craft beer or cocktail with friends where you can draw doodles (or whatever you fancy) on chalkboard walls and play ping pong for free on one of the tables in the narrow room at the back.

The Miller pub in London Bridge serves a splendid selection of local craft beer and ale alongside gourmet chicken, beef, vegetarian and vegan burgers. It’s a great place to fuel up on guilty pleasures before heading up to the raised wooden patio for a session of topspin fun on their free ping pong table.

There are tons of places to play ping pong in London outdoors. Just rock up with your bats, balls and arrogant demeanour for a session of table tennis fun. This is undoubtedly the cheapest option. Once you’ve made the initial investment in equipment–which can be made for as little as £5.00, you can play as much as you like.

Fairly well sheltered from the wind, and close to a water fountain and public toilet, the two Whittington Park table tennis tables are a great shout.

Local skill level: 5/5 – some of the regulars play with unnerving accuracy even when slight crosswinds come into play. They’ll have no qualms demoralising you with the widest deficit they’re capable of.

Situated near the bowls club and tennis courts, the Hampstead Heath table is curious in that it is a T3 ping pong table. Circular in shape, with each side split into thirds, T3 is designed for three-on-three action.

A lovely little secluded park in the shadow of Brixton’s historic windmill. Very spacious, but the singular table is susceptible to wind on occasion.

Local skill level: 2/5 – more often than not, the other players are youngsters not much taller than the table itself.

Located beside the tennis courts near the Camberwell Road entrance. The two ping pong tables in Burgess Park are brilliant fun, especially on those balmy summer days and evenings when the park really comes to life.

Local skill level: 4/5 – this is one of the best places to strike up a match against a challenger. No matter their age, some of the regulars at this table are highly skilled and show great technique (often imported from the nearby tennis courts).

Just off Granary Square, within Central St Martins. There are three public ping pong tables that benefit from something very rare: a roof! With acres of space and no gales, you can really get stuck into a rally on these tables.

There are two tables located in Soho Square and Golden Square. The squares are often filled with picnickers and those meeting up to hang out after work, which gives the illusion of playing in front of an adoring crowd. The key word here is ‘illusion.’

Local skill level: 4/5 – due to the prized central location close to dozens of creative agencies (where workers famously devote all of their time to perfecting their ping pong skills) both Soho Square and Golden Square feature some very good players.

Next to Brockwell Lido, and its Thorpe Parke-esque queues, on the Tarmac area you’ll find a singular ping pong table with oodles of space around it.

Local skill level: 3/5 – from the woeful to the wonderful.

Situated near the tennis courts, there are a couple of tables on Clapham Common. Sadly, they are seriously afflicted by crosswinds on all but the calmest of days.

Local skill level: ?/5 – who knows with these winds?

Find a table near you

To check if there is a table near you, just enter your postcode at Ping England and have a browse.

Even if the map doesn’t show any hyperlocal tables, it’s worth exploring nearby small parks and housing estate communal areas. Try walking a different route home. You may well discover an outdoor table tennis table nestled among the swings and roundabouts.

Looking for a adventurous outdoor activities? We’ve got you covered!