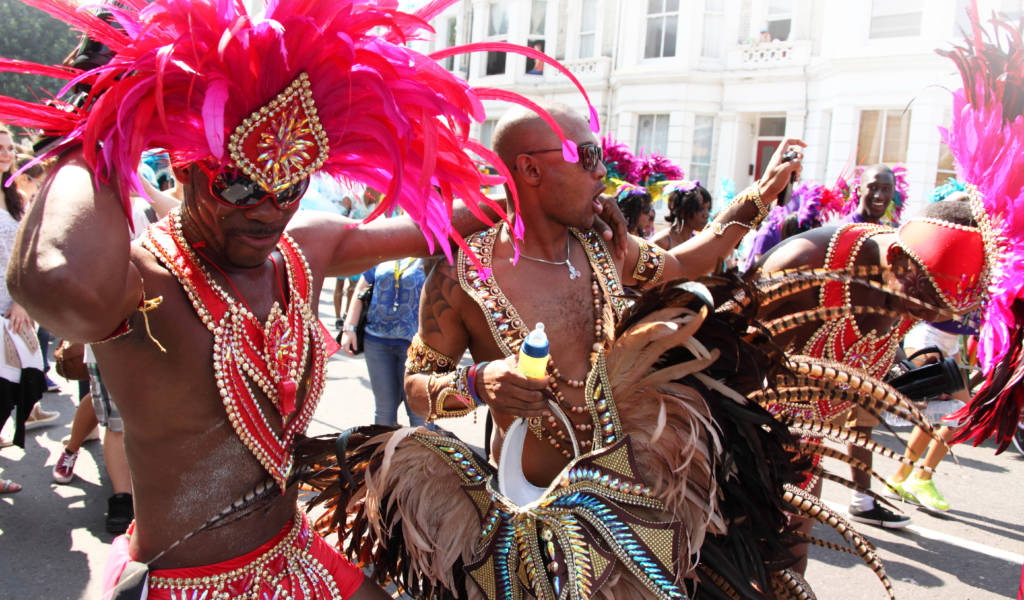 Visiting Notting Hill Carnival? Here's Everything You Need to Know

In London for the August bank holiday? Or maybe you’re a Londoner yet to go Notting Hill Carnival. Either way, our guide has you covered. With an estimated crowd of 2 million people, plus 40, 000 volunteers and 9,000 police, Carnival retains its feathered crown as the biggest street party in Europe. In fact, in scale it’s second only to Rio de Janeiro in the world.

The main carnival is free and you don’t need to buy tickets. However you’ll need to pay if you plan to go to an after party (see below).

What is the Carnival route?

You can also download the app for the most up to date info, including the locations of toilets, first aid stations, venues and follow the live locations of parading bands.

The parade will kick off a 9:30 am on both Sunday and Monday, while judging starts at 6:30 pm. Notting Hill Carnival ends at 7 pm with a strict noise curfew (it is a residential area, after all). From then it’s up to you whether to go home or carry on to one of the after parties—more on those later!

How to get to Notting Hill Carnival

By now this should be fairly obvious, but it’s going to be very, very busy. How you get there depends where you’re coming from, but in any case, make sure you plan ahead and check TFL (Transport for London) for regular updates.

Some local stations may be closed or exit only for crowd control, and buses will be diverted.

Notting Hill Gate: Exit only, 11 am-7 pm both Sunday and Monday. District and Circle line trains will not be stopping at the station.

Royal Oak: Exit only after 11am Sunday and Monday, and closes at 6pm on both days.

Westbourne Park: Exit only from 11am-6pm Sunday and Monday, closing at 11:30 pm both days.

Queen’s Park, Shepherd’s Bush, Holland Park, High Street Kensington, Bayswater and Paddington will be open—but may be busier than usual.

It’s also worth noting that if a station is too crowded, you might not be able to touch out on your Oyster card or contactless—but your fare should be auto-corrected after, you can claim a refund if not.

For more travel information and a map with local stations check the TFL website.

Please allow extra time if you’re planning on bussing to the carnival – there’s a 48 hour bus driver strike planned for the Notting Hill Carnival weekend. Transport for London (TfL) says 10% of its bus network will be affected so check the bus route status before you leave.

Can I take kids to the festival?

Absolutely, though you’re best off going on Sunday, which is considered the ‘Notting Hill Carnival Family Day’. You’ll still need to expect massive crowds and a whole lot of noise, but it’ll be much safer and more kid-friendly than Monday. Head down as early as possible to find a decent spot.

Bring all the usual stuff you need for a day with the kids—water, sunblock snacks, etc. Plus travel potties for tiny ones are advised to avoid painful portaloo queues, and ear defenders as the drums and sound systems are very loud.

What can I bring to Carnival?

Avoid large backpacks, they get in the way and unfortunately make for a pick-pocketing risk. Be as hands-free as you can, money and phones in pockets or money belts, small bags etc. Take plenty of cash, apart from the refreshments you’ll want to buy—you may need to barter with a friendly local for the use of their bathroom as portaloo queues can take a long time. You can bring your own food and drinks—just no glass!

What should I wear to Notting Hill Carnival?

You can leave the spangly carnival costumes to the parade or ‘Mas bands’ (as in masquerade). But consider glitter, face paint, colourful clothes, whistles and footwear that you don’t mind getting beer spilt on. Breathable fabrics are always a bonus—it’s going to be a sweaty time all round.

Where are after parties happening?

The party vibes continue both in west London and beyond. The official Carnival after-party kicks off from 10 pm at Ministry of Sound in Elephant & Castle and goes till 6 am! If you’re not a 24-hour party person, there a number of smaller events around town.

The streets of the west London borough of Kensington and Chelsea have been hosting an annual street festival since 1966 when it was known as The Notting Hill Street Festival, founded by local activist Rhuane Laslett-O’Brien, to promote cultural diversity in the area. The event evolved into Notting Hill Carnival and has been led by the British West Indian community since 1976. It’s always on during the August bank holiday weekend (Sunday and Monday—August 27-29, 2022), with a massive parade, live music including reggae, dub and salsa, as well as 37 static sound systems and steel bands. Plus lots of Caribbean food, hot and cold drinks, rum and beer.

Anything else to know?

With that many people, meeting points and mobile signal can become redundant, so go with a small group of friends and stick together! No carnival comrade gets left behind!