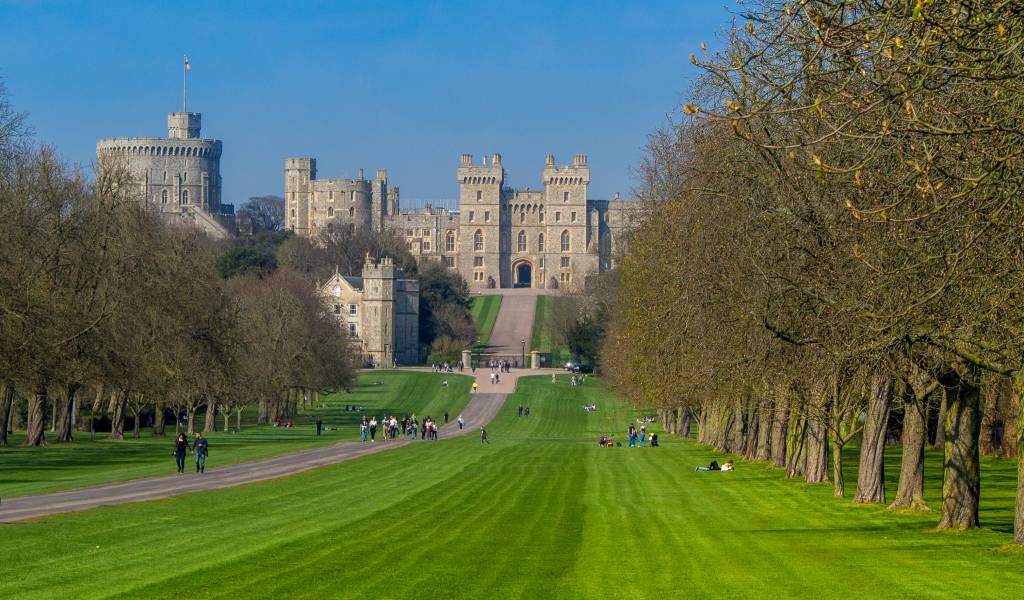 Just under an hour’s train ride from London takes you to Windsor, a historic town by the River Thames that is home to the world’s oldest occupied castle, cobbled streets, beautiful parks, independent shops and some strange sights. Although it’s a relatively small town, it’s a year-round hit with tourists and London daytrippers alike, perfect for some riverside strolling, country walks, and leisurely pub times.

Getting to Windsor from London

The quickest way to get to Windsor is by train.

The fastest route is to get a train from Paddington to Slough, which takes approximately 15 minutes on a fast train (£11.10 off-peak day return). Then change for Windsor and Eton Central, which takes 6 minutes (£4 for an anytime day return).

If you prefer a more direct route, take the train from Waterloo to Windsor and Eton Riverside which takes around 55 minutes (£13.40 off-peak day return).

Things to do in Windsor

Windsor’s main tourist attraction is Windsor Castle, the oldest and largest occupied castle in the world. It’s also one of the Queen’s favourite residences; the Royal Standard flag flies above when she’s home. It was founded in the 11th century by William the Conqueror, built high above the river and was restored after a fire in 1992.

These days you can take a wander through the state apartments, semi-state rooms, the castle precincts (outdoor bits, the moat roam, St George’s chapel and Queen Mary’s Dollhouse. For a bit of pageantry, visit on a Thursday or Saturday for the Changing of the Guard where groups of guards go on a sort of parade through the castle grounds. The Household Troops march into the street too.

Standard adult tickets cost £23.50 and can be purchased online.

Once you’re done snooping around the Queen’s gaff, get away from crowds and into nature on The Long Walk in Windsor Great Park, which is filled with roaming deer. You can wander to 2.64 mile chestnut-tree-lined avenue from the castle. Keep going uphill to The Copper Horse,a nice lookout point over the Berkshire countryside from which you can see London in the hazy distance.

The Crooked House of Windsor

Right by Windsor Castle, there’s another lesser-known historic landmark, the wonderfully wonky Crooked House. Right by there, you’ll also find the shortest street in England: Queen Charlotte Street, which is just under 52 feet long and leads to The Carpenters Arms, if you’re after a pit stop and some pub grub.

The Crooked House of Windsor

Windsor is also thought to be home to the UK’s only pavement clock. Take a walk along Thames Street and head for the Pizza Express and look down to see the clock embedded into the pavement, originally installed in 1950 by clockmaker’s Dyson and Sons. It was replaced in 2011 with a time capsule hidden underneath.

One of the strangest tourist attractions along the Thames is Duck Tours. The London edition is permanently shut, but this bizarre tradition lives on along the merry waterways of Windsor. Duck Tours are billed (not sorry!) as “unique amphibious vehicles”—big, bright yellow bus-boat hybrids that can transport passengers in the river and on dry land to see the sights.

Take a walk away from the castle and the bustle of upper Peascod Street and you’ll find more interesting, independent places to explore. St Leonard’s Road is also home to The Old Court arts centre, which sits within an Edwardian fire station, a magistrates’ court, and a police station, which regularly hosts stand-up comedy, fringe theatre, live music, family events and exhibitions.

If you take the Paddington -> Windsor (via Slough) route, you’ll arrive at The Old Station, a grade II listed Victorian Railway Station that is now a large shopping and food and drink/market area. It’s a bit like Windsor’s answer to Covent Garden, with a mix of chain eateries, like Bill’s and Patisserie Valerie, and luxe shops, like Molton Brown and Le Creuset. But there are smaller, independent places in and around it too. For less hectic, touristy trap options, take the side steps down to Goswell Hill for excellent Italian food at Sebastian’s.

Cross the bridge from Windsor over to Eton for a leisurely lunch at Gilbey’s, which serves up modern British food with a French twist, and a decent value set menu at lunch and early evening (£23 for two courses).

But if pub grub rather than bistro is more your thing, then enjoy lunch or dinner with a lovely Thameside view at The Boatman. And for an afternoon caffeine fix or a slice cake, visit Lilly’s on Peascod Street or Nimia on Eton High Street.

And finally, stick around see a show at the Theatre Royal, which reopened post-lockdown with a performance of Hamlet, starring Sir Ian McKellan.