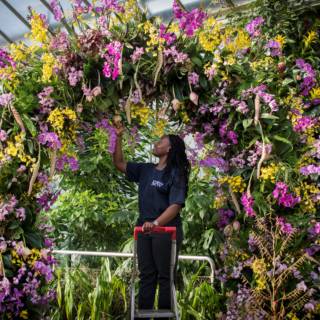 Now in its 25th year, Kew Orchid Festival is an annual event at the Princess of Wales Conservatory in Kew Gardens . People come from all over to see some of the world’s most beautiful orchids. This year’s event takes place February 8th–March 10th.

What’s on at Kew Orchid Festival 2020

This year’s festival is dedicated to the wildlife and culture of Indonesia. Displays are inspired by the country’s biodiversity, and will highlight Kew’s work to protect it. Indonesia is an archipelago of more than 17,000 islands, including Java, Borneo, Bali and Papua–some of the world’s most unique and diverse ecosystems. So visitors can expect to be transported to exotic places via their senses at the festival.

The show includes life-sized animals including orangutans, tigers and rhinos. All decorated with hundreds of tropical flowers. Indonesia has over 100 active volcanoes, inspiring an elaborate pond display of an erupting volcano made up of orchids. Inspired to kit out your own place with flowers? Check our guide to Columbia Road Flower Market

Entrance to the festival itself is free, but you’ll need to pay for entrance to the gardens. Tickets are cheaper online. Adult tickets cost £12.50, young person (16-34) tickets are £5.45 and child (4-15) tickets are £3.50. There are further discounts and concessions for families (2 adults, 2 children £30.00), Seniors (over 65) pay £11.00 and carers go free. What’s more, If tou’re lucky enough to live nearby you’ll get tickets for £10.00. Remember to book a timed entry slot for the Orchid Festival when you purchase your entrance to Kew Gardens.

It’s worth making a day of it. Kew Gardens is actually the largest botanic gardens in the world, so there’s plenty more to explore aside from the Orchid Festival.

Getting to Kew Orchid Festival

Kew Gardens is in Zone 3, and easily accessible by London Underground, Overground and Train. The station is served by the District Line (Richmond branch) and London Overground) and is the closest station.

Kew Bridge station is slightly further, but still pretty close (800m). Trains run there from Waterloo via Vauxhall and Clapham Junction, however it does not have step free/lift access. Richmond has both, but you’ll need to take the 65 bus (direction of Ealing Broadway) to Lion or Victoria Gate.