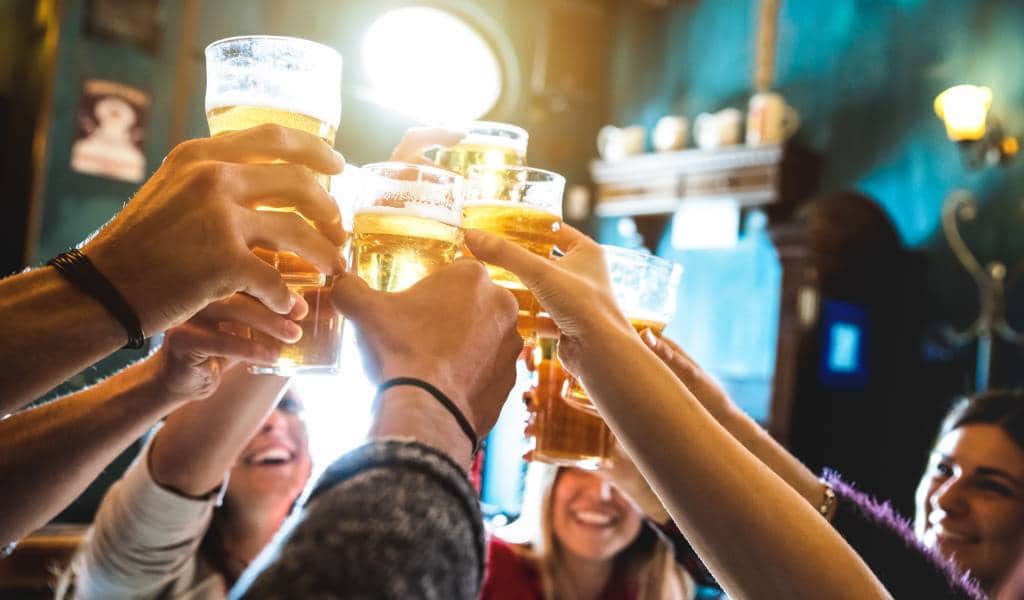 A Guide to London Nightlife

Late-night antics at Soho bars, Shoreditch clubs, pubs and gigs in Camden and beyond—the capital has lots on offer at night, whatever your taste, speed and budget. Here’s your London nightlife guide to free, cheap and fun things to do after dark.

London bars, much like clubs, have evolved to incorporate every theme and niche you could desire. We’ve broken it down to help you pick the ice cool, the late opening, the sporty and the secret.

Londoners love to head for the rooftops, particularly during the warmer months. Some, like Queen of Hoxton and Skylight at Tobacco Dock, have a winter season too, and you can even ice skate at the latter. One of the biggest and busiest is Frank’s Café, in Peckham, which occupies the top of a disused car park. Over by the Southbank, you can sip cocktails at Bar Elba or surrounded by greenery and wildflowers on the Queen Elizabeth Hall Rooftop.

Camden has its fair share of late license pubs and bars. The Blues Kitchen is a late and loud music bar with Cajun food and live music. It’s open until 2:30 am on Fridays, and 3 am on Saturdays. Farther up Camden High Street, The Lock Tavern also has a live room, a small roof terrace and stays open until 1am on Friday and Saturday nights.

If you’re looking for more of an old boozer rather than a bar, wander up to Monarchy on Chalk Farm Road. It’s a big pub with a friendly crowd, gigs and the odd club night. It’s open until 2:30 am on Fridays and Saturdays.

Shoreditch, Hackney, Islington and Soho are also good areas for late-night liquid refreshment. If you’re over in Shoreditch, there’s always fun stuff to check out after midnight at The Book Club or Queen of Hoxton.

These days it’s hard to walk past a drinking establishment that isn’t showing a major sporting event on a big TV. But, if you want a sporty atmosphere at all times, then it’s an easy goal to achieve in London. Neighbourhood pub The Faltering Fullback in Finsbury Park is all about rugby, especially in the main bar and large beer hall at the back. For live football (and table football), head to Bar Kick in Shoreditch.

If you’re looking for a cosy place to impress a date, or somewhere to enjoy a leisurely nightcap, check out these hidden gems. One of the most hidden is The Vault, in Soho, which is concealed behind a bookcase in Milroy’s, London’s oldest whisky shop. For a touch of Czech 60s kitsch, visit Lounge Bohemia, which is hidden beneath a kebab shop close to Old Street, and you have to ring ahead to get in. And for velvet-clad, cocktail lounge vibes, visit The Mulwray at The Blue Posts in Chinatown.

There’s no shortage of regular club nights all over town. From sweaty warehouses to basement dives, there’s a night on for every club style and musical genre you could desire.

One of London’s biggest and most legendary clubs is Fabric. It was saved from closure in 2017. The huge cavernous Farringdon club has three spaces playing drum & bass, dubstep, house and techno from 11 pm until the sun comes up.

If indie, rock and alternative nights are more your scene, then head to Camden or Islington. Regular clubs include Propaganda at Dingwalls, White Heat at The Lexington, and Not Another Indie Disco at the O2 Academy Islington.

It’s not just students that appreciate a wallet-friendly night out. But there are plenty of places to go that offer discounts to students, particularly on weeknights. Sneak at XOYO in Shoreditch is a massive student night. It’s on every Tuesday playing house/techno/hip hop and R&B. Admission is £8–10 (purchased in advance), and drinks start from £3.

Soho is one of London’s most nocturnal neighbourhoods. It may now be awash with fancy cocktail bars, but it’s also home to The Roxy, a student-friendly basement bar with club nights on throughout the week including indie, pop and R&B.

Finsbury Park Station might not be the obvious destination for a night out. But right opposite is Rowans, a late-opening American-style bowling alley, where you can bowl for £7.30. It’s not just about cheap 10-pin bowling though. Rowan’s also has pool, karaoke, licensed bars and retro club nights (70s, 80s & 90s) at weekends.

If you prefer old pubs, with open fires, frosted glass, and occasionally migraine-inducing carpet patterns to fancy bars, you’re in luck. London’s full of them. You don’t have to pay a premium for a roast dinner at a gastro pub, check out these more traditional boozers instead.

Historic and infamous pubs in London

Fancy a relaxing, riverside pint in the same place where King Charles II met his lover Nell Gwynn? Head to the cosy, atmospheric The Dove, in Hammersmith. Take a notebook too—Graham Greene, Ernest Hemingway, and Dylan Thomas are all former patrons, so you might be inspired to scribble down some beery musings.

Over in East London, take a trip to Prospect of Whitby, in Wapping, for pints of grog where pirates used to drink. There is also a rather macabre noose outside as a nod to the notorious Hanging Judge Jeffries, who used to knock back pints there in the 17th century.

Peep down a side alley just off Fleet Street to visit Ye Olde Cheshire Cheese, which was restored after The Great Fire of London in 1666, and was one of Charles Dickens’ many drinking dens.

Ok, so most of London’s historic pubs are indeed the oldest too. Fortunately, most of them have escaped gentrification and have retained their character. The title of oldest pub is someone contested, and several pubs claim that title. However, Ye Olde Mitre off Chancery Lane is old enough that Elizabeth I was alleged to have danced with royal favourite Sir Christopher Hatton. Close by is The Seven Stars, which opened in 1602, is one of the smallest pubs in the city and a favourite among legal professionals. Clerkenwell pub The Jerusalem Tavern has occupied different sites since 14th century, and it’s been in its present spot since 1720, and you can read more about its history on the pub wall.

If you’re new to town and looking for new drinking buddies, join a pub crawl in London. But if you prefer to check things out at your own pace, there are plenty of other pub crawls. It’s probably easiest to pick an area and go from there. Camden, Soho, Shoreditch and Islington are all great for pub crawls.

More elaborately themed pub crawls attempted by Londoners include visiting 26 pubs off the Monopoly board that kicks off at The Lord Nelson, in Elephant and Castle, and ends up at Spread Eagle, just off Oxford Street. There is also The Circle Line pub crawl, which is good for a sunny day.

London’s queer scene has had a lot of closure due to gentrification over the past decade. But there are still lots of LGBTQI+ venues and regular nights all over the city from Soho to the east end.

The arches under Charing Cross Station is home to Heaven, which has been a famous gay club since 1979 and hosts the G-A-Y club night every Saturday.

Over in East London, The Glory in Haggerston hosts basement discos at the weekend, as well as drag and cabaret events. Up the road in Dalston, Dalston Superstore hosts midweek and weekend parties.

Music venues have also struggled against London redevelopment. But there’s somewhere to go to a gig every night of the week if live music is your jam.

Soho, Brixton, Shoreditch, Camden, Hackney are all great areas for gigs, from big venues to tiny clubs. Soho is home to two of London’s most legendary venues including jazz venue Ronnie Scott’s and The 100 Club.

Brixton is home to O2 Academy Brixton, but there are also smaller, interesting shows on at the Windmill Brixton too.