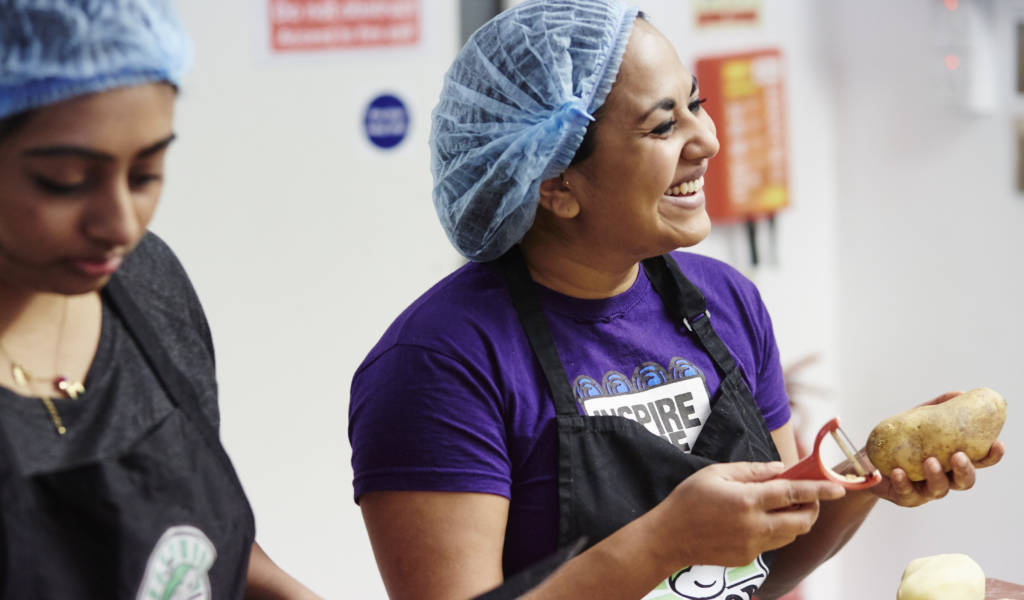 Finding connections in a city the size of London can be tough. With a population of over 8 million, it doesn’t feel like we’re alone much. We’re constantly accidentally (usually) elbowing each other as we tussle for space on the underground. We’reanging out in busy pubs and restaurants, and seeing the same people every day at work. But occupying the same space as lots of people isn’t the same as interacting with them. And according to studies including Time Out’s City Index Survey, London can be a pretty lonely place to be. Loneliness among older people has been well documented for a long time. That’s where these London community projects come in.

Why London can be a lonely city

There are lots of factors contributing to a sense of loneliness in the city. Unemployment is a big factor, and around 29% of Londoners say they’ve met most their current friends through work. Being new to London can be challenging and overwhelming too. Even more so if you’re living alone or renting a place with no real communal areas. Others stay home a lot because of home-working, child care, caring responsibilities and health reasons. Its a recurring theme on the r/London reddit too, which is a community with over 220,000 people.

Loneliness is a public health concern, not just in London but across the UK. And rightly so—research suggests loneliness can negatively impact mental and physical health. Ot can be as bad for you as smoking 15 cigarettes a day (Campaign to End Loneliness, 2016).

City-wide projects and groups in London

While the stats seem bleak, the outlook doesn’t have to be. More and more groups are taking positive action, bringing Londoners together across different generations and backgrounds.

From local borough councils and city-wide collectives to more grassroots neighbourhood projects. People are working hard to make London less lonely. Of course, there’s a lot of hard graft involved. But there’s also a lot of fun to be had by bringing people together across the city.

A multi-national construction company and non-profit action group might not be an obvious partnership, but in October 2018 Lendlease and Collectively launched The Loneliness Lab.

It’s one of the bigger initiatives in the city, created as an 18-month-long project involving artists, NGOs, designers, community groups and local authorities with pilot projects being developed across London in 2019. One of the core ideas is to re-think and redesign place and space to encourage communal experience.

So far, ideas trialled have included transforming a declining market into a ‘Public Lounge’ and handing out free craft kits on public transport to encourage interaction in what is arguably London’s least-sociable shared space.

You can connect people with lots of small changes, or with one simple idea. For the charity FoodCycle, it’s all about bringing people together to cook eat and chat. It’s been running across the UK as well as several London boroughs since 2009. Volunteers cook meals made from ingredients which would otherwise go to waste. In the past ten years, they’ve served 1 million meals to their guests.

“We started because we thought that so much perfectly good food is being thrown away every day. Yet people are going hungry or feeling isolated. When they could be sitting down and sharing a healthy free meal with each other, and meeting new people. I love what we have achieved and are achieving. By using food waste, we bring people together feeding bellies not bins. But we’re also impacting on loneliness and growing real friendships amongst our guests.” explains Sophie Tebbits, Head of Programmes.

Volunteering in general is a good way to combat loneliness, as suggested by Mind and other organisations. Not sure where to start? The Team London website lets you filter by interest/borough/skillset/etc. Covering anything from driving, to tutoring, skill sharing, mentoring and a whole lot more. If you don’t have tonnes of spare time or can’t make a long-term commitment then there’s always speed mentoring.

Although we’re all collectively hiding behind screens more, technology can still work to combat isolation. There are several Meetup groups set up to help Londoners meet each other. Students at 23 Code Street decided to use their coding skills to help older and younger generations of Londoners to connect IRL. For their graduation project, Tiah Harrison and her fellow students developed an app called Generation Meet. At the time of their course, winter was on the way. People naturally stay in more, so they decided to make something to address isolation.

“One of the problems was trying to tie down who should be the target audience. It’s more widely known that the elderly experience loneliness. But they aren’t the only ones. We didn’t want to just tailor the website to the elderly. It’s for anyone who feels loneliness. However, trying to tailor a website and make it accessible for all is difficult. It was trying to make the website attractive to everyone, but accessible at the same time.” — Tiah Harrison, Generation Meet.

It’s early days, but in its current iteration, Generation Meet connects users with telephone and face-to-face befriending services. Times are scheduled for an older person and their volunteer befriendee to talk or meet up. That could be anything from knitting and wine tasting to gardening. The data the user punches in finds local meetups in their area.

Some projects are borough or neighbourhood focused. In east London, Everyone, Everyday is a network of hundreds of people working on different projects. It runs three pop-up shops. But they don’t sell things. Instead, they’re geared towards practical and useful activities. From money-saving tips and skills to an informal creche (where parents take turns to look after the children) and collaborative business working.

Bridging the old north vs south London rivalry is North London Cares and South London Cares. The Cares community networks connect older and younger generations through social clubs. These involve anything from dancing to podcasting and games nights, as well as befriending and local outreach schemes.

In west London, Action West London is a registered charity and social enterprise focused on some of the root causes of loneliness. Its key objectives are to help people with securing employment, education and self-employment/business opportunities.

How to start your own London community project

There isn’t a project or group in your area and you want to get one going? start by taking a look at the results and insights of existing London community projects.

The Participatory City Foundation (who worked in partnership with Barking and Dagenham to launch Everyone, Everyday) outlined a set of common principles for a successful community project. They include:

FoodCycle are also always on the lookout for new opportunities, and new areas to expand to. In the meantime, Sophie Tebbits advises asking the community what they would like in the first instance, then get as many different people involved as possible to generate ideas and be open to feedback.

Whether it’s leading or joining a community project, offering our time and skills, or chewing the fat over a hot meal, most of us Londoners are just trying to find common ground, and there’s plenty of it about.

Many of London’s choirs are community-driven groups, with about as many themes, causes and audiences than you could shake a stick at. There’s really is something for absolutely everyone—even if you don’t want to perform. What’s more, many choirs don’t require an audition. Check out of guide to London’s best community choirs for more information.

Further reading: 5 Community Cafes in London for Bringing People Together