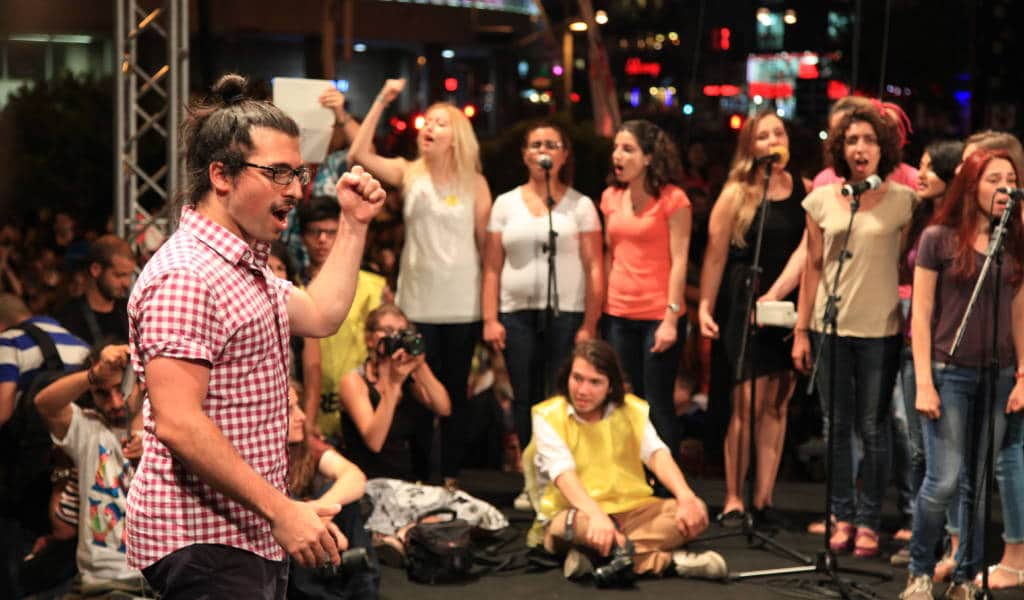 For some, choir practice brings up unpleasant memories of musty school halls and wonky renditions of show tunes. But for a growing number of people, singing with a choir in London is a joyful form of expression. Good for the mind, and a way of finding connection in an often isolating city. Interested in making London a less lonely place? Check out our favourite community projects

Different types of choir in London

There is a choir for pretty much every genre, niche and demographic you can think of. All over London, you can find non-audition, gender-based, political, LGBTQI+, community choirs and more. Love belting out power ballads? Join the Rock Choir. Pop more your thing? Go for the Popchoir. Dreaming of the chorus line? Check out the West End Musical Choir. The list goes on.

Amateur singers, actors, activists and everyone in between are gathering together to sing—even if they’ve never sung in public before. It can be a hobby, a chance to perform, and a way of finding a community. Whatever your motivation, joining a choir in London can be a regular social activity that won’t rinse your budget.

Fees vary from totally free to small monthly, termly or annual fees. Many of the big (and smaller) choirs don’t even hold auditions. Popchoir, Singology, Rock Choir, Some Voices, Chaps Choir, SHE Choir, and Many Voices are all non-audition groups. And you can usually try out a taster session first.

The many benefits of singing with a choir in London

There has been a big, UK-wide surge in the number of choirs in the past few years. According to research by Voices Now, there are over 40,0000 choirs across the country. That’s roughly 2.4 million people coming together to sing.

Londoners are embracing that trend with full-throated enthusiasm too. One of the big reasons is the positive effects it can have on our physical and mental well-being. Studies including a paper by Canterbury University have found that choral singing can help alleviate stress and symptoms of anxiety and depression.

Just like regular exercise, there are physical health benefits too. Singing improves blood circulation and boosts oxygen levels in the blood. That increases energy, alertness, helps memory and is even a workout for some of your upper body muscles.

Someone who knows all about the positives of group singing is Choral Director Mark De-Lisser. Mark runs Singology, a non-audition choir with branches across the city that sing gospel, pop and R&B music. It currently has over 200 members across nine locations including London Bridge, Greenwich, and Forest Hill.

“Starting the Singology Choir was born out of the desire to get lots of people in the same room experiencing the joys of singing and meeting other people. It’s warm and welcoming and a place that anyone can call home.“ He tells us.

An escape from the norm

One person to have found a home at Singology Choir is Emma Ferguson.

“I work in quite a stressful and emotionally demanding job. I love the opportunity to really switch off from the outside world and have some ‘me’ time.”

“Singing can be quite a ‘mindful’ activity too, it helps me to focus on the present moment. I’ve made lots of new friends of different ages and backgrounds through Singology, including people I probably wouldn’t have met in other areas of my life”. She says.

Starting a new group activity can be daunting, especially if you’re shy. But choirs are just another way of socialising through a common interest. Chris Moor joined one of the UK’s biggest choirs, Rock Choir two years ago after some encouragement from his family. It’s become a big part of his life, as he explains.

“I mainly joined because I needed an interest to get me out of the house a bit. It took a while, but when I came to feel accepted”.

“I found my fellow choir members to be the most wonderful, supportive friends who have really brightened up my life. It still shocks me how shy, quiet, utterly lacking in confidence I was… now I’m right at the centre of things and doing solos!” He adds.

Singology Choir’s Mark De-Lisser has seen plenty of shy members overcome their nerves and find a way to connect with audiences too.

“Most people come in with a very nervous energy. But the biggest change is when they perform for the first time. There is a massive transformation and injection of confidence which is a joy to see.” He explains.
Choir performances have also moved to stages beyond community halls and churches. Plenty of people dream of performing at festivals and major music venues. But singing with choirs has turned that into a reality for several of London’s groups.

Taking to the stage

Emma Ferguson sang backing vocals for Stormzy at V Festival with Singology in 2017. Another highlight was singing as part of Jazz Jamaica at The Royal Festival Hall in 2018, as she recalls.

“It was an opportunity to learn to sing a different genre (reggae) and to be part of a huge choir, as Singology was joined by Voicelab, the choir at the Southbank Centre. Singing alongside the massively talented jazz orchestra and one of my childhood idols Brinsley Forde of Aswad was amazing!”.

While lots of people sing with a choir for escapism, others come together for political and social causes. Raised Voices is a political choir that has been going since 1986, singing at demonstrations and political events. Other groups include Rebel Choir, which doesn’t have formal membership, Protest in Harmony and Holler4 Activists Choir.

Being serious about a cause doesn’t mean more politically-motivated choirs aren’t having fun too. Lips Choir is a trans-inclusive, non-auditioning women’s pop choir. Led by Jessie Marryon Davies, the group is known for joyous live shows—Jonelle Monae is a fan, apparently. Lips Choir started as a group of friends in 2009. Now they have over 80 regular members and have played some huge gigs, including backing Goldrfrapp at The Royal Albert Hall.

Diverse in every sense

It’s a mix of influences and the joy of singing together that makes Lips special for members and audiences alike, as Vic, one of its board members explains.

“We learn by ear and most of us don’t read music. We’re a joyous space that’s fuelled by laughter, fun and the joy of singing together (and the party afterwards, of course).” She says.

“Our members and influences come from far and wide – we’re as likely to weave garage classics into Bjork arrangements as we are to belt out no-holds-barred All Saints covers. Our live shows really are something to be experienced. We have months and months of rehearsals to create something we’re all proud of. It’s a great bonding experience”.

Lips Choir also supports Women for Refugee Women and raises funds for them at gigs. They’re in good company too. Other London choirs with similar sensibilities include She Choir, F*CHOIR, and Deep Throat Choir. But it’s not just political choirs that use their voices for fundraising. Most choirs in London, including Singology, perform at smaller, community events to raise money throughout the year. Rock Choir has regular fundraising performances too.

Singing without the pressure of a performance

If you’re keen to sing with a group, but suffer from stage fright, don’t be put off. Performances are encouraged by choirs, but they’re not always mandatory. Taking part in regular rehearsals can be enough, as Mark De-Lisser explains.

“Most of Singology Choir members do perform. Some don’t enjoy performing publicly and prefer the rehearsals but that is totally fine. Take what you need from the choir and leave what you don’t.”

Finding the right choir for you

There are currently over 250 choirs in London. With so much choice on offer, how do you decide which choir is for you? It’s pretty easy to search by genre, audition criteria and area. If you’re going to do it weekly, you might want to find somewhere local to work or home.

But sometimes, it’s a case of being in the right place at the right time. Liam Palmer had been playing in a band that incorporated choral and chamber harmonies into their music. He was looking for a choir in London when he discovered there was one at the Royal Academy of Arts, where he works.

“My grandmother always said “singing is good for the soul” and this is what I get out of it. There’s something about a big group of people singing together that really moves you. As it’s a work choir, I’ve met people in more departments too.”

And if you really can’t find one to fit the bill, you can always start one yourself. Just ask the Lips Choir. “If we can do it, you can too! London needs more creative space for like-minded people. We’re always happy to provide any advice we can to people thinking of starting something”, Vic—Lips choir.