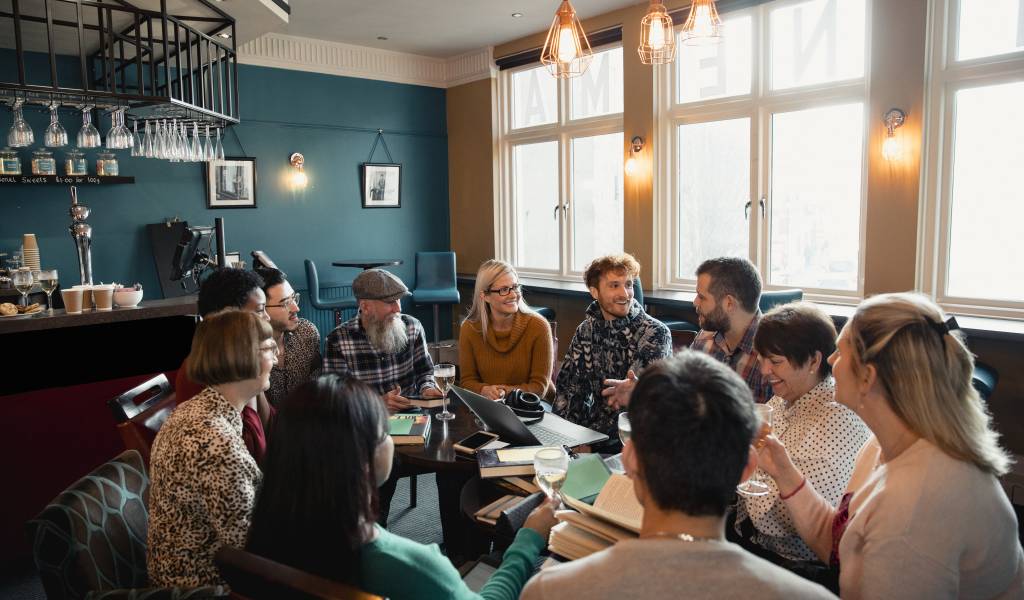 London’s reputation as not always the easiest and friendliest city is kind of true. Yes, people will barge you out of the way for the last available seat on the tube, and a lack of personal space will fray most tempers on daily basis during the dreaded rush hour. But, that’s not the whole story. It can take a bit of time to find your people—like-minded individuals with whom you can meet up and moan about how everyone in London complains all the time, and so on.

Meeting people through shared or niche interests is getting easier. Whether you’re shy in social situations, looking for someone to go on the run with, or talk about books and films with or want a dance partner, there are plenty of people who feel the same.

Here are our recommendations for London social clubs and meetups:

Facebook groups or Meetup groups aren’t just for career opportunities or networking, there are lots of social groups too.

But, if you’re feeling overwhelmed by options, or apprehensive at meeting new people, start with the London Shyness Meetup group. They encourage people to join up, with no pressure and are empathetic to those who experience social anxiety, shyness and depression.

As the organisers “Join and meet like-minded people. No pressure to talk, just be there”

Love a solo matinee or going to see films your friends roll their eyes at? You’re not alone! London has film clubs for pretty much every niche.

Own your so-called ‘guilty pleasures’ (or films you’ve possibly never heard of) at Crap Film Club, where laughter and live commentary will not get you kicked out of the screening.

The straight-to-DVD fodder featuring the likes of Rats: Nights of Terror, Aerobicide (killer workout) and short-person Bond spoof For Your Height Onlyare shown at The Book Club, near Old Street on the 4th Wednesday of each month.

You don’t have to become a member to attend, but advance tickets are available for £4.00

Over in Rotherhithe, you can explore world cinema at Sands Film Club. Weekly and monthly screenings are held at the Sands Film Studio. To join, sign up for free membership and pre-book to attend.

Meanwhile, at The Duke Mitchell Film Club, resident host The Duke has been hosting free,  obscure, cult and odd film events for the past ten years, mainly at The Prince Charles Cinema.

There are book groups all over London, you can search by genre, niche, area, era etc. A couple of the bigger ones include.

A couple of the bigger ones include:

East London based book club, hosted at Brick Lane Book Shop focusing on modern fiction. They meet every month, on a Tuesday 9 pm9pm for book chat and drinks (BYO booze) in a friendly atmosphere. Anyone with a love of books is welcome, you just need to email contact@nquentinwoolf.co.uk if you want to come along, and check out the Facebook page for a list of upcoming books.

Some of London’s most inclusive, fun and socially active group are choirs. There are choirs for every musical taste, background and belief system, many of which don’t even require auditions. Check our guide for a full list of London best community choirs.

Combine a love of running with some volunteering atGoodGym. You can run with your local GoodGym group (they’re based all over London) for free, or make a donation if you wish. The easiest way to get involved is to participate in group runs, usually led by a personal trainer running coach to a task which is usually in the local community, like a school or elderly person’s home, or park.

There are also different groups for various ages, fitness levels and interests from hiking to bootcamps.

Step out, and find others who want to swing, jive, lindy hop and any other form you’re into.

One of the bigger groups is London Free Swing. Join their Meetup page for Charleston taster sessions, free swing classes and demos from groups like Swing Patrol across London.