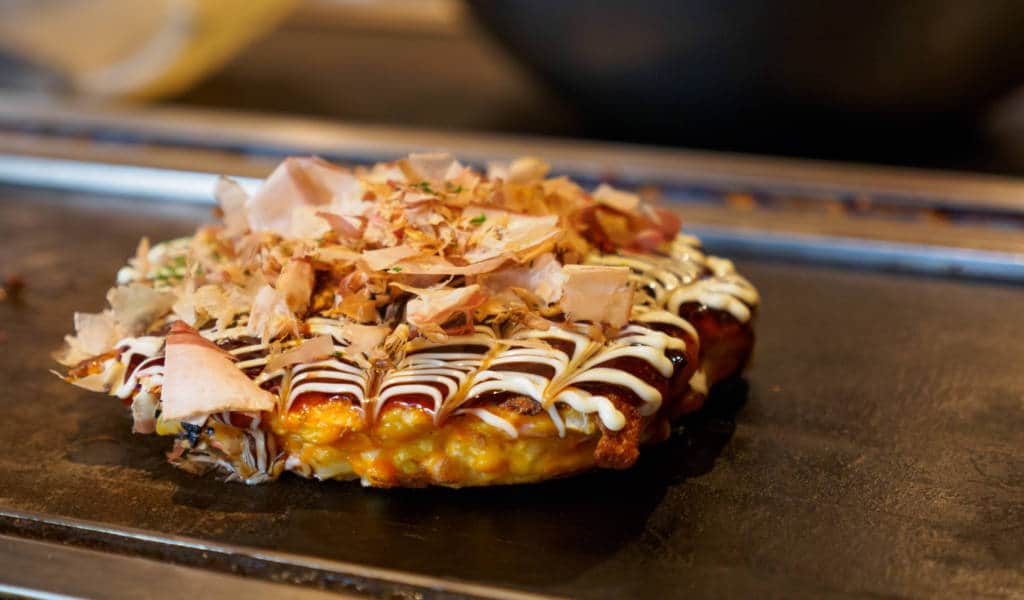 London Pancakes From Around the World

To the UK, Ireland and a few Commonwealth nations, Shrove Tuesday is pancake day, a tradition that began as a last opportunity to binge before fasting over the Christian holiday of Lent.

These days, for many of us, it’s just an opportunity to make pancakes before carrying on with our lives—business-as-usual. But there’s no reason not to treat it as the feast it once was! Whether you’re looking for brunch, lunch or dinner, here’s a few delicious London pancakes from around the world to get your mouth watering before the big day.

One of Japan’s best loved comfort foods, okonomiyaki is as good as pancakes get. Born in Osaka (known with good reason as Japan’s Kitchen), okonomiyaki is a savoury fried dish, generally made with eggs, flour, cabbage and grated mountain yam. Feel free to drool over our Tokyo okonomiyaki guide.

For the record, Hiroshima is known for its rival style of okonomiyaki. It’s a more complex layered affair which usually includes fried noodles. We’ve not spotted any Hiroshima okonomiyaki spots in London yet. But when we do, they’ll have to pry us out of their seats with their spatulas.

For our money, you can’t go wrong with Okan in Brixton village. With its tiny stainless steel-clad kitchen, talented chefs and a busy Japanese aesthetic, it’s about as close as you’ll find to a real slice of Osaka in London. Just chat with friends over the sounds of the sizzling hotplate and clattering spatulas. Your food will be with you in no time flat.

Handily, it’s also just next door to Senzala (more on that later) in case you fancy hopping over there for dessert! If you’re looking for a more central spot, Okan also has a South Bank branch.

Buchimgae, chijimi, jeonbyeong. They go by a bunch of names, but here in London you’ll usually just see them called Korean pancakes. Savoury and sometimes a little spicy, you’ll often see two kinds on the menu. Kimchi pancakes are a staple, slightly crispy on the outside and soft and fluffy on the inside. Seafood variants are popular too, usually stuffed with prawns, squid and spring onions. Either makes an excellent accompaniment to Korean fried chicken and beer, which London has no shortage of.

On the Bab, Soho, Shoreditch and St. Paul’s

On the Bab in Shoreditch has great pancakes—and their Korean fried chicken is among London’s most authentic. And happily for some, their deliciousyangyum sauce lacks the fieriness of many of its native counterparts.

Bring friends and enjoy over a few bottles of Hite beer. If you’re feeling extra frisky, share a bottle of fruit flavoured soju (a fairly mild Korean spirit) alongside your usual drinks. Or add a shot of original soju to your beer to make a somaek.

These southern-Vietnamese crispy folded pancakes are usually stuffed with beansprouts and seafood. Then there’s a thin, pungent sweet chilli sauce on the side. A popular serving method is to break off a piece, wrap it in lettuce (or other greens) then dip it in the sauce. While they’re delicious and satisfying, they do tend to fall apart—so give up now on the idea of eating them gracefully.

Formerly Little Saigon, this foodie hotspot is a reason in itself to live near Leytonstone. With great food, plenty of space and friendly staff, meals here are full of bright, fresh flavours. They’ve really nailed the family feel. It’s not unusual to see staff eating their meals together, or to see the kids entertaining themselves quietly around the shop.

If you’re sharing, the sizzling beef is also a great pick. The sauce was apparently concocted by a grandmother back in Vietnam. It was so popular with the family they started serving it in the restaurant.

If you’re looking for something more central, Moc Kitchen is another great option. Nestled under a railway arch near Embankment, this hidden gem never fails to deliver on taste. As the staff shirts say, “food was made for sharing”. So be sure to grab a few different dishes and split them with your friends. Interesting picks include the caramelised catfish and the duck black rice.

Stacked high, the cartoonish ideal of an American style pancake comes topped with a pat of butter and drowning in maple syrup. But these days, you’ll find them piled with all kinds of sweet and savoury toppings. There’s plenty of great articles out there on where to eat American pancakes, so we won’t go into too much detail here!

The most famous London pancake destination is probably Breakfast Club, which has branches in Soho, London Bridge and Spitalfields. renowned for their rustic modern food, quirky interiors and upbeat staff, people come from all over the world to eat there. So you can expect a queue, packed with international Instagrammers—especially for breakfast and lunch. That’s every day of the week.

We went for the berry pancakes, which is probably more pancakes that anyone should eat in a single sitting. And yet we have no regrets. If you’re getting other food first, don’t make the mistake of ordering your pancakes at the same time. Wait until you’re good and ready—there’s a short window of optimal deliciousness for pancakes like these.

French pancakes in London fall broadly into these two categories. Crepes are the classic thin pancakes—if you grew up in the UK this is probably roughly what you remember eating on Pancake Day. Popular sweet toppings here include sugar and lemon, berries, bananas and Nutella. These pancakes are easily made at home, though some London pancake spots have especially good examples.

Galettes are a heartier, usually savoury pancake, made with buckwheat flour. As a rule that makes them gluten free. For toppings, you can’t go wrong with the cheese, ham, and a fried egg, a classic favourite.

Senzala in Brixton Village adds its own flair to crepes and galettes, with over a dozen unique options for each. It’s a bright, eclectic little shop, peppered with rustic art and a colourful crew of staff and patrons—well worth dropping in at lunchtime while you’re in Brixton.

Prices start at around £6.00–£7.00. If you’re struggling to choose, the aptly named “The GOAT”, with goats’ cheese, baby tomatoes, olives and spinnach is a satisfying place to start. On the sweeter side, toppings include bananas, berries, chocolate, to name just a few. There’s also an extensive vegan wine and beer list.