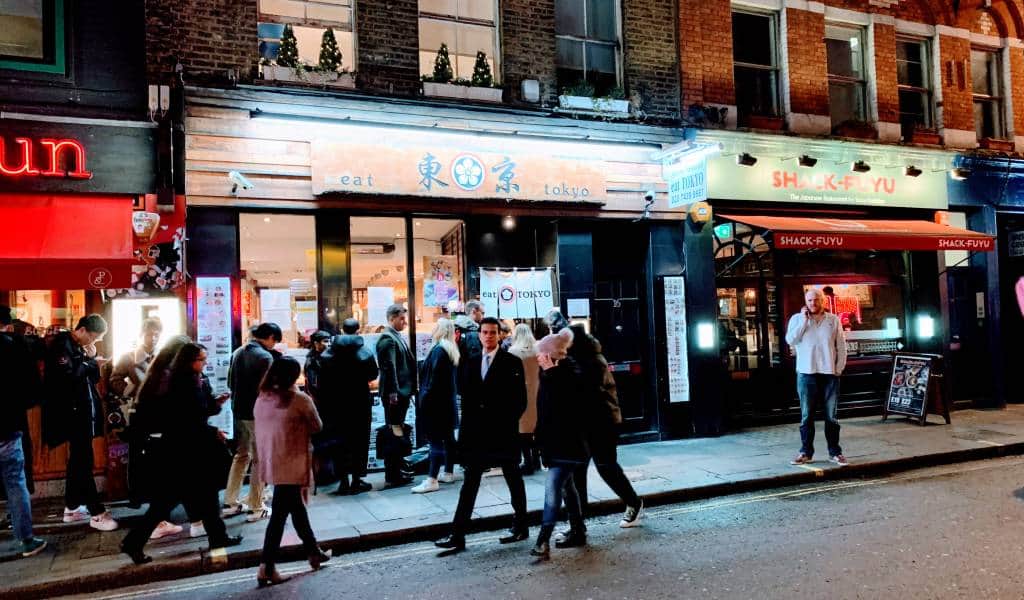 Top Free and Cheap Things to Do in Soho

Ah, Soho—the busy central London area with its infamous reputation for hedonism and sleaze, and home to film companies, legendary music venues, and general creative shenanigans. Soho is where media professionals tussle for space alongside tourists, cabbies and rickshaw drivers, but there’s plenty to see and do without spending much. We’ve rounded up ten of our favourite free and cheap things to do in Soho, so watch out for fast-moving bike couriers and take a Soho tour, cheapo-style.

1. Eat outside at Berwick Street Market

Berwick Street Market is one of London’s oldest markets, and it’s been feeding hungry Londoners since 1778. You can pick up more traditional market fare like fresh fruit, veg and flowers as well as street eats like falafel, burritos, souvlaki and paella. Unsurprisingly, lunchtime is the busiest time to go, but it’s open Monday to Saturday from 8 am to 6 pm so plenty of time to beat the queues.

London’s largest gallery specifically dedicated to photography with regular exhibitions, talks workshops, film screenings and VR experiences. Some exhibitions are free, but plenty of ticketed events will cost a tenner or under. The Photographers’ Gallery also hosts the Deutsche Börse Photography Foundation Prize each year. It’s open seven days a week, and there’s a decent bookshop and café as well as six floors of gallery spaces to explore.

3. Sniff out the Seven Noses of Soho

In the 1990s, artist Rick Buckley added a set of noses across central London. His identity wasn’t revealed until 2011, and now only about 10 of the original 35 remain, affixed to walls across London—seven of which are in Soho. Don’t have time to follow your own nose? There are some tours and clues to help you get on to the scent.

Development and high rent means that there aren’t quite as many record shops in Soho as there used to be, but there are still a few crates to go digging through on its streets. If electronic music is your thing, head to Phonica on Poland Street. For pretty much anything head to Sister Ray or Reckless Records. For soul and funk, head to Sounds of the Universe.

Sounds of the Universe

If you love Harry Potter, but don’t want to fork out for a big studio tour, head to House of MinaLima on Greek Street. It’s a small, free exhibition of art and graphics from the Harry Potter and Fantastic Beasts films from Miraphora Mina and Eduardo Lima—two designers who helped to bring the magical creations from the books to life for the big screen. The exhibition includes prints and props which are on loan from Warner Brothers. Free entry.

Ronnie Scott’s isn’t just a legendary London music venue, it’s one of the oldest jazz venues in the world, which has been hosting acts since 1959. Nina Simone, Prince and Buddy Rich have all played there. The main venue is the downstairs bar, where tickets are around £30.00, but you can see live music upstairs seven nights a week for under a tenner where there could be a mix of jazz, cuban, slam poetry, R&B and samba.

7. Eat cake and look at art at Maison Bertaux

Maison Bertaux has been serving up French cakes and pastries since 1871. It’s a quaint, cute, old fashioned cafe with a gallery upstairs. It’s fairylit and filled with kitschy memorabilia from mini statues of Mother Theresa to old books. Go to savour sweet treats and marvel at the maximalist slice of old Soho.

Soho might be a stone’s throw from Theatreland, but if you’re looking for an alternative to big West End shows (and big spendy ticket prices), Soho Theatre is the place to go to have your funny bone tickled or to see some new theatre or cabaret. Phoebe Waller-Bridge performed her one-woman Fleabag show there before it became a hit TV show, and Hannah Gadsby did two runs of her Nanette show before it was a Netflix special, so it’s an exciting place to see previews or discover performers as they break through to bigger venues.

Radha-Krishna Temple on Soho Street isn’t a typical large, religious building, but a functioning temple with a vegetarian restaurant below that welcomes all visitors. If you want to enter, you have to speak to the receptionist who will answer any questions you have before you go up to the temple room on the first floor for a moment of quiet reflection in one of London’s busiest areas.

10. Check out a free event upstairs at Foyle’s

Foyle’s is a book chain, but its largest store is on Charing Cross Road, in a building that was once part of a famous art school: Central St Martins. The fifth and sixth floors are home to a large, bright and airy cafe and gallery/performance space. There are temporary exhibitions which are free to visit, as well as regular events including free writer talks, readings, live music and book launches.

11. Check out the murals of Notre Dame de France

It may surprise you to learn that Soho has its very own Notre Dame. Despite the similar sounding name to the French landmark, this London church looks quite different. It might not be as interesting to look at on the outside, but head in for some interesting artwork. Once inside, head to the Lady Chapel where you’ll find three murals depicting the life of the Virgin Mary painted by French artists, film director and writer Jean Cocteau, and they’re the only artworks of their kind outside of France.

12. Catch independent and cult films at The Curzon Soho or the Prince Charles Cinema

Soho has long captured the imagination of filmmakers including Alfred Hitchcock, John Landis and Edgar Wright, but it’s also a great place for film lovers too. In fact two of London’s best cinemas are just a few streets away from each other. Curzon Soho’s neon-lit sign lights up Shaftesbury avenue and is a great place to see non-English language films, independent films and arthouse cinema. There is a cafe upstairs and bustling bar downstairs for drinks and lively post-film discussion after too. If cult movies are your thing, head to the Prince Charles Cinema for one its legendary sing-a-longs, late night screenings and for the hardcore – there’s the allnighters too.

Soho has a number of pubs dating back hundreds of years. From one of Dylan Thomas old watering holes to a pub with no music, no television and no mobile phone calls, there’s quite a variety of interesting old pubs in Soho.

14. Grab a nightcap at a cocktail bar

We could easily dedicate an article to the food and drink of Soho, (in fact, we have a few). But, if you’re looking for a place to round off the night or grab a late night drink – this is one of the best neighbourhoods in town for cocktail bars. For dimly lit, speakeasy style bars with with excellent cocktails, head to Disrepute (it’s technically a members bar, although open to non-members but book ahead), or head the downstairs bar at The Swift on Old Compton Street to sip drinks, old-Soho drinking den style.

If you’re here in the Summer, be sure to visit Soho’s fabulously eccentric village fete. There’s usually a dog show, spaghetti-eating contest, a tug-of-war between the Soho police and fire brigade, a human fruit machine and the famous Soho Waiters’ Race.