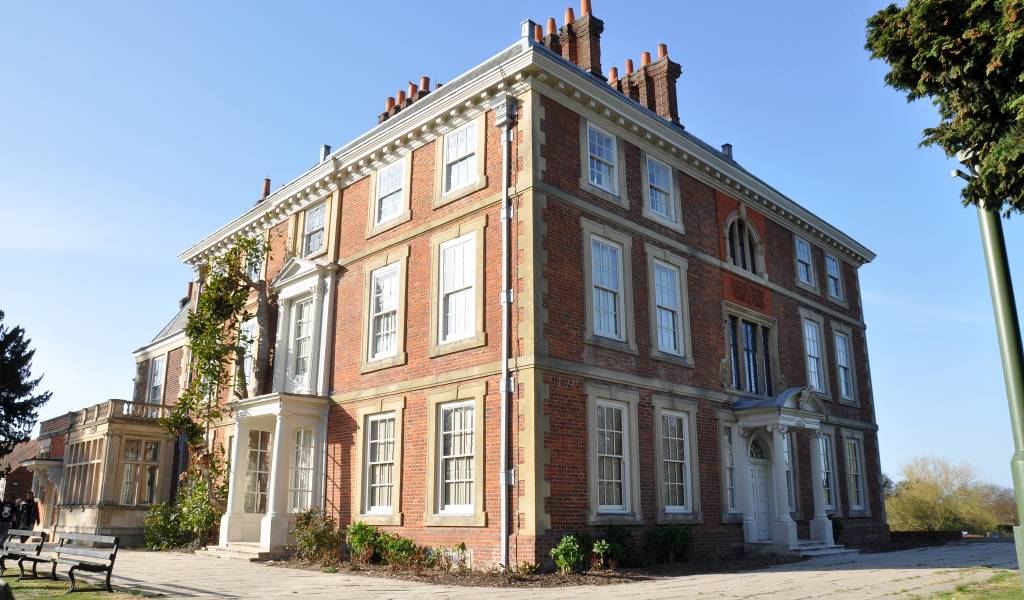 Enfield, the sprawling north London suburban area that crosses into Hertfordshire, is full of hidden gems and interesting history. In recent years, the spooky urban legend of the Enfield Poltergeist has been the subject of a TV series. We’re not going to take you ghost hunting, but we will be exploring the past. Most stately homes in and around London charge an entry fee, but lesser-known Forty Hall is run by Enfield Council is free to visit.

It’s about an hour from central London, the nearest stations are Enfield Chase (40 mins from Moorgate) or Enfield Town (42 mins from Liverpool Street) and then a short hop on the 191 bus to the bottom of Forty Hill. Then it’s a short, leafy walk through a fancy old village neighbourhood, similar to Hampstead.

Cliche warning (well, it’s true): as you walk up the drive and arrive at Forty Hall and its impressive estate grounds, it feels a long way from London.

Its past goes back a long way too, all the way back to the 17th century in fact. The house was built by former Lord Mayor of London and Master Haberdasher Sir Nicholas Rainton between 1629 and 1636. Rainton made a fortune from importing Italian silk and other fancy textiles.

Despite being knighted in 1633, he was briefly imprisoned in the Tower of London a few years later for refusing to list inhabitant of his ward who were able to contribute £50 or more to a loan for King Charles.

Rainton and his wife didn’t have children, so the hall was passed down to his great-nephew, also called Nicholas. The Rainton legacy ended with the marriage of the second Nicholas’ daughter Mary to Sir John Wolstenholme.

The Wolstenholme’s gave the place an 18th-century makeover (it was more fashionable to have lots of smaller chambers than huge rooms). Henry Ferryman-Bowles bought it in the 19th century and it remained in the Bowles family (yeah, Camilla Parker-Bowles’ ancestors) until 1951.

The council has owned it ever since, and the grounds were used by locals but the hall itself was underused until a heritage lottery funded restoration in 2012.

Wondering around the large, light-filled house and one thing is notably different to most houses like these: there are no red ropes in front of ornate furniture. Both children and full-grown visitors are invited to explore, sit down at tables and pick things up.  It also has a lift so that all floors are accessibility-friendly too.

On the ground floor, you can wander through the great hall, with its impressive furnishings. The kitchen is used for live cookery demos, where you can get involved in some 18th-century-style pastry making, without spending any dough.

Walking up the stairs past stained-glass windows, there are little stories from the hall’s past all around, and small details that are a window into the lives of those who lived there. A ‘ height door’  by the gift shop has hundreds of heights and signatures scrawled on from the 19th-century Meyer family through to the 20th-century Bowles’.

One room has a small table with chess board set up, in honour of the human chess game that took place on the lawn in the early 20th century.  Another dining room has a similar Alice in Wonderland vibe, with a dinner table replete with playing card napkins and replica fruit that you can pick up.

Kids are encouraged to dress up in fancy old hats, and fun animal parade costumes. Adult fancy dress isn’t frowned upon either, but it was a hot day and I was on a private tour, so I decided to leave big elephant’s head where it was.

Also used as a venue for hire (weddings, birthdays, school groups and conferences all take place here), Forty Hall is an interactive historic home, where old and new sit well together.

No ghosts to report here, though there are rumours of the boots and chatter of dead soldiers hiding in one of the bedchambers. Maybe a return trip for their Halloween events might coax out some spectres.

If you’re in need of 21st-century refreshment, the Nice Green Café is a bright and welcoming place for a cuppa and a slice of cake.

Interesting stuff to see outside

There’s plenty to do in the gardens and parkland too. The estate grounds are open even on days when the hall is shut, and it’s a mix of tourists, school groups and joggers. You can wander around on foot or hire a bike or mobility scooter for free.

The pleasure garden and grounds are a mix of open, beautifully kept lawns, fields and rambling paths

The walled garden is filled with colourful, beautifully scented flowers, and the estate is filled with trees that have been on the site for centuries.

On sunny days, people hang out under the shady trees by the Ornamental Lake which sits directly in front of the Hall.

The estate also overlooks the site of former Elysing Palace, owned by Henry VII and now an archaeological site.

The farm is open on weekends,  for a small fee of £2 for adults (free for kids).  The aim of the farm is to demonstrate and promote sustainable food production, you can see animals, including rare breeds and buy produce from the farm shop. The farm is also home to London’s first commercial vineyard since medieval time, which is run by community volunteers.

The estate is always on the lookout for volunteers to help out with anything from dressing up as the character for events, to horticultural types who can help on the grounds.

Opening times vary throughout the year, but it’s always shut on a Monday.  Summer from 1st April – 31st October the Hall is open from 11 am – 5pm Thursdays to Sundays. Winter opening from 1st November to 31st March Thursdays – Sundays 11am – 4pm.  Opening is from noon at weekends and bank holidays.

If you’re visiting from outside London, and have the time, explore nearby Myddleton House Gardens too.

Forty Hall is a worth a trip for anyone who likes to nose around historic houses for free and wants a bit of country escapism just a short trip from the centre of London.