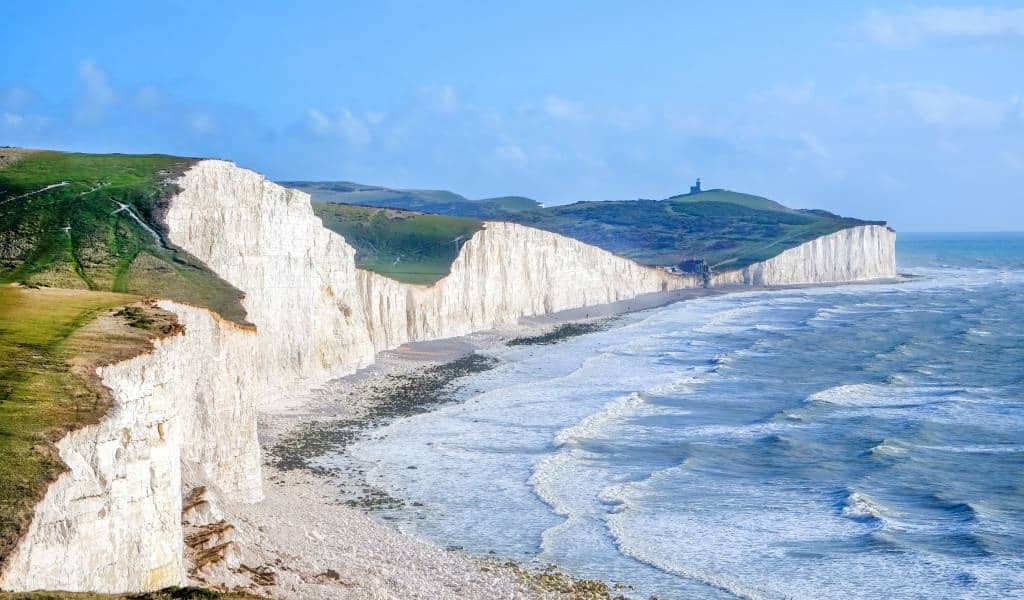 London is filled with green spaces and some pretty spectacular city views. But even diehard city dwellers need to connect with nature, nowadays more than ever. Fancy something a bit more challenging and less urban? Take a hike beyond the city and discover rolling hills, chalky clifftops and ancient ruins. All of the featured hikes are within an hour or two’s travel time from London for weekend walking or ambitious daytripping.

You won’t need to be an expert hiker with tonnes of gear to do these either—you’ll just need decent footwear and enough stamina to walk more than five miles. For serious peaks and hiking challenges, you’ll need to travel much further afield and head to The Lake District, The Scottish Highlands, and The Welsh Mountains.

Londoners frequently hit up Brighton at the merest hint of sunshine. But as lovely as it is there, Sussex has plenty of other, less-crowded spots for coastal trails and sea views from on high. One such hike is The Seven Sisters Cliffs Walk where you can marvel at the sea and nautical landmarks. Be very careful when walking close to the cliff edge; it’s a very steep drop.

It’s called The Seven Sisters because it’s a series of seven chalk cliffs, which part of the South Downs National Park.

This is one of the longer, more up and down routes that you can do in day trip from London. The steepest point is Haven Brown at 253 ft.

Along the undulating hike, you’ll be able to spot The Martello Tower, one of a chain of 103 fortresses that was built during the Napoleonic Wars. You’ll also see The Belle Tout Lighthouse, and you’ll end the trail close to the Beachy Head viewpoint.

The Chilterns span the counties of Buckinghamshire, Hertfordshire, Oxfordshire and Bedfordshire—so there’s no shortage of city escapism, rural rambling and nature to be found in this part of the country.

The Henley via Stonor Circular hike is a mix of woodland and farmland, where you’ll stumble upon quaint, Tolkien-esque hidden valleys, with some steep inclines. Look out for red kites too—birds of prey that circle above Chilterns.

There are a couple of country pubs along the hike too, including The Crown in Pishill, and The Rainbow Inn if you fancy a pint and a ploughmans before heading home.

Towering over the home counties: Ockley to Leith Hill (Surrey)

If you want great views, but a shorter trail, then check out the Ockley to Leith Hill route in the Surrey Hills. You can pick up the trail close to Ockley train station and follow the public footpaths that lead you to Leith Hill via Greensand Way and you make your way up the hill from there.

If you have the energy when you get to the top, head up the 78 spiral steps to the tower of Leith Hill Tower, which is the highest point in South East England at 1082 ft (313 m). It’s worth it for the view, on a clear day you use the telescope to see the English Channel and even the Big Ben clock face.

To get back to the station, make your way back down the hill, head south through Leith Hill Place Wood and Jayes Park and then you’ll hit the same paths that lead back to the train station

Another straightforward route to try out in the Surrey Hills area is the Mole Gap Trail (route info also avaialbe on the iFootpath app for iOS or Android). This walk is between the towns of Leatherhead and Dorking where you’ll also find Denbies Wine Estate, the largest estate vineyard in England.

Technically this might be more of a ramble than hike—there’s only one small steep incline, but there are a few obstacles to be aware of on this trail. You’ll have to pass through several ‘kissing gates’, which are far less fun and romantic than their name suggests. These are hinged gates that allow humans but not livestock to pass.

Paths can get pretty muddy too, so take decent, waterproof footwear—no one wants to get stuck in the mud! But, if it’s a sunny day, then you can break up the 3 hour walk across old bridges, fields and woods with some refreshments. There are plenty of options too. Stop for a picnic, have lunch at a country pub like The Stepping Stones, in Westhumble, or go for a wine tasting at Denbies.

Mole Gap Trail ends at Dorking train station, and the towns are only a 5-minute train ride apart, so you can easily return to the right station to get back to London.

There are plenty of hills and interesting sites along the Hastings Circular hike. Like the Seven Sisters route, you’ll be walking along cliff tops, although there is a forested inland route at some points too. It starts at Hastings Station, and goes past the seafront before you get to the steep, coastal path.

Along the way, expect coastal views, including Fairlight Glen Beach, which is a nudist beach that you can wend your way down to. You don’t have to be a naturist to visit though. The Hastings Circular also includes woodlands, and the ancient ruins of Hastings Castle.

Castle on the Hill (Essex)

Hop on the c2c from London Fenchurch Street and you can be in Leigh-on-Sea in less than an hour. Leigh-on-Sea itself is worth a visit, it’s a charming coastal town with cute architecture, pubs, and eateries where you can get your fill of freshly caught fish. Walk along the coast to the bridge to Two Tree Island. This land was originally reclaimed in the 18th century and it’s now a nature reserve with some beautiful and unique landscapes, mostly photogenic salt marshes and mudflats. The area is home to a lot of nature, including adders (the UK’s only venomous snake), so be aware and keep dogs on leads. There are 6km of trails for you to explore on Two Tree Island and you can leave the reserve by the low water crossing if the tides are with you, or do a circuit and exit via the bridge.

From there, head west for a bracing walk on the seawall over Benfleet Creek, with views of both the marshlands and the Thames Estuary. You’ll be within Hadleigh Country Park by this point and there are many options of trails to turn northwards and make your climb to the castle. Hadleigh Castle itself is a romantic ruin dating back to the 13th century and a wonderful place to stop and take in the view. Next, you can head back to Leigh or onwards to the neighbouring town of Benfleet. If you’re not done with awesome views (who said landscapes in Essex were boring?) you can climb 15 minutes more towards the Hadleigh Country Park visitors centre. On a clear day, you can see Kent, Southend Pier, Canary Wharf and the Dartford Bridge from the peak, all at the same time.

Ride West Midlands Trains from London Euston and you will arrive at Berkhamsted within thirty minutes. The picturesque market town is part of the Hertfordshire end of the Chilterns. There is some pleasant walking to be done around Berkhamsted itself, but for a proper hike, follow the path north of the castle to the war memorial. From there, go East through the golf course (there’s a public footpath through it but be careful and courteous of golfers!) to join up with the boundary trail of Ashridge Estate.

Ashridge Estate is a gorgeous area of the Chiltern Hills managed by the National Trust, with rolling hills, woodlands, rich wildlife, and a stunning stately home. The full Ashridge Estate boundary trail route is 16 miles long, but if that’s a little far for you, there are plenty of other paths to explore. I thoroughly recommend the trail through the beautiful Golden Valley. If you’ve joined the valley from the southern end, follow it up and you will see a path crossing it. Climb the banks on the left side and you will approach Ashridge House itself, an immense example of Gothic revival architecture.

Ashridge House is thirty minute’s walk from the Bridgewater Monument and the Ashridge visitors centre, which is a great place to finish your walk. Bridgewater monument is 33m tall and from April to October, you can climb 172 steps to the top where you can see the whole estate. If you’re more up for eating than climbing after your walk, the café at the visitor’s centre is open 10 am -4 pm.

One stop further than Berkhamsted on the train, Tring is the gateway to some gorgeous walks on the other side of the Ashridge Estate. Unlike Berkhamsted, when you exit Tring station you step immediately into the countryside, which is a wonderful feeling for anyone looking to take a break from London. Turn right out of the station, walk five minutes along station road and you can get on the footpath network. From here it’s 3.1 miles to Ivenhoe Beacon.

There’s plenty to enjoy on your way there. Once you’ve got onto the footpath near Tring Station, take the first or second path left. This route takes you through Aldbury Nowers, a nature reserve that looks like it came out of a storybook, complete with wildflower-filled meadows in the summer. Next, onto Pitstone Hill where you will join The Ridgeway, a path believed by some to be the first road in Britain. The views here are spectacular; on a clear day, you will be able to see all the way to Ivenhoe Beacon, your destination.

Ivenhoe Beacon is an ancient signal point, which was used in times of crisis to send messages across long distances, so feel free to call Rohan for aid, or just enjoy the views of the windswept landscape. You can either head back the way you came, or join the Duncombe Terrace Walk and make a circuit back to Tring using the footpath network.

You might associate Epping Forest more with “ambling” than “hiking,” but don’t underestimate this immense green space that Londoners have in their back garden. The ancient forest has over 284km of paths to explore, including nine official waymarked trails. These are circular routes with signposts in the forest to guide you, but you should also download free maps of the trails from the City of London website.

The longest of these routes is the Oak Trail, which is just under seven miles.
It starts at Theydon Bois station on the central line and takes you through Ambresbury Banks, one of two iron age earthworks in the forest, and past the deer sanctuary. If you’re new to walking in Epping Forest, the Oak Trail is a great introduction to what the forest has to offer, and you’ll soon be planning your own Epping Forest hike to explore the rest of it.

This post was originally published in March 2021. Last update: February 2022 by Julia Mascetti