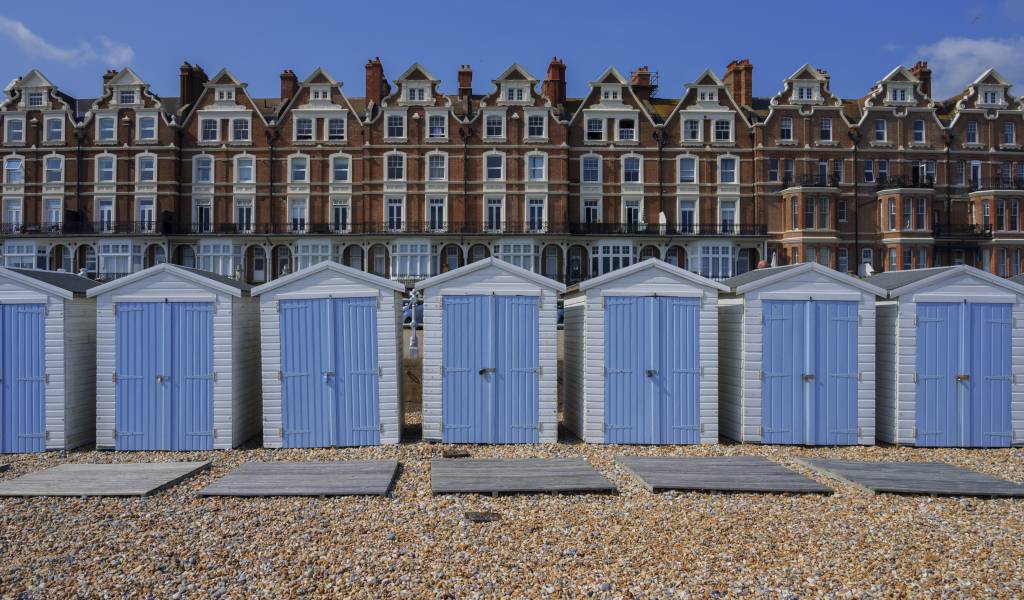 Getting from the city to the sea is a breeze. There’s plenty of variety—from quaint old-school promenades to more upmarket alternative beach getaways. The London seaside day trips featured here are easy to get to within two hours from central London and cost under £50.00 in travel fares.

Note: We looked at day returns for weekday travel, but be sure to check the prices of returns, as well as tickets on different days, for potential savings. Fares vary quite a bit!

Not your typical seaside hangout, Brighton has always been one of the UK’s cooler, edgier coastal towns. It has most of what Londoners love about the capital’s best neighbourhoods: great pubs, music venues, clubs, restaurants, independent shops and cafés. But it has the one thing us Londoners don’t—a beach.

It’s a pebble beach, rather than a sandy beach, so factor that if you’re craving a walk across some sand. However, with so much else to do besides taking in the sea air, it’s fun to visit Brighton all year round.

At just over an hour’s journey time from central London, it’s perfect for a day trip. The main hub for wandering about away from the seafront itself is the Lanes. It’s a maze-like cluster of narrow streets filled with great, independent places to shop, eat and drink. You can also peruse curios, vintage finds and random chintz at Snooper’s Paradise, check out street art in North Laine and stick around for live comedy at Komedia in the evening (in ordinary times, anyway).

There’s no shortage of great places to eat and drink in Brighton—if you’ve a craving there’s somewhere to satisfy it, particularly if you’re veggie or vegan. Modern Indian restaurant The Chill Pickle has great lunchtime Thalis for £16.00–£18.00, or go for low-key Vietnamese street food at Milk No Sugar, close to the station. But you’ll never be more than a stone’s throw from a decent place to eat in Brighton, whatever your dietary requirements. If you opt to eat outside though, be warned– the seagulls are massive and notorious for swooping down to steal chips from unsuspecting tourists.

Transport is easy, there are lots of trains running on both the Southern (From Victoria) or Thameslink route (via St Pancras, Blackfriars and Farringdon). Going from Victoria is roughly £10.00 more than going via Thameslink though, so your best bet is from one of the other stations listed. Then you’ll have a healthy chunk of change left over for chips. Just be sure to eat them out of sight of the seagulls.

Unlike Brighton, Margate on the Kent coast has sandy beaches. More than one, in fact. It’s become so popular with Londoners looking for a new, cheaper place to live that it has a kind of Hackney-on-Sea vibe. These days you’ll find spots like Cliffs, a coffee shop/yoga studio and barbershop all in one, pink-fronted vintage shop Peony Vintage and experimental arts venue Tom Thumb Theatre (imagine an old Vaudeville theatre as reimagined by David Lynch).

Aside from the hipsterfication of Margate, the soaring retro colours of the Dreamland amusement park, crazy golf and old school ice cream shops along the seafront keep a classic British promenade feel.

With its decent size and holiday atmosphere, Margate Main Sands is the most popular beach by far. But if you want a less crowded beach for a wander and swim, Westbrook Bay is the place to be. It’s a more secluded spot with space to admire the pretty beach huts and check out rock pools at low tide.

There are plenty of things to do and see close to the beach too. Turner Contemporary is a relatively new gallery. Open since 2011, it’s a bright airy space and the regular galleries are free to visit. The cobbled streets of Margate Old Town are pretty to amble through, and are filled with brilliantly-named shops and pubs like Handsome Freaks and The Lifeboat Ale and Cider House.

Round off a nautical wander with a trip to the Shell Grotto—Margate’s very own local mystery. The grotto is a 21 metre-long, subterranean winding passageway covered with mosaics made of over 4 million shells. Nobody is quite sure who built it or why. Age estimates range wildly between 200 and a rather fanciful 3,000 years old.

Margate has a decent and growing foodie scene. For fish and chips. Head to Peter’s Fish Factory, a family-run place in the Old Town if you’re looking for some classic seaside fayre. For Caribbean flavours, head to Mullins Brasserie, which is a modern European brasserie that uses Caribbean. Bajan chef-owner Antonio Forde has transformed old butchers into contemporary restaurants serving up dishes like creole fish stew, ital stew (vegan), and jerk chicken, with mains ranging from £11.00–£17.00.

One of the best spots for seafood is Angela’s of Margate, which has a changing menu based on what’s fresh off the boats that morning, but with dishes that include Dover Sole with green sauce and Monkfish bisque and mains between £20-25, it’s no surprise that it’s a Margate favourite.

At under an hour direct from the city on the (C2Sea) link, Leigh-on-Sea in Essex is one of the closest sandy beaches to central London. This laid-back town is quite a bit smaller and calmer than Brighton or Margate, more quaint than cool.

It’s a lovely place to spend a low-key, sunny Sunday away from the City. With an old town vibe and an historic centre, there are considerably fewer people around than at nearby southend on sea. Just on the edge of Old Leigh is the small but delightful Leigh-On-Sea Beach, with old fishing boats, fresh seafood and cute cockle sheds (little painted shacks).

If you fancy stretching your legs after lazing on the sand, you can stroll along the Leigh Heritage Trail, where you’ll find cinder paths, old houses with cliffside gardens, a metal obelisk and a yacht club (sailing is a big thing around here).

Stage 2 of the trail also includes the pubs, small galleries and cafés of Old Leigh, like Sara’s Tea Garden. Further along the trail, you’ll pass a bird reserve and the old ruins of Hadleigh Castle. Some of the trail is fairly steep though, so not one to attempt if you’ve only got sandals or flip-flops to walk in.

Food-wise, seafood is a big draw in Leigh-on-Sea. That said, places like The Oaktree serve up Mediterranean and Asian food with plenty of veggie, vegan and gluten-free options. Main courses will set you back around £12.00–£14.00.

Bexhill is charming coastal town with interesting architecture and a shingle (pebble) beach. The town centre is a haven for vintage fans, with independent shops and pop-up fairs. Bexhill-on-Sea even made it into the Guinness Book of World Records in 2017 for hosting the world’s largest Charleston dance.

One of the main draws is the 1930s, modernist De La Warr Pavilion. Re-opened in 2005, the building acts as a major arts and culture venue. During the day you can visit free exhibitions, or take a £5.00 architecture tour.

There are plenty of pre-1930s buildings around Bexhill old town, it’s full of old Georgian buildings, and you can also visit the ruins of an old 13th-century manor house.

If you fancy exploring a little further afield, take one of the cultural trails, to see more of the East Sussex coast. Hop on a local Line 98 bus (around 45 minutes) or split a cab (20 minutes) to Herstmonceux Castle. This beautiful 15th Century castle is surrounded by 300 acres of woodlands. Entrance to the grounds and gardens costs £8.00.

Restaurants in Bexhill tend to be of the traditional (Fish & chips) British seaside variety, but you can grab a savoury bite or a slice of cake at cafés like The Old Town Tea Room or lunch or dinner at The Sackville Bistro.

You’re pretty spoilt for choice along the Kent coast, with Margate, Whitstable, Ramsgate and Broadstairs all closeby if you’re thinking of getting away for longer than just a day – more on the last two later.

But if you’re not, Whitstable alone is a fine day out by the sea. Tankerton Beach at Whitstable is a pebble beach, so if it’s sand you’re after then Broadstairs only costs around £10.00 by train. It’s about 30 minutes away, so it’s possible to do both in a day. Broadstairs is more of a classic seaside, and Whitstable is its cooler, more artsy neighbour. Once you’re done paddling in the nippy Whitstable waters, head into sea-worthy locals like The Old Neptune (Or Neppy as it’s known around these parts). Here you can enjoy a locally-brewed pint from nearby Faversham, and watch the sunset.

You can also visit the pretty Whitsable Harbour, with its rows of pastel-coloured beach huts, arts and crafts market and small fishing boats. The Harbour is also home to a much larger boat, Greta, an historic sailing barge. Built in 1892 to transport cargo on the River Thames and the Thames Estuary, these days it’s mainly used for passenger trips. These can last about six hours, so it’s only worth it if you’re planning on spending a weekend by the sea.

Wander along to Harbour Street, the High Street and Oxford Street to explore independent shops, galleries and places to eat. You can get lost in rows of old books at Oxford Street Books, check out local artists at Fish Slab Gallery, peruse vintage treasures at Anchors Aweigh Vintage and get ice-cream from Sundae Sundae.

Seafood lovers should head to the seafront for Oysters (Oyster season is any month with an R in it) at places like The Forge beach shack. If you prefer a portion of fish and chips to fancy Oysters and Lobster on the seafront, there are plenty of traditional chippies to choose from like VC Jones on Harbour Street. For snacks and coffee, check out Blueprint Books & Coffee, locally sourced, healthy food from Gill’s Cafe and Delicatessen.

Broadstairs has that most elusive of coastal towns within easy reach of London: sandy beaches (seven of them!), and it’s filled with colourful beach huts and plenty of other British seaside favourites including crazy golf, and of course ice cream. We recommend Morelli’s Gelato, which has been serving up scoops since 1907.

For stunning sea views, head to the Viking Coastal trail which you can walk or cycle. It’s a 25 mile loop around the Isle of Thanet, but if you don’t fancy such a massive trek, it’s only 3.5 miles to Margate, with the pretty Botany Bay in the middle.

If you want to know a bit about local history, do the Broadstairs Town Trail self guided walk, which you can download or pick up a leaflet from the Visitor information kiosk. You can also find out why Charles Dickens loved the area so much at The Dickens House Museum, which was the inspiration for the character of Betsey Trotwood’s house in David Copperfield, entrance is only £3.50 too.

Another great feature of UK seaside towns in charity shops, so hit up the highstreet to peruse second hand books, clothes and records. The town also has great independent shops and galleries around Albion Street and Harbour Street.

When in Broadstairs, eat fish and chips (if you eat fish!). There are plenty of spots to choose from, including Fish & Chips co, which you buy from a hatch and eat on the beach. Broadstairs has some great pubs from the more traditional The Charles Dickens to the slightly more alternative The Chapel Bar and Bookshop.

While we do our best to ensure it’s correct, information is subject to change. Post first published in August, 2019. Last updated in June, 2022.