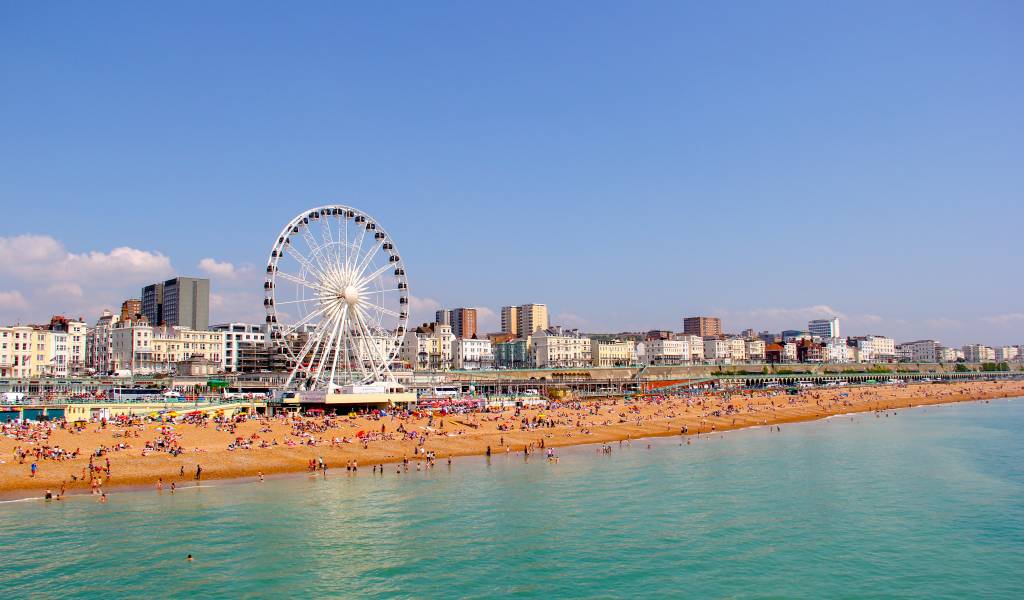 As great as London is, it’s good to get out every now and then—and this summer more than ever. Whether you’re looking to explore other parts of the UK on a visit, or you’re Londoner with itchy feet, there are plenty of places you can get to quickly and cheaply. We’ve rounded up some easy day trips from London that take less than 1.5 hours to reach because time is as precious as cash.

Buses travel between London and Oxford regularly every day, taking commuters and tourists to the ancient university city, and run late into the night so you can take your time. Plus, travelling by bus means you get to enter the city from the suburbs which include a house with a shark sculpture through its roof.

Suburban sharks aside, there’s plenty to see in the old city, from the famous Oxford University buildings, like Bodleian Library, the Bridge of Sighs and The Radcliffe Camera. Oxford is also known as the City of Dreaming Spires, thanks to its architecture.

Museums are free to visit. The Ashmolean Museum of Art and Archaeology will keep you busy for a while, but the real gem is Pitt Rivers. If you’re short on time, you can make this your ‘Pitt’ stop. General Pitt Rivers was an influential chap in the 19th century, and his collection of eclectic and eccentric objects from his worldly adventures is displayed in a gloriously chaotic way. Wander through the Oxford University Museum Natural History (OUMNH) to enter a world of shrunken heads, antique Blunderbusses (massive old guns), face masks, carvings and assorted musical instruments.

Once your feet a tired of pounding cobbled pavements, the city is full of proper old pubs for food and drinks. You can also can stock up on cheap, tasty food from the covered market and wander for a relaxed stroll in Port Meadow.

Getting there: Coach or train
Average journey time: 1 hr 7 mins
Cost: As little as £5.00. See here for coach and train tickets.

Although a town, rather than a city, it’s still worth a day trip. Windsor Castle is the largest and oldest occupied castle in the world and is still used as one of the Queen’s official residences. Although the entry fee is the princely sum of £23.50, sometimes there are 2-for-1 offers and ticket deals to be found.

The town itself is small but old and pretty. Wander over the Windsor and Eton bridge to view the castle from the other side of the River Thames, and for a slightly quieter, but still quaint and old English town vibe.

It gets extremely busy in summer, but it’s a nice place to spend a lazy Sunday, watching boats go by on the river, or taking a stroll up the long walk to visit The Copper Horse in Windsor Great Park. If it is sunny, then Savil Garden (which connects to the Great Park) is well worth a trip too, where you can explore 35 acres of hidden gardens, glades, and forest trails.

Getting there: Train from Waterloo or Padington to Windsor and Eton Central.
Average journey time: 41 minutes
Cost: From £11.10. See here for train tickets.

Whether or not you agree that the only way is Essex (TOWIE, for those unfamiliar with the TV show), Leigh-On-Sea is a cheap coastal getaway that’s less than an hour from London.

An old seaside town, with a proper sandy beach, just a few minutes walk from the train station where you can feast on fresh seafood and gelato.

For views and heritage, take the Leigh-on-Sea and Hadleigh Castle circular walk from the station up to the old castle ruins, stroll along the Benfleet Downs and Benfleet Creek.

Wander into Old Leigh, the pretty (and as the name suggests) old part of the town for old pubs, seafood and art and craft shops.

Getting there: Train from Fenchurch Street to Leigh-on-Sea
Journey time: 49 minutes
Cost: From £12.60. See here for train tickets.

A city by the sea, the beach may be pebbles rather than sand, but there are way more reasons to visit than just the sea.

Away from the bustle of the seafront, wander around the maze of side streets that is The Lanes, full of small independent shops and galleries. North Laine is home to the gigantic Snoopers Paradise, a space filled with vintage clothing, retro homeware and hand-crafted items, worth visiting whether you intend to shop or snoop.

The tourist checklist should include a visit to see The Royal Pavilion, a rather opulent, Regency-period building, influenced by Indian and Chinese architecture, worth seeing from the outside and it’s surrounded by large gardens.

Pre-covid, Brighton was a party town, so have a break mid-way and see the city lit up at night. When things are running as usual, the weekend tends to see the main streets awash with stag and hen dos (like central London), but there are plenty of alternative venues like performing arts centre Komedia and Hotel Pelirocco. If you’re staying out, be warned trains stop around 11 pm, but start again around 4 am and you can always kill time at Buddies 24-hour cafe bar.

Getting there: Train from Victoria, Blackfriars and London Bridge
Journey time: 1 hour 20 minutes
Cost: From £5.00. See here for train tickets.

This post was orginally published in April 2018. Last updated: March 2021.