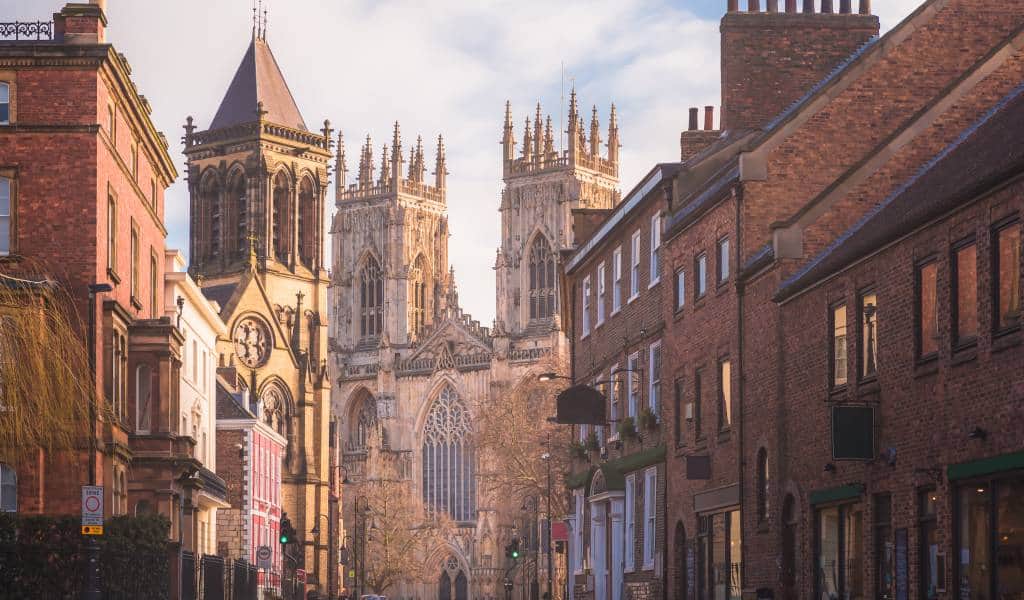 We know trains are great for European city breaks. But there are plenty of great destinations in the UK where you can easily escape to for a couple of days. Whether you’re looking for dreamy scenery, a city break or a coastal retreat – here are some of our favourite weekend trips from London by Train. All the destinations in this guide are within two to three hours of travel time from central London, and you won’t need a car at the other end.

One of the closest and easiest country retreats from London is Shere, between Guildford and Dorking in Surrey. Hop on a train from Waterloo, and just over an hour later you’ll be greeted by a picturesque, ‘chocolate box village. If it looks familiar, that’s because it’s the rom-com location capital of the UK, as featured in The Holiday, The Wedding Date, Four Weddings and Funeral and Bridget Jones: Edge of Reason.

But there’s more to Shere than romantic comedies, it’s a lovely place for going on long walks. The village is close to Surrey Hills, and you can take the Shere Trail, a 5KM heritage walk that takes in the village itself, a stroll through some fields and plenty of other pretty sights along the way.

While you’re there, you can also visit the Silent Pool Distillers to sample local gin, have lunch or afternoon tea at The Dabbling Duck café-bar or Hilly’s Tea Shop, and enjoy some post refreshments at old English pubs like The William Bray or The White Horse.

Where to Stay in Shere

As it’s a village, your options are limited to one of two BnBs. The Rookery Nook costs £145.00 per night for double occupancy or £135.00 per night over three nights), and £100.00 for single occupancy (reduced to £90.00 per for three nights or more). Rates are similar at Vaughns BnB and both look like cosy, delightful places to stay with lovely views. But, if you’re out of luck in the village itself and don’t need a room with a view, there are more budget options in nearby Guildford.

Getting there: Approx 1hr 15 mins
From Waterloo to Guildford (then No.32 bus) / Gomshall – 1 mile walk or short taxi ride.
From Victoria to Dorking, then No. 32 bus
Costs: From £24.00 (Off Peak open return to Gomshall)

If you want a UK city break, head north to Manchester for culture, food, exploring neighbourhoods and gigs. Manchester is not renowned for great weather, so pack a brolly, but there are interesting things to do all year round, although be warned: this is a big football city, so it might be worth checking if Manchester United or Manchester City are playing at home before you plan a trip.

Train fares are pricey if you go at short notice. (£98.10 for an off peak return). But there are a few hacks for getting cheaper tickets, including booking up to 12 weeks in advance. Once there, there’s plenty to explore, but a good place to start is the Northern Quarter. It’s one of the city’s coolest and most creative neighbourhoods, known for independent shops, cafés, street art, historic buildings and music venues. Once you’ve done wandering, grab a coffee from Ezra & Gil or stop for lunch at Mackie Mayor, a large food hall in a Victorian Grade II listed market. The area is great for live music too, with venues including Band on the Wall and Night and Day.

Culture wise, there are some great galleries and museums including The Lowry, which is situated in a former quay building near Salford, The Whitworth and The People’s History Museum. Manchester also has plenty of historic sights including the Science & Industry Museum if you want to find out more about the city’s industrial past. Manchester Art Gallery is free to visit too, as is Manchester Central Library.

And if architecture is your thing, you can also check out the beautiful, neo-gothic John Rylands Library, the Victorian Barton Arcade, and the newly-opened Mayfield Park — which is the first central park in the city for over 100 years. It’s a pretty walkable city, but if you need to use public transport, there are plenty of buses and trams if you’re going a little further out to areas like Salford.

Where to Stay in Manchester

Getting there: Approx 2 hrs 12 minutes
London Euston to Manchester Piccadilly
Costs: From £53.00 (advance fare, based on two single journeys)

For historic sights, cobbled streets and atmospheric city walks, head to York for the weekend. The ancient walled city was established by the Romans in AD71 and is the county town of Yorkshire. There are still Roman walls in York, as well as Viking remains, Tudor buildings and the largest Gothic cathedral in England. So you can find influences from centuries of British history within its walls.

One York’s most famous landmarks is York Minster, a 7th century cathedral (the word cathedral wasn’t used until the Norman Conquest in the 11th century). Head to the top of the central tower for panoramic views from the highest point in York. Other historic and cultural sights include Clifford’s Tower, JORVIK Viking Centre and Treasurers’ House, entry is around £10.00–£13.00 for each attraction.

Yorkshire Museum Gardens are beautiful to visit, especially during Spring and Autumn, they’re free to visit too if you fancy a wander through Roman ruins and seeing a 19th Century observatory. It’s also great just to spend time wandering through York, especially the medieval wall walk – which is a great way to get your bearings in the city centre too.

Food wise, there are plenty of decent spots from cheap eats to more fancy fayre including Botanist on Stonegate, Italian restaurant Delrios, cosy bistro Ate O’Clock. And if you’re looking for somewhere for traditional afternoon tea, pay a visit to Betty’s Tea Room, one of five cafés which are a Yorkshire institution. You’ll also find plenty of decent pubs too including the excellently-named The House of Trembling Madness, The Blue Bell, and Craft Beer Mansion

Accommodation wise, the [affliate id=”booking” link=”https://www.booking.com/hotel/gb/astor-york.en-gb.html” text=”Astor York”] is a great budget option, situated 15 minutes walk from the train station and close to the city centre. It’s a hostel, but private rooms all have en-suites and cost around £65.00 per night. Otherwise there is a good mix of chain hotels, BnBs and boutique hotels.

Getting there: Approx 2 hrs 15 minutes
London King’s Cross to York
Costs: From £43.00 (advance fare, based on two single journeys)

We’ve been enthused about the Kent coast as great places for beach day trips, and if you’re going for the weekend, you can easily base yourself in Margate, Ramsgate or Broadstairs with enough time to explore all three. Whitstable is also close by, but is much smaller, so it might be better to tack that on if you’re away for an extended weekend, or pop back for a day trip another time.

The East Kent coast is one of the closest and easiest weekend trips from London (aside from Brighton, but Kent has sandy beaches). Each of these towns has its own charm, and you can walk between all three either along the cliff tops or along the beaches at low tide — the total distance is around 10 miles.

If you’re looking for somewhere more lively, base yourself in Margate (dubbed Shoreditch-on-Sea) and explore the other places at your leisure. Margate has two main beaches, the retro theme park Dreamland and the Turner New Contemporary gallery. The Shell Grotto is Margate’s strangest attractions, and is home to over 4 million shells.

Although it has a beautiful harbour, one of the most interesting sights in Ramsgate is below ground. Ramsgate Tunnels is the UK’s largest civilian wartime network of tunnels, and you can take atmospheric tours which take around 1hr 20 minutes. It’s also just a nice town to pottter about in, checking out vintage finds in markets under arches, exploring pretty side streets and checking out the 19th Century Gothic Revival buildings designed by architect Augustus Pugin.

Broadstairs is perhaps the most old-school British seaside destination of the three and it’s got seven sandy beaches. As well as the beaches, you can also play mini golf, visit Charles Dickens House, and check out the independent galleries and shops around Harbour Street and Albion Street. Seaside towns are also home to excellent charity shops, so pop in for some second-hand bargains.

Both Ramsgate and Margate are decent foodie destinations. In Margate, restaurants range from classic seaside fare like fish and chips at Peter’s Fish Factory in the old town to contemporary places like Bajan-cuisine infused brasserie Mullins. Over in Ramsgate, foodie favourites include Indian restaurant Flavours by Kumar, Italian restaurant Il Tricolore and Kyoto Sushi.

Where to stay along the East Kent Coast

Accommodation in Margate, Broadstairs and Ramsgate is a mix of budget hotels, self-catering flats/air bnb, classic BnBs and boutique hotels. In Margate, the cheapest option is the Premier Inn (around £50.00 per nights) but if you’re looking for something a bit nicer, check in at the Crescent Victoria or Botany Bay hotel for around £80.00 per night)

But wherever you stay, you’ll be close to the seafronts and walking trails of any of the three towns.