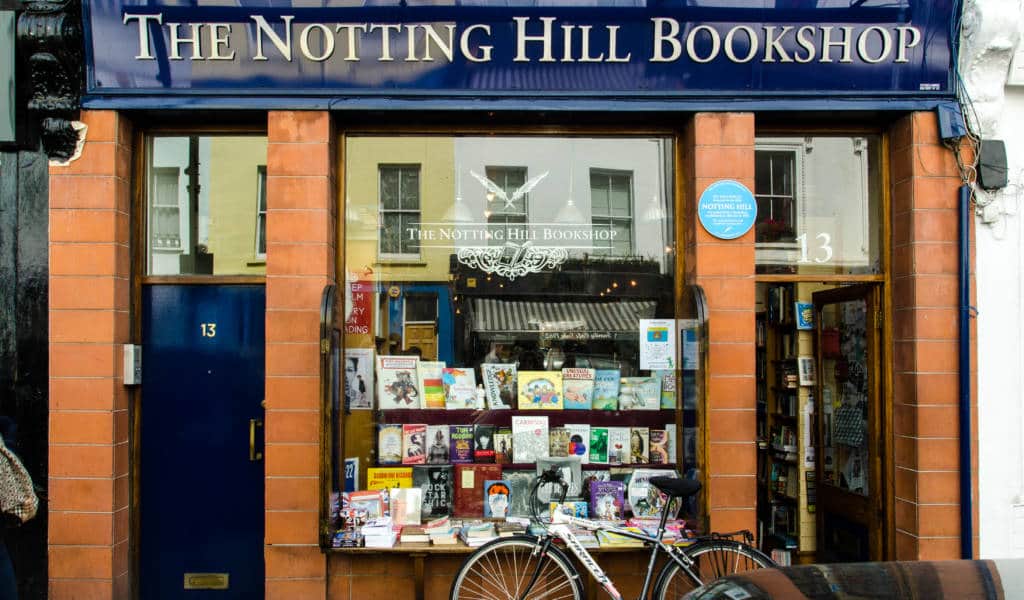 Paris may be the ‘city of love’ but London’s had its fair share of cinematic romance too. We’ll take you on a tour of Rom-coms in London, from the brief encounters and the missed connections to Hugh Grant’s hapless heartbreaks.

Sliding Doors isn’t the most well-loved British Romantic Comedy. But sketchy timelines and Gwyneth Paltrow’s wonky British accent aside, it does feature some lovely London locations. It tells the story of sacked PR exec (Paltrow) whose life is split into two possible future timelines through a chance encounter in the magical portal that is Embankment Station.

In one version of Helen’s life, she misses her underground train and the doors slide shut. In the other, she makes the tube and meets James (John Hannah).

The film opens with establishing shots of the River Thames, and the obvious starting point is Embankment. Get out on the Embankment Pier exit for a view of the Thames and the South Bank.

For more bridges and riverside walks, hop back on the Underground and take the District or Circle line westbound to Hammersmith. Head to the river (via Queen Caroline Street, just past the Apollo) to see Hammersmith Bridge and The Blue Anchor pub, which also feature.

Way over in east London is Fatboy’s Diner, where Helen and James have their first date. The American style diner isn’t worth a trip to East India Dock (DLR) alone. But it’s worth checking out as part of a visit to Trinity Buoy Wharf, home of London’s only Lighthouse.

We could probably do this article on Richard Curtis films alone. The director makes our fair city look prettier than a tourist brochure. One of London’s most colourful, and photogenic areas also lends its name to one of Curtis’ most famous films.

Realism isn’t really the point of Notting Hill. Even with late 90s house prices, it’s hard to believe that someone owns a split level period property in W11 by flogging old books. And floppy-haired posh boys don’t usually get to date film stars after accidentally chucking orange juice over them.

But this is fiction, and visiting some of its locations makes for a more than pleasant afternoon stroll. The film opens with Will (Hugh Grant) wandering down Portobello Road Market, which is open six days a week. The market area is also filled with independent shops and cafes, including Notting Hill Bookshop at 142 Portobello Road, which is the location of Will’s travel bookshop.

Over on Westbourne Park, 303 is the door where Will buys and then spills orange juice over
Anna (Julia Roberts). Alas it’s not actually a cafe, so there’s not much to see. But amble a few doors down to 280 and you’ll find the blue door to Will’s flat. The flat used to be owned by Richard Curtis.

Other locations include Rosmead Garden, on Rosmead Road, W11. It’s a private garden that Anna and Will sneak into at night. You can walk past it anytime, and it’s occasionally open to the public as part of Open Garden Squares weekend in June.

Another American playing-a-Brit, but Renee Zellwegger’s accent is pretty decent as the titular Bridget. This is first in a trilogy of rom-coms directed by Sharon Maguire. Bridget is a single thirtysomething working in media and documenting her adventures in love, sex, food and work in the pages of her diary.

The diary-worthy material involves, wining, dining and wandering around London. Her flat is above The Globe Pub in London Bridge, right opposite Borough Market, which is perfect for a day of wandering and eating. Take a stroll along Bankside and visit The Tate Modern. The restaurant is one of the many restaurants Bridget goes to with her tipsy pals.

You can also visit The ICA (Institute of Contemporary Art), along The Mall. This is where Bridget makes an awkward speech at the book launch for Kafka’s Motorbike, where you’re likely to have a better time than the guests at the literati party.