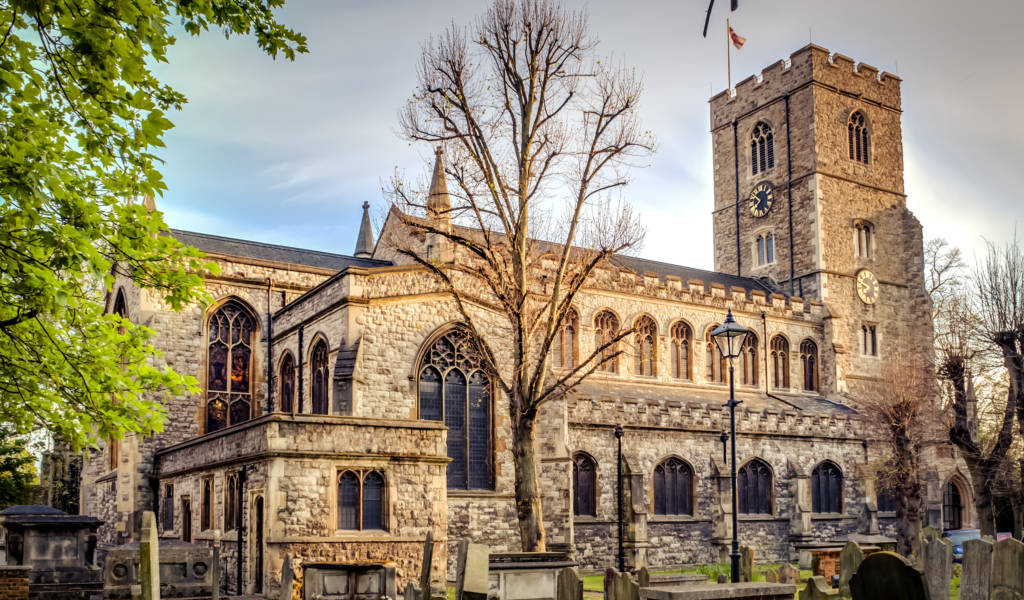 A Film Lover's Guide to London: Horror in the City

Ok, so a lot of British horror movies are filmed in studios and woodlands outside of the city. But a wealth of atmospheric, eerie and scary locations have put London horror on the map, with iconic films from the classic to the cult and contemporary.

We’ll help you pound the pavement in search of some cheap(o) thrills and venture where werewolves, creepy kids and serial killers dared to tread.

Warning: This article contains some spoilery details of famous scenes.

Alfred Hitchcock’s penultimate film is technically a thriller, but frankly what British horror is list is complete without a bit of Hitch? It was also the only one of his films to be given an ‘X’ rating. In the gloriously-hammy trailer, Hitchcock stands in one of the film’s locations, the fruit and veg market in Covent Garden. “Here’s the scene of another horrible murder”.

Hitchcock’s father William was a market trade. So the young Alfred spent time in that market, fascinated by the bustle in the stalls long before he was imagining bodies being stashed in bags of spuds.

Frenzy is all shot in and around Covent Garden where the police go looking for clues in a series of murders, on the trail of falsely-accused prime suspect Richard Blaney (Jon Finch). Fans of the Frenzy murder map can visit several locations in a single area.

The Globe Pub over on Bow Street is shut. But you can still visit traditional boozer Nell of Old Drury, directly opposite The Theatre Royal Drury Lane, which also features in the film. Take a brisk walk through the central Covent Garden Piazza as well as the market. While you’re there, wander past 3 Henrietta Street, which is the address of the actual necktie murderer, Robert Rusk. Just don’t try and go in, obvs.

Once you’re done in Covent Garden, head to the Thames for a bonus location. Take a short stroll down the Strand, over Hungerford bridge and then a little past the London Eye. You’ll reach County Hall along the river bank, which is featured in the film’s opening scenes.

Reeling from a Theatre awards snub, jaded Shakespearean actor Edward Lionheart (horror legend Vincent Price) takes the kind of gory revenge on critics that many thespians have probably dreamed of exacting after one too many scathing reviews, in Douglas Hickox’s Theatre of Blood.

After faking his own death, Lionheart dispatches his critics one by one, with a little inspiration from famous murders in Shakespeare plays. Putney Theatre has since been demolished and turned into housing units, but the murder trail leads to some interesting London locations.

The route is mainly around west London, including Digby Mansions by Hammersmith Bridge (also featured in the 1955 WWII drama The Man Who Never Was). There’s also the Peninsula Heights tower block on the Albert Embank. But for a bigger bit of set-piece action, head over to Kensal Green Cemetery, and the steps of All Souls Chapel for the setting of a particularly gruesome funeral scene.

Getting there: Kensal Green Station (Bakerloo and Overground lines).

Richard Donner’s supernatural horror sees the son of Satan himself, young Damien, wreaking unholy havoc everywhere. There are lots of locations just outside of London in Surrey too, if you fancy a trip out of town. But one particularly nasty scene involving crazed priest (and reformed Satanist) Father Brennan (Patrick Troughton) and a lightning rod takes place at All Saints Church, Fulham.

The church looks largely as it did in the horror classic, and still attracts Omen fans daily. It’s easy to see why Donner chose it for such a key scene. The Victorian church has a 96-foot tower, and you can also wander around Bishop’s Park, which features in the scene too.

Just before the church incident, Father Brennan meets with US Ambassador Thorne (Gregory Peck) to warn him about his son on nearby Putney Bridge. Needless to say, Thorne doesn’t heed the warning.

4. A hairy situation in An American Werewolf in London (1981)

A trip along the District Line or Piccadilly Line to Earl’s Court will take you to two locations. The first is the site of the former Princess Beatrice Maternity Hospital where David recovers (temporarily) from his wolf bite. It’s now the Princess Beatrice House homeless hostel on Finborough Road.

Later, when David can no longer contain the blood-lust of his werewolf form, he prowls around central London. You’ll recognise Tottenham Court Road Underground station, Piccadilly Circus, Trafalgar Square and London Zoo. You can easily tick those all off in an afternoon.

The final West End showdown is actually shot at Winchester Walk, Bermondsey SE1. But it’s kind of a dead end, in all senses of the word. So maybe leave that one unless you happen to be in the area.

Most commuters dream of waking up to silent streets. But for Jim (Cillian Murphy), waking up in a deserted hospital and abandoned streets is the start of a waking nightmare in Danny Boyle’s 28 Days Later. Set 28 days after a rage virus breaks out, Jim leaves St Thomas’ Hospital and crosses the Westminster Bridge. It’s an opening sequence that sets us up nicely for a bleak and eerie tour of several London landmarks.

You’ll have to get up pretty early in the morning to recreate Jim’s bleary-eyed, lonely walk through the city (and to take photos with views that aren’t obscured by crowds). Continue through Westminster on Parliament Street to see Big Ben and the Houses of Parliament before ending up at Horse Guards Parade, just off Whitehall. Carry on up the Mall for a pleasant stroll past St James’ Park. You’ll hit Duke of York steps where Jim finds money lying about. Although it’s not worth anything in the middle of a rage epidemic.

The action moves east and south after the Mall in the film. But for the purpose of this walk, we’ll stick to the West End. After that detour, Jim ends at the Shaftesbury Monument Memorial Fountain, covered in missing persons posters. But you’re more likely to find group selfies, street performers and pigeon poo.

Getting there: Westminster Underground (Circle, District and Jubilee lines).

While we do our best to ensure it’s correct, information is subject to change. Post first published in October, 2019. Last updated October, 2020.