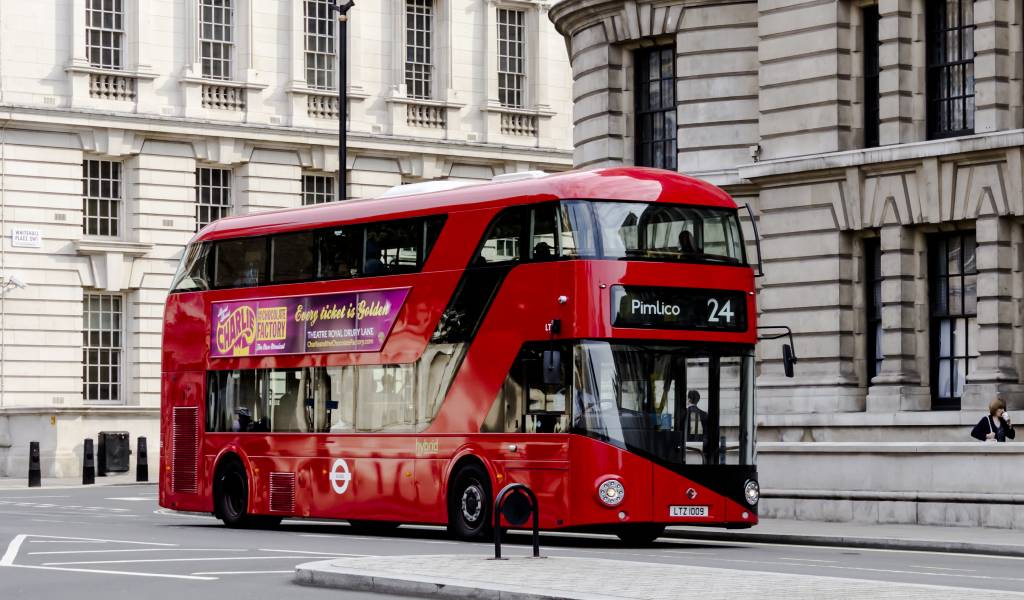 We love London buses around here. The £1.65 hopper fare lets you make unlimited bus journeys made within an hour of tapping. But travelling by bus isn’t just great for cheapo-travel. It’s also one of the best ways of sightseeing in the city. Many of the city’s bus routes offer the chance to get great views of major landmarks.

So, rather than pay for a tourist-trap, open-top bus tour – grab your Oyster card or contactless payment and read our guide to London sightseeing by bus for nature, architecture and historical landmarks. If you want a bit of background and commentary while you travel, you can download a London Public Buses Audio tour from Viator for £6.50

Travel southwest to east (or vice versa), ideally skipping the Fulham-Victoria bit if you’re pushed for time. Starting at Victoria will get you into some prime sightseeing territory.

Hop on at Victoria Station/Grosvenor Gardens (Stop S) and take a top-deck tour through Westminster.  Make sure to nab a window seat to get the best view of Parliament Square, The Houses of Parliament, Horse Guards Parade, Westminster Cathedral and Big Ben.

After Westminster comes Whitehall and Trafalgar Square, enjoy the vantage point of seeing one of London’s busiest public areas from up high. Then wave goodbye the National Gallery and National Portrait Gallery as you head for your next area: Aldwych.

Aldwych is home to The famous Strand Station, one of London’s 27 defunct Underground stations and the impressive, Gothic architecture of The Royal Courts of Justice. Now you’re on infamous Fleet Street, a former hub of the British Newspaper industry, the birthplace of 17th Century diarist Samuel Pepys and the scene of the murderous antics of fictional villain Sweeney Todd.

Moving away from Fleet Street is St Paul’s and this is also where can The Royal Exchange – Bank of England (one of the oldest in the world).

History and modernity merge as you drive closer to the City of London. The final destination is Liverpool Street, but don’t let the suits and harassed commuters put you off—take a wander to Spitalfields and the buzz of Brick Lane.

The Culture and Heritage route: Bus No. 9 (Aldwych to Hammersmith)

The number 9 from Aldwych to Hammersmith is one of the oldest bus routes in London. And at five miles, it’s also one of the shortest. But, there’s plenty to see in that stretch, so hop on at the charmingly-named Aldwych Bus House (Stop H), perhaps once you’re done with Number 11, and you’ll be greeted by London landmark Somerset House. From there, the bus will head down the Strand to Trafalgar Square, and you should spot Hyde Park and Green Park as you pass along Piccadilly too.

This route takes you through some of London’s poshest areas, including Knightsbridge. But if Mayfair excess and Harrods aren’t your bag – Kensington Gardens and Holland Park are some beautiful green spaces that are worth seeing. Keep a look out for Green Parakeets circling above too. You’ll end up in Hammersmith, and while King Street isn’t particularly exciting, the rooftop at the Lyric and the pubs along the riverside are great on sunny days.

This one is a fairly long route, taking just over an hour (excluding rush hour). But, the middle section goes through Westminster so if you’re seeing sights there on the Number 11, you might want to make use of the hopper fare, and just do parts of the route.

Pimlico is a rather fancy neighbourhood, and it’s also home to the Tate Britain, which is free to visit – so it’s worth popping in before you hop on the 24. And if you’re there around lunchtime, visit the legendary Regency Café round the corner.

Once you’ve seen all you want to see in Pimlico, hop on the 24 at St George’s Square /Pimlico Station (Stop F) and head to the upper deck to look over Victoria, Westminster Abbey and Parliament Square. The middle section will take you through central London/the West End including Cambridge Circus, Denmark Street and Tottenham Court Road.

From there, it’s onwards to Camden, and then once you get past the bustle of the high street, the bus will probably empty out a bit. The final stretch becomes more leafy as you make your way through the streets of Kentish Town and Gospel Oak before getting off at The Royal Free Hospital (Stop Z), where you can grab a cuppa and make your way for an afternoon stroll on Hampstead Heath.

Waterloo is another great area to explore for sightseeing and things to do from strolling along the South Bank where you’ll see landmarks including The National Theatre, BFI Southbank, and The Royal Festival Hall. So, depending on what you want to do when you get off the bus, it might be worth starting your journey from the opposite direction, getting on at St John’s Wood Road/Lord’s Cricket Ground (Stop H).

But, if you start in Waterloo, you can hop on Waterloo Bridge (Stop P) for lovely views as you cross the river. You’ll pass through The Strand, where you’ll see The Savoy, and then travel up Regent Street and Oxford Street which is great for people watching, otherwise it’s mostly department stores.

Once you’re past the main shopping areas, you’ll pass along the leafier streets around Baker Street, close to Regent’s Park and then on to St John’s Wood where you can see Lord’s Cricket Ground and take a photo at Abbey Road (and, yes, walk that famous zebra crossing like the Beatles too).

Central London to the City of London: Bus No. 8

Head east from the centre of town with great views of the City of London as you go. The full route goes all the way from St Giles High Street (Stop W, near Tottenham Court Road) to Bow Church, beyond Bethnal Green. But the most interesting stretch for bus sightseeing and ground level exploration is between St Giles in the West End to Brick Lane, which takes around 45 minutes, depending on London traffic.

What makes this route so interesting is the variety of things to see along the way. Starting on the edge of Theatreland, you’ll make your way down High Holborn towards Fetter Lane, which is part of London’s legal district (the area is home to some famous Inns of Court), after Holborn Circus, pass St Paul’s Cathedral before heading through Bank and the City of London.

From there, you’ll pass the financial district around Liverpool Street and make your way through Shoreditch. You can get off at either Shoreditch High Street or Brick Lane, as they’re round the corner from each other, from there there’s plenty to see and do including checking our street art at pavement level, browsing in second-hand and vintage clothes shops,or grabbing a legendary Brick Lane Bagel.

Got a sightseeing head for heights? Read our article on cheap and free views of London.

This article was first published in September 2018 and updated October 2022.