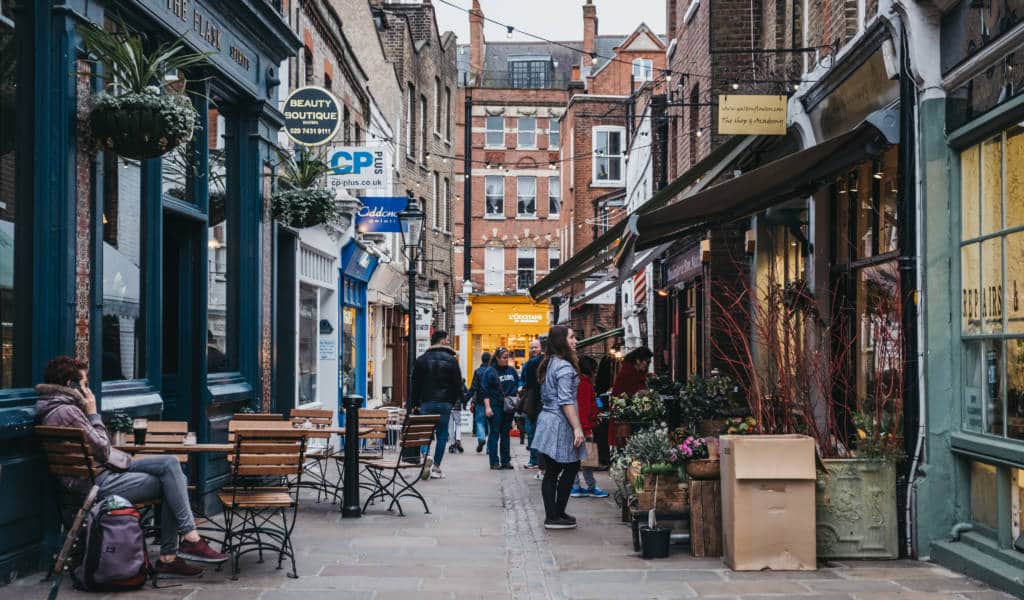 Ten Free and Cheap Things to Do in Hampstead

Hampstead is famous for its heath, notable residents past and present and on the whole being a very spendy part of town. But there are plenty of free and cheap things to do in Hampstead. Here’s ten reasons to enjoy this corner of north-west London:

No visit to the area is complete without spending time at Hampstead Heath, one of London’s best loved green spaces. The heath is a 791-acre swathe of woodland, tall grass, large playing fields and swimming ponds.

You could spend the best part of day here with so many different areas to explore. There’s Kenwood House on the Highgate Side and panoramic city views with picnic spots at Parliament Hill Fields. And then there’s the exotic looking Pergola, a Georgian Arbour overlooking the West Heath, which does a pretty good impression of the canopies and walkways of Tuscany on a sunny day.

Hardy swimmers take to the waters all year round in Hampstead Heath’s three swimming ponds. There’s the Ladies’ Pond, the Men’s Pond’ and Mixed Pond. Not to mention Parliament Hill Lido, which is always busy on hot days. For more outdoor spots to take a dip, be sure to check our guide to active adventures in London.

2. Walk down pretty side streets and pathways

Hampstead High Street is always nice for a wander, but it has several little walkways and side streets tucked away. Perfect for exploring and discovering hidden gems and interesting architecture.

One of the most famous is Flask Walk, which is lined with cute cafes. There’s plenty of shops along the pedestrianised section, and fancy houses with colourful front doors further down. It connects the High Street with the more residential, villagey parts.

If you head down to the end of Flask Walk and turn left, you’ll find New End Square. Here you’ll find Burgh House & Hampstead Museum, which is free to visit. Check out the pretty, suntrap garden if you want somewhere to stop for a scenic cuppa and a scone.

Head to Back Lane to turn into Streatley Place or Mansfield Place which are leafy walkways, and visit Holly Walk for another delightful detour past picturesque cottages and whitewashed houses. Admiral’s Walk is (aptly) home to the nautical-themed Admiral’s House. You can’t miss it in white and blue, replete with old ship’s features. It was also apparently the inspiration for Admiral Boom’s house in Mary Poppins.

Founder of psychoanalysis, Sigmund Freud came to the UK after his family were forced to flee the Nazi occupation of Austria in 1938. His final residence in Hampstead is now a museum. So you can take wander through his study, peek at his extensive library, look at his famous psychoanalytic couch and see the portrait Salvador Dali did of him when he popped by for a visit.

If you go on the first Sunday of the month, admission includes a free guided tour, on which you can find out more about the objects in Freud’s collection. His daughter Anna Freud also went on to become a pioneer of child psychoanalysis. So you can imagine some of the intellectual father-daughter exchanges that took place round the Freud gaff while you’re there too.

4. Eat a crepe at La Crêperie

French pancakes sell faster than hot cakes in NW3. People (including celebrity customers Kate Moss and Harry Styles) queue in long lines at this teeny street stand which has been a Hampstead staple since the early 80s. It’s had a lot of TV and press attention, so get in early if you want to get your mitts on a sweet crêpe or a savoury galette. Whether they’re worth the hype or the wait is for you to decide, but they might be good walking fuel if you’re hitting the heath.

Hampstead is a neighbourhood for cosy, old pubs rather than trendy bars. But if you’re looking for a post-walk pint, somewhere to sit by an open fire in winter or go for Sunday lunch, you’re fairly spoilt for choice.

One of the closest to the heath is the historic Spaniard’s Inn, which has been serving pints since the 16th century. The likes of Keats and Dickens are among its most famous patrons. Inside it’s all dark wood interiors and roaring fires. And there is a large beer garden at the back which gets pretty busy during the summer.

If you’re checking out side streets, pop into The Flask on Flask Walk, which is old-fashioned London boozer with frosted glass, booths and fireplaces, bustling with locals and visitors. Like Spaniards In, it’s is also a Grade II listed building. Though these days it’s run by Young’s brewery and serves up a mix of pub-grub and gastro-pub food. A main course will set you back around £15.00.

If you’re close to Hampstead Heath station, head to The Roebuck on Pond Street, it’s also historic with cosy fires, armchairs and an old piano. In the winter, it’s all about hearty fare like their signature pies or a Sunday roast. In the summer, it has a large, pretty beer garden, a pergola and a barbeque.

Others to check out on the cosy, old pub crawl are The Wells Tavern which is a gastro-pub in an old Georgian house, and The Holly Bush where you can get anything from a Ploughman’s to a Lentil curry.

Hampstead has many interesting former residents and places. So many, in fact, that local, Ralph Wade, set up The Hampstead Plaque Fund. These plaques commemorate those who didn’t (yet) qualify for an official English Heritage blue plaque.

The official blue plaques are round, but look out for almond-shaped black and navy blue plaques. The one above is for a former lockup—where prisoners were kept in terrible conditions to see what (possibly worse) fate awaited them. You’ll also see the likes of authors Daphne Du Maurier and Robert Louis Stevenson, artist Mark Gertler and social reformer Marie Stopes. And if you want to see some of the blue plaques, check out this interactive map.

Most residences don’t have a sign post to help you find them, but 2 Willow Road is no ordinary address. It’s a modernist home made up of three, three storey concrete houses, designed in the 1930s by the architect Ernö Goldfinger which contrasts with the Georgian architecture that surrounds it.

It didn’t make him popular with some of the snooty locals at the time, but now the property is a celebrated building, run by the National Trust and open to visitors.

Pop in to see modernist architecture and design and the Goldfinger family art collection which includes works by Delaunay, Max Ernst, Man Ray and Bridget Riley.

8. Grab a coffee from a Red Telephone Box

Red Telephone boxes are a London throwback and an increasingly rare sight these days. But the family behind Kape Barako (a local coffee shop) were such fans that they decided to use one as kiosk to serve up coffee and pastries from. The small but perfectly formed kiosk also serves cakes from Bread Factory in Hendon, milkshakes and even soup.

When he wasn’t spotted in the inns NW3, celebrated romantic poet John Keats wrote his poems here. His former Regency home, where he penned famous poems like ’Ode to a Nightingale’ is now a museum and literary centre.

Pop along to discover more about his life and works, look at original manuscripts and find out about what and who inspired his poetry. Plus, you get to nosey around a big, grand old house too. You have to pay to enter the museum, but the garden is free to visit.

The Hampstead Antique and Craft Emporium has been running since 1967. It’s tucked down a little walkway off Heath Street, and it’s filled with around 25 stalls selling antiques, vintage jewellery, artworks, miniatures and handmade items

Prices vary, as you might expect, but it’s a friendly place to pop in and chat to stallholders and peruse curios. Stop for a cuppa and a waffle at Tania’s while you’re there too.