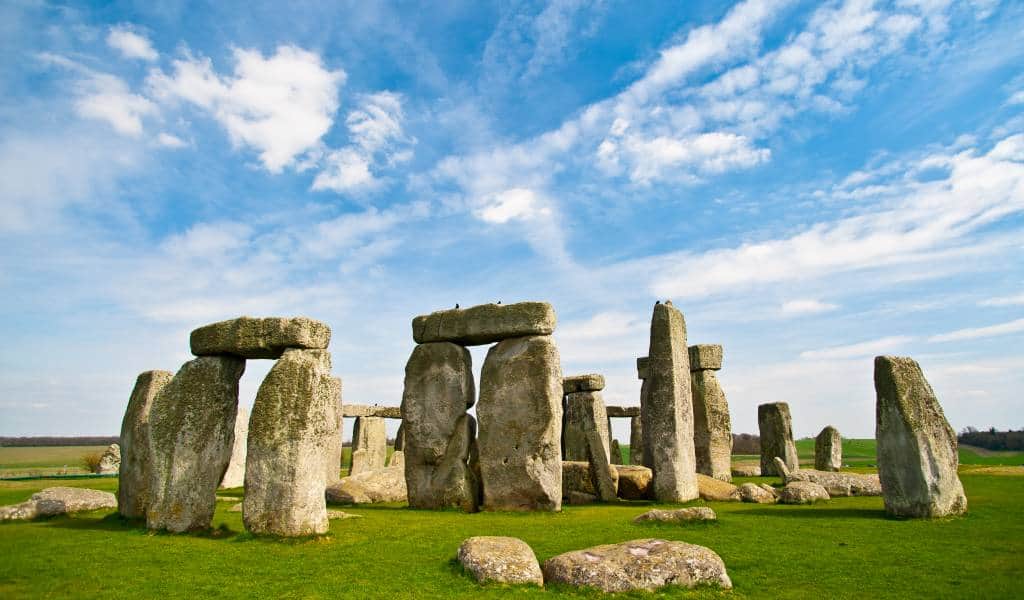 London to Stonehenge: From Metropolis to Mystery

Druid temple, ancient cemetery or alien landing site (depending on who you ask), Stonehenge is one of the UK’s prime historical sites.

Located amidst the rolling hills of Wiltshire (2.5 hours from central London), it draws visitors by the coach load, with its uncertain purpose adding to the wonder. Whether you’re visiting the UK or have decided to explore the sights a little closer to home while travel’s out, a trip to Stonehenge is a great chance to see an iconic landmark.

Stonehenge: A long and mysterious history

Stonehenge dates back to prehistoric times, and it’s purpose is still unknown. Thanks to archaeologists, though, we do know quite a bit about its construction. The circle was built in six stages between 3000 and 1520 BCE, when the Neolithic period was transitioning into the Bronze Age. The site has been significant since 8000 BCE, however, with wooden monuments built nearby by the Mesolithic and Neolithic people.

The most intriguing factors of Stonehenge are the artificially shaped sarsen stones and the use of bluestones, which were brought from South Wales, over 100 miles away. The positioning of the stones is known as post and lintel, meaning two upright stones with a third balanced across their tops. There are many barrows surrounding the circle, which are burial mounds containing ashes and remains, making it the largest known cemetery from the 3rd millenium BCE in the UK.

Archaelogical digs have taken place here for centuries, be it looking for treasure or studying earthworms, with the first serious dig taking place at the start of the 20th century. Developments in technology like carbon dating have increased the understanding of the area’s significance, discovering the burial mounds and construction holes.

What does it all mean?

The elements of the circle design do give some hints as to its possible purposes, fuelling centuries of often wild speculation. The close burial sites of chieftans, priests and aristocrats suggest it was religiously significant and a show of power, or it may have been dedicated to the ancestors. While it is broadly agreed to have religious significance, it is also has practical elements. The stones are aligned to the sun and could have been used to work out agricultural calendars.

Many theories from the 17th century onwards suggest it is a druid temple. Although recent scholars have generally disproved as the site predates druids by thousands of years, it is still a popular place for druids to visit—especially to mark the summer solstice. More recent theories focus on computer-like calendar uses, while an early Bronze Age skeleton found nearby with a broken knee lead experts to think it could have been a place of healing, although there is little other evidence to support this.

Visiting Stonehenge: What to do

While looking at the stones is great, you’ll be glad to know that there’s a litte more to do once you get to this UNESCO World Heritage Site.

Housing an impressive exhibition, the visitor centre uses historic artefacts loaned from local museums and modern technology to showcase the amazing presence of Stonehenge. Enjoy 360° audio-visual tours through the seasons, admire excavated jewellery and remains, and step into Neolithic houses to experience the 4,500 years of history that separate us and the beginnings of Stonehenge.

Stepping into the Stone Circle

Now, before you get too excited, for regular ticket holders Stonehenge is a look-and-don’t-touch kind of sightseeing experience. These rocks are old, and having every Tom, Dick and Harry stroking them and climbing them would not be great, so most of us will have to remain at a safe distance to admire them.

If you really want to get up close to them, you can book one of the Stone Circle Access tickets, which are limited and pricey, but allow that inner-circle experience. These tickets allow access outside of regular visiting hours, so it’s between 5 am and 9 am and then 8 pm and 9 pm during summer, for example. There are only 30 tickets per 1-hour timeslot, so you have to plan ahead. Tickets cost £47.00 for adults, £28.20 for children, with carers and toddlers going free. There are no concession tickets, but reductions of £9.00 for adults and £5.00 for children are available for English heritage members.

Winter and summer solstice at Stonehenge

Thanks to its somewhat erroneous connections to druids, the stone circle is a popular place for modern-day druids. Summer solstice is a massive event in the calendar, with hundreds of people gathering to watch the sun rise behind the Heel Stone for free. The chillier winter solstice sees crowds gather to watch the sun set to the southwest.

Whether you’re determined to make it yourself or are happy to jump on a bus for the ease of it, there are options for seeing the stones.

A DIY day trip to Stonehenge

It is possible to visit Stonehenge from London under your own steam. You can catch one of the South Western sevices to Salisbury, taking two hours and costing around £45.00 off-peak return, with cheaper tickets available if you book in advance. From Salisbury you can catch a bus to the site, taking around 20 minutes. They run quite infrequently, so do plan in advance—use the Wiltshire transport planner for schedules.

Stonehenge is a bit of a trek, so if you prefer to nap on a bus, the arranged coach tours are a great option. Klook has an express half-day tour which is not currently available, but is expected to return soon. You can squeeze it into a half day, but if you’re going all that way it makes sense to combine it with some other nearby sites.

Combined day trips with Oxford, Bath and beyond

Given the time it takes to reach Stonehenge from London, it makes a lot of sense to visit other popular spots in the vicinity as well. Nearby cities include Salisbury (worth a trip just for the cathedral, and also has copies of the Magna Carta from 1215) and Bath, which is home to the eponymous Roman baths. Windsor Castle is also close-ish, and is the oldest and largest occupied castle in the world, with expansive grounds and incredible stately rooms. Klook have some great day trip options:

Getting to Stonehenge: Everything but aliens

If you’re keen to make your own way to Stonehenge, you can drive from London, with the site signposted from the A303 off the A360 The drive takes 2–3 hours from London, depending on where you start out. There is parking with a visitor bus running every 10 minutes to the site.

On public transport, you can take public buses from Salisbury to the stones, taking around 25 minutes. These run hourly from 10 am to 2 pm, so be sure to plan in advance—you can use the Wiltshire transport planner.

Given the limited times for public transport, if you’re a non-driver, it’s a good idea to consider the organised bus tours from London, as they are a convenient way to get to Stonehenge and to see other nearby sites.

These famous stones pose more questions than they answer, like Who built them?, How did they move them?, and Do I need to book in advance? We aren’t so sure about the first two (aliens, maybe?), but we for sure know the last one (also aliens—just kidding, the answer is yes).

Stonehenge is located in Wiltshire, near Salisbury and is a 2–3 hour drive from London. It’s in the South of England, prime rolling hills and green pastures territory. While this means it’s beautiful, it also means that access is not very convenient without organised tours or a car, but it’s certainly doable if you plan!

How much is a ticket to Stonehenge?

Tickets are available in three forms: peak, standard and off peak, based on when you visit Stonehenge. This mainy revolves around school holidays and weekends, with term-time weekdays being the cheapest (£19.50 for adults and £11.70 for children) and school holiday weekends being the most expensive (£22.80 for adults and £13.70 for children. You can buy your tickets online for the price of £19.90, which generally doesn’t fluctuate based on peak times.

There is also an option to add a donation of a pound or two to your ticket, going to English Heritage, which is the charity taking care of sites like Stonehenge across the country—they’re making plenty though, so don’t feel pressured.

Can you see Stonehenge for free?

Yes. If you want to see the stones from a distance you can see it from the free car park at Woodhenge, with a public footpath running running just outside the paid grounds. You can follow the ususal directions to the car park, and from there, walk 15 minutes along the gravel path towards Stonehenge. At the drop-off bus stop for the visitor center there’s a wooden gate marked ‘Permissive Path for Pedestrians and Cyclists’—take this route and you’ll see the stones for free (just ignore the fence!).

If you are a local resident (with a pass), member of English Heritage or the National Trust you can enter for free, but you do still need to book due to limited numbers. You can also enter the site on June 20th each year for summer sostice and sit among the stones—busy but worth it!

Do you have to book for Stonehenge?

Due to Covid restrictions, you must book for tickets to visit Stonehenge, even if you are entitled to free entry with local resident pass, National Trust or English Heritage Pass. The bookings can be made online for a specfic time slot, with last entry 2 hours before closing time.

Can you walk among the stones of Stonehenge?

Regular entry to see the momuments means you can only see them from a little way back, but there are options if you want to stand in the stone circle. You can book the Stone Circle Access (mentioned above), which runs outside regular opening hours, or you can get free entry for the special solstice events.