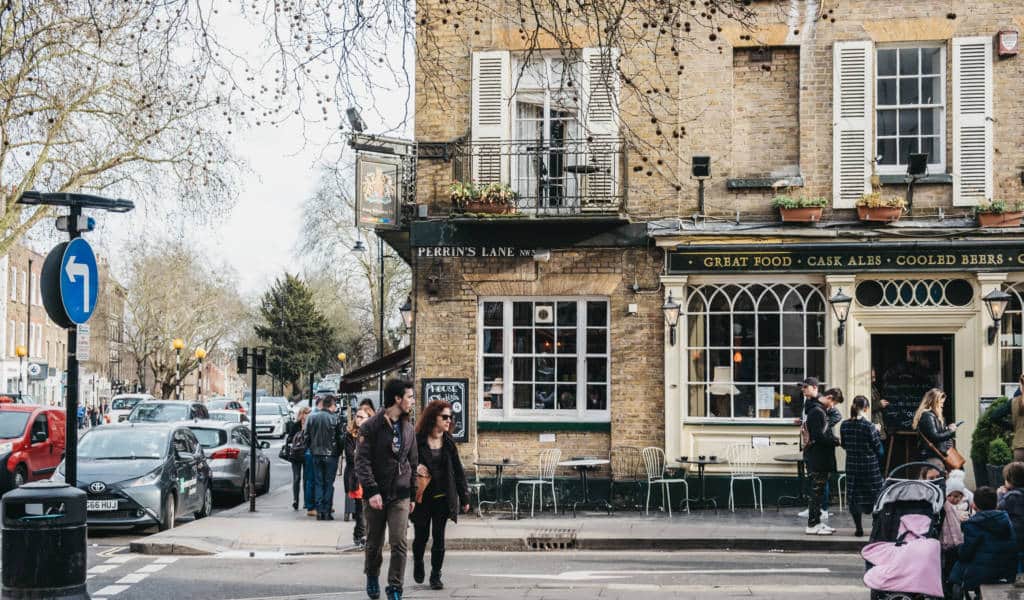 There’s no shortage of interesting and weird walking tours to do in London, but sometimes you just want to take off and be your own tour guide. Luckily, as well as the many guided tours available, there are plenty of self-guided tours and trails you can do at any time, no booking required. From pretty riverside ambles, to cultural and historic trails, and tours by bus – here’s a roundup of self-guided walking tours in London for curious, solo wanderers or groups. You can do them at your own pace, with most tours taking around 90 minutes to 2 hours to complete.

One of the bigger walking tour companies is Free Tour on Foot, which operates in cities all over the world, not just London. As well as a busy schedule of guided tours, it also offers over 20 self-guided tours including food tours around Soho, Borough Market, east London and Exmouth Market. You can also download GPS audio tours to listen to on walks or on bus tours, and go on specific themed works that range from Roman London to James Bond film locations.

With the excellent tagline ‘stories that move you’, Voice Map is another multi-city independent tour company that creates gps and audio walks, cycle tours, drives and even boat rides. They’re fully immersive with very high production values, so you can wander around Theatreland with the soothing tones of Sir Ian McKellan in your ears. Not all the guides are quite so famous, but they’re all very engaging storytellers and the variety of tours on offer is really interesting too.

They range from historic and literary tours like Charles Dickens’ London and The City through the Centuries to more obscure and unusual tours like At Your Convenience – a 40 minute guided tour of London’s public loos (and the nicer, more interesting sights that connect them).

Many tours are free to download, while others charge a small fee (between £3.00–£4.70) and will work offline too, so you don’t have to worry about rinsing your data or phone battery.

A Lady in London

The Lady in question is travel writer Julie Falconer, a Californian living in London. She has spent years walking around the city and sharing her discoveries on her blog. The A Lady in London site has a blog post of 31 self-guided tours including short, scenic, routes like the Thames Path from Hammersmith to Chiswick, Hampstead Village as well as themed trails like The Literary London Walk with info and maps for each one.

All the walks and bus tours offered by London For Free are self-guided. They’re not completely free, although they are very cheap, you can download all the tour itineraries and maps in one PDF booklet for £3.50 Taking the bus is a great option for people with accessibility needs, or just a leisurely way to experience London sightseeing and includes the 343 on Tower Bridge heading south and the 139 from Waterloo to Piccadilly Circus. Walks include some of London’s Bridges, a nautical tour of Greenwich and a Riverside Pubs Walk. There is no audio option on these tours, and the PDF maps make it a little bit old-school, but there’s plenty of variety and interesting routes to choose from.

You can download free PDFs for self-guided cultural, historic, architectural and nature self walks and trails and seems to add more reasonably frequently. Download the Exploremore app to find some of the secrets and hidden gems of the City of London.

Self guided tours include the ambitious 10 Centuries in 1 Day tour which is a good one for groups and families and can be done on foot or by bike, taking you to historic sites including the Roman Wall and Tower of London. Other tours include The City of London Tree Trail, Design of the Times where you can see the historic and modern architecture and follow the Bard’s old stomping grounds on the Shakespeare’s London tour.

Tip: While you’re exploring the city of london, keep an eye out for the public art trail in Broadgate

This one offers a lot of the classic walking routes with sightseeing walks along the South Bank and City of London, but there’s also a choose your own adventure option aka the ‘Create Your Own Walking Tour’. Download the app and use the customisable route as an easy map tool. From there, you can choose between landmarks and attractions and figure out the best way to get there with a maximum of 15 attractions per walk which could include well known landmarks and smaller places, so you can take yourself from The Beatles Store to Abbey Road Studios and Crosswalk and see a few other landmarks along the way.

London is full of blue plaques on buildings indicating where some of its most celebrated residents lived and worked including Sylvia Pankhusrst and Jimi Hendrix. Navigating your way around them is easiest with the Blue Plaques app (iOS and Android) from English Heritage.

The app has two self-guided tours, the Soho Creatives and Visionaries tour takes around 45 minutes and includes 12 plaques around the area. The other is Literary Kensington, which also has 12 plaques but takes around 90 minutes to complete. You can also use the app to search for particular people you want to find, or explore the different blue plaques by area.