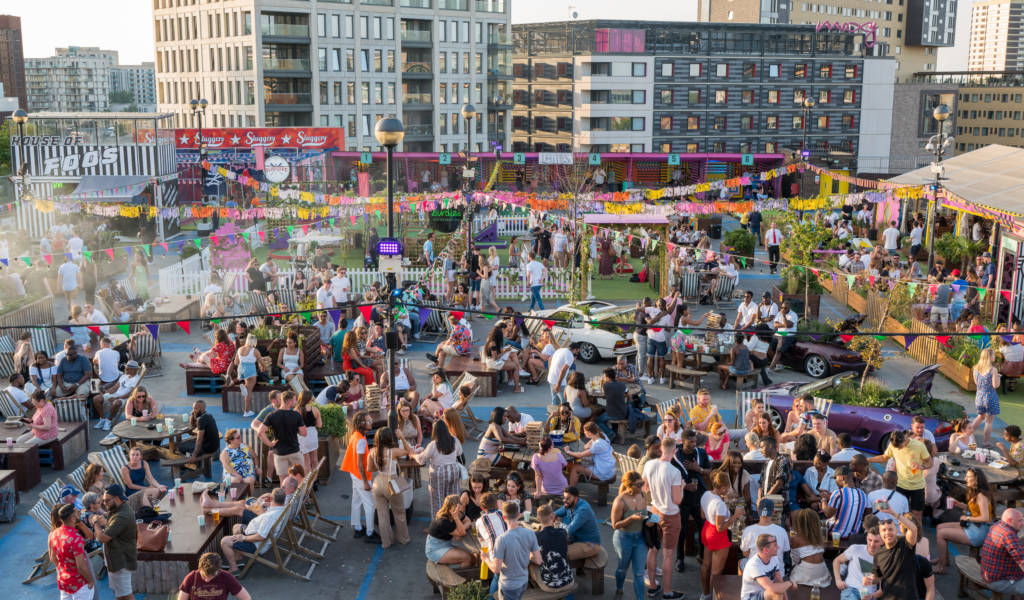 Twelve Free and Cheap Things to Do in Stratford

Stratford has undergone a huge regeneration in the past few years, largely due to being the home of the London 2012 Olympic and Paralympic Games. From checking out the legacy of post 2012 facilities to culture and open spaces, here’s our pick of ten free and cheap things to do in Stratford.

Walk, run, cycle or swim at the Olympic Park

Queen Elizabeth Olympic Park was the home of the London 2012 Olympic and Paralympic Games. Since then, visitors and residents alike come to Stratford’s largest park in high numbers. And there are plenty of things to do there. It’s absolutely huge, covering 560 acres (that’s roughly 300 football pitches) of land.

Want to take things at a leisurely pace? Walk around the vast green spaces like the meadows, stroll through tree-lined promenades, and enjoy the colourful wildflowers. You can also check out Olympic landmarks like the Stadium, The Velodrome, The Aquatics Centre and The Copper Box Arena.

But if you’re feeling more active or sporty, then take advantage of Olympic-grade facilities at a decent price. A fiver will get you a swimming session at The Aquatics Centre. It’ll also cover a pay and ride session on the ride circuit at The VeloPark (£12.00 if for bike and helmet hire). And if you’re more of a runner, just take your pick of one of the many running routes all over the park. Check our our guide for more active thrills around London.

Take a boat tour along the Lee

The River Lee runs through the Olympic Park. Boat company Lee & Stort runs both 45-minute and two-hour guided river cruises from April until early October each year. Boats are available for private hire all year round.

The shorter 45-minute tours run at weekends, and you can just turn up and book at the park. The extended tours take in the iconic Olympic venues, as well as the landmark ArcelorMittal Orbit, through Carpenter’s Road Lock, Lee Navigation and St Thomas’ Creek.

The shorter tour is a nice way to see the park from the water at a leisurely pace. And you can even bring your dog!

Roof East is a bar, event space, open-air cinema and community space. It’s open from April through until just before Christmas.

Once a rooftop car park, these days the only cars parked up top are three old ones filled with plants and trees. The venue is home to three rooftop bars, as well as VR Foosball, London’s only baseball batting cages, and lanes for games like bowling and curling.

Over the summer, you can also work off your stress at Roofop Yoga or silent disco workouts, and there’s plenty of street eats too. 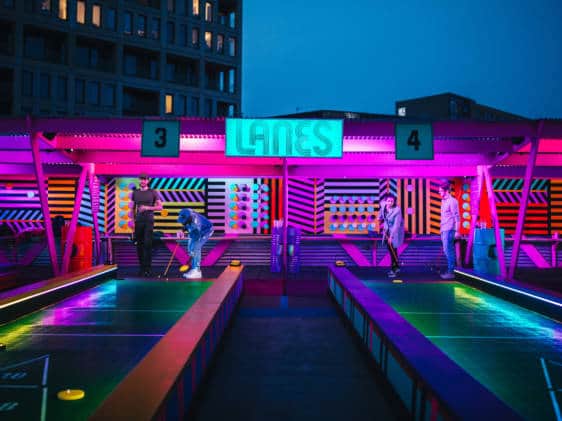 Get lost in the mega-mall aka Westfield Stratford City

This huge shopping mall chain is home to more than 200 shops, and around 70 food places to eat and drink, and plenty of regular offers.

But you can come to Westfield Stratford City without spending a ton. It also hosts events throughout the year including The London Job Show in September, which is free to attend. And if you have some spare clothes, particularly warmer layers, bring them over to the outdoor clothing donation point where recycled gear can be redistributed to homeless people across the UK.

One of the biggest draws is probably the whopping 17 screen cinema, with plenty of room to watch a Marvel Movie while taking advantage of the Vue chain’s low ticket prices (£6.99 at all times, sweet). If you don’t get lost in the vast halls of commerce first, that is.

If you’re looking for something to keep kids entertained, head over to Stratford’s Cultural Quarter. It’s home to The Theatre Royal, Stratford Circus Arts Centre and Stratford Picturehouse. The Discover Children’s Story Centre is the UK’s first Story Centre for children aged 0-11 and their families.

The centre has two-floors of immersive play spaces called Story Worlds, as well as a garden and cafe. Kids can wander around sensory light displays and cave spaces, find hidden shops. Aspiring thespians can also put on their own performances at the puppet castle.

There are also regular events, exhibitions, storytelling workshops and activities to keep your kids (and you) from getting bored.

Have a pie and a pint at The King Eddie

If you want a taste of pre-regeneration Stratford, and respite from the crowds at The Olympic Park or Westfield, then head over to the King Edward VII pub. Known to locals as The King Eddie (even the pub’s web address goes by that moniker), it’s a Victorian public-house that’s been given a 20th century gastropub makeover. Fortunately, it’s not lost its old boozer charm. You can still enjoy the tiled walls, glass panel dividers, dark wooden booths and an open fire.

The menu is fairly stodgy. Expect Brit-grub staples like full English breakfasts, scampi and chips, bangers & mash and assorted pies (including veggie options). Most mains costs between £8.00 and £12.00

The ArcelorMittal Orbit is a three in one attraction. The imposing, red, twisty metal creation is the UK’s tallest sculpture. It was designed by artist Anish Kapoor and structural engineer Cecil Balmond. Standing at 114.5 metres-high, it’s also an observation tower for panoramic city views, where you’ll see landmarks like St Paul’s and The Shard.

But unlike most observation decks, this is one you can descend on a slide (the world’s tallest and longest, no less). You’ll go from the top to the bottom in a head-spinning 40 seconds, but for an extra few quid it’s a pretty fun way to get back down to the ground. You can pick up slightly discounted tickets if you book online. Just decide whether you’re there for the view or to take the slide before you book.

Bounce around at Zap Space

Zap Space is a three-storey trampoline park, inside the former Victorian Rex Theatre where adults (and kids) can bounce around.

Get a literal, and figurative lift with anything from freestyle trampoline bouncing to Zap Fitness, a High Intensity Interval Training (HIIT) trampoline fitness class. There’s even dodgeball if you feel like reliving your teenage inadequacies.

Zap Space also hosts Jump ‘n’ Jam on Friday and Saturday nights. Here you can bounce, chuck yourself down a drop slide, scramble up the ‘ninja nets’ or challenge your mates to a duel on the ‘Battle Beam’ where you attempt to knock your opponent into a spongy pit.

See a show at the Theatre Royal

While the old Rex Theatre has gone, the 19th Century Theatre Royal is still bringing theatre to Stratford. It’s a grand old theatre with a rich red interior. But while its walls hark back to a bygone era, its productions are contemporary and international.

Shows start from around £10.00 and go up to about £35.00. So it’s definitely cheaper to see theatre in east London that over in the West End. There are quite a few free events on at the bar too.

Hang out at Here East

During London 2012, Here East was a broadcast centre and 24-hour media hub. Post Olympics, it’s become a space for creativity, entrepreneurship and education. It’s home to tech start-ups and university labs, but there’s plenty to see and do for the general public too.

Grab canalside food and drinks from independent places like Urban Food Fest, eco-conscious eats from Mother or Italian food from Gotto Trattoria. If you’re in need of some relaxation, you can take a Yoga class or get a massage at Aurora Organic Spa, and if you swing by Buck’s Barber’s, they’ll give you a free beer with your haircut.

There’s usually a decent programme of free events too, ranging from fitness open days to education, tech and disability awareness.

Take a tour of the London Stadium (formerly The Olympic Stadium)

The tours aren’t just for Hammers fans – you’ll get access to areas like the indoor running track, the players’ tunnel, managers’ boxes and even the home side changing room (when they’re empty, obvs).

Stroll along The Greenway

If you want to take a longer walk when you’re in the area, it’s worth visiting the Greenway. It’s a 4.3 walking route and cycle way between Beckton in the east London borough of Newham and Fish Island in Tower Hamlets, incorporating the Olympic Park. It’s worth wandering along for city views over the Docklands as well as historic buildings like the Victorian Abbey Mills Pumping Station and you’ll find some street art along the way too.

Although it’s very much an urban walking trail, keep a look out for birds like mallards, coots and moorhens along the way. The flat, surfaced path makes it a good option in most weather and suitable for people looking for an easy walking path for walkers of all ages.

This article was first published in October 2019 and updated December 2021.