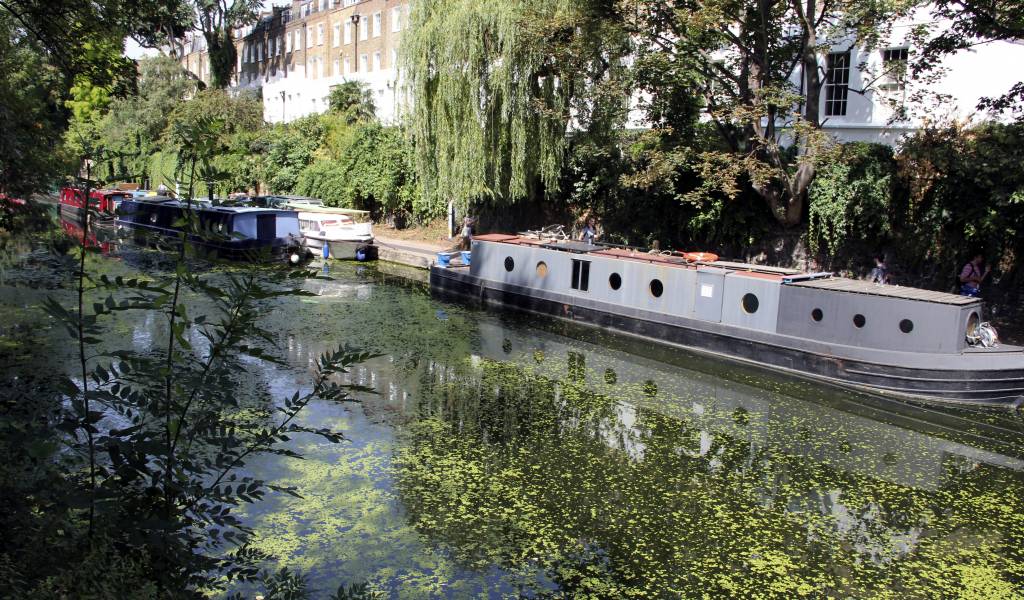 11 Things to Do in Islington

The main drag of Islington (the district, not the borough!) is on Upper Street. This runs between Highbury & Islington Station and Angel. As a rule, the Highbury end is full of independent shops, cafés and restaurants. The Angel side is better known for chain shops and restaurants. From culinary treats to culture and scenic diversions, here is our round up of the top free and cheap things to do in Islington.

Café culture and independent shops are a big part of Islington life. Luckily, Camden Passage in the middle of Upper Street has it all in one picturesque cobbled side street.

For a caffeine fix or baked treats head to Kipferl Viennese Coffee House or Love Brownies. For more savoury eats, check out The Breakfast Club for American-diner style hearty fodder. Sushi Show is great for Japanese food while Brother Marcus rules the Mediterranean food scene. For more local fare, there’s always pub grub and a pint at The Camden Head.

To peruse second-hand, pre-loved and odd items, head down on market days. There are open-air market stalls on Wednesdays, Fridays, Saturdays and Sundays—filled with vintage clothes and assorted items.

If looking through old curios is your thing, then hang out at the covered Pierrepont Arcade. You’ll find for antiques on Wednesdays, Saturdays and Sundays and Books on Thursdays and Fridays. In practically the same spot, Charlton Place Market is also open on Wednesday and Saturdays.

Behind the bustle of Upper Street is Chapel Market, Islington’s largest daily street market. Some stallholders have been trading for years—40 in one case.

Although it’s a part of Islington Farmer’s Market now, it’s not about fancy fodder like posh bread and artisanal cheese. You can still buy cheap fruit and veg, especially when things are in season.
. Always got an eye out for cheap groceries in London? Check out our guide to finding frugal fruit and veg.

Go on a canal-side walk or pub crawl

This stretch of Regent’s Canal between King’s Cross and Hoxton is always fairly busy, and you have to watch out for cyclists at times. But it’s a lovely spot to stroll looking at passing boats, and the old houses that line the nearby streets. The canal path is best accessed via Duncan Street.

It’s a decent base for a local pub crawl too. Islington has some beautiful old pubs overlooking the Canal. On residential streets nearby, you can enjoy a post-walk pint and a roast at The Island Queen or the small, but very charming The Charles Lamb.

For a drink with a waterside view, head to the suitably nautically-themed The Narrow Boat which sits directly on the canal. If you head a little further east towards De Beauvoir Town, you’ll hit The Barge House, a big, bright and airy bar and kitchen. Head towards Shoreditch and you can grab a bite or a drink at The Studio Kitchen.

Catch Comedy previews at The Bill Murray or The Hen & Chickens

Angel Comedy Club is currently hosted between two venues. The first is named after the great man himself—though his unpredictable antics have yet to lead him to drop in for an impromptu set. You can however expect to see well-known comedians, Nick Helm, Jessica Fostekew and Rosie Jones try out new material. Prices start at £5.00–£10.00. The Bill Murray’s sister venue is Upstairs at The Camden Head, which hosts Angel Comedy Raw. It’s a free night featuring a mixed bill of new and established acts.

The Hen & Chickens Theatre Bar is nicer to hang out in just for a drink than the other venues, even if you’re not seeing a performance. It shows fringe theatre, stand up and even TV sitcom and sketch show read throughs. There’s also occasional Edinburgh previews and improv nights.

Winner of the London Theatre Year Award 2018 at The Stage Awards, The Almeida is small, 325 seat theatre. Productions are a mix of classic plays and newer works, and frequently transfer over to the West End

Previous plays include Tennessee Williams’ Summer and Smoke, The Twilight Zone and Ink. Ticket prices start from £10.00 and go up to about £50.00, which is pretty decent compared to the West End. Tickets tend to go pretty fast as it’s such a small theatre.

If you arrive early enough, grab dinner from the theatre menu across the road at Radici, for some of the best value and finest Italian food in Islington.

Although there aren’t many big, green spaces in Islington, it does have a secret garden that’s worth exploring. Culpepper Community Garden is a little known, small but lovingly-kept space, filled with plants and flowers.

It was set up over 30 years ago for local people, and now has over 60 sub-plots for Islington residents who don’t have their own gardens.

Described as a ‘little oasis in the city’, it’s the kind of place that encourages visitors to slow things down a bit. Residents, office workers and passers-by come to
stop and smell the roses, lounge on the lawn with a book or bring a picnic.

The garden is looked after by members and volunteers and includes a lawn, ponds, raised beds for disabled gardeners, ornamental beds, vegetable patches and a wildlife area. It’s open to the public every day and is free to visit (but accepts donations to keep it running). For more tucked away green spaces, check out our guide to hidden London.

Go to atmospheric gigs at The Union Chapel

The Union Chapel is a local gem that’s long been loved as one of the best things to do in Islington—it’s won Time Out’s “Venue of the Year” four times.

And it’s easy to see why. Few venues are as atmospheric and beautiful as this old, Victorian gothic building. The Chapel is still very much a working church, but opens its doors for regular music and comedy gigs. There are daytime tours if you want to take a peek around the pews as daylight streams in through the big, stained glass windows.

Walk along The New River Path (Islington to Manor House)

The New River Path is a long walking route from Hertford to Islington. The full walk is 28 miles long, but the 3 mile-long Heritage section takes you north from the urban, old London houses of Islington to the greenery and waterways around Manor House.

As London walks go, it’s a bit of a hidden gem. The entrance is only marked by a tiny gate on the Duncan Street, which is just around the corner from Highbury and Islington Station. You can follow the green NR path signs, or download the AllTrails app. The walk takes you along the canal, where you can expect to pass pretty gardens, many birds, willow trees, and small bridges. The route continues through Canonbury and Stoke Newington past Clissold Park and the Climbing Castle. Eventually you’ll end up at the redeveloped Woodberry Down area, close to Manor House tube station.

Screen on the Green has been showing films in Islington since 1913. Although it’s now a part of the Everyman chain, the single-screen cinema still has a lot of old movie theatre charm.

The Cinema famously hosted a ‘Midnight Special’ in August 1976, organised by Malcolm McClaren, in which The Clash and The Buzzcocks played with The Sex Pistols. Although it’s less punk in its programming these days, the cinema still has a stage for occasional performances. Midnight movies (or “rather late shows”, as they’re called) are still shown to this day, and tend to be cinema greats and cult classics.

If you can’t find an after-hours screening you fancy, there are plenty of earlier special events. These include classic 35mm screenings and Q&As, as well as the usual box-office offerings.

Screen on the Green

Have a nightcap at one of many cocktail bars

If you like Pina Coladas, but not getting caught in the rain, there are plenty of decent cocktail bars to pick from. Actually, you may raise an eyebrow with a Pina Colada request, but with so many cocktail menus on offer in the N1 postcode, you’re likely to find a tipple you love.

For dimly lit, cosy bars head to the side streets away from the main drag. 69 Colebrooke Row is a classic, tiny, speakeasy-style bar with a pianist to soundtrack your night. There are no showy mixology antics here, the beauty is in simplicity. It’s pretty popular though, so book ahead.

The Four Sisters bar on Canonbury is housed in a former brothel, with high ceilings vintage interiors. It’s known for its six-week barrel-aged Negronis, and cocktails made from in-house infused spirits. Cocktails are two for £12.00 during happy hour, which is 4 pm–7 pm on Mondays to Saturdays.

Over on Islington Park Street, Little Bat Bar is a more recent addition to the neighbourhood cocktail bar scene. It’s a long, narrow bar with dark, classic interiors. They serve up crisp, zingy cocktails (actually, you can get a Pina Colada in this joint) for £8.00– £10.00 as well as bar snacks and sharing platters.

Upper Street is also home to Tiki-bar Laki Kane if tropical rum drinks are your poison. Stay on Upper Street for kitschy, 1930s vibes, check out Hoxley & Porter which also has booths you can book if you’re taking pals.

Live culture might be thriving in Islington, but you can also go and see modern art in a beautiful, Georgian Grade II listed building. Visit The Estorick Collection of Modern Art (most often just called Estorick Collection) to peruse Italian art from the first half of the 20th Century. There are six rooms, permanent collections and temporary exhibitions. It’s the only UK gallery to specialise in Italian art, particularly Futurism.

The café’s garden is a lovely lunch spot for a sunny day, where you can sit among sculptures and recharge away from the bustle of nearby Upper Street. Tickets cost £7 and you can either book online or just turn up on the day

One of Islington’s newest areas for food, drink and leisure – Islington Square is situated in an old postal sorting office building. It has a large terrace which is often home to pop-ups and market stalls, plus restaurants, bars, and an Odeon Luxe cinema.

Each month, the square hosts First Thursdays which is a monthly event designed to bring people together through play, food and drink and music on, you guessed it, the first Thursday of each month. Challenge your mates to a game of ping-pong, grab a slice of Pizza or other Italian savoury treats from Prezzo, and grab a drink from the bar. See more on Islington Square in our article on London’s Best Public Spaces and Squares.