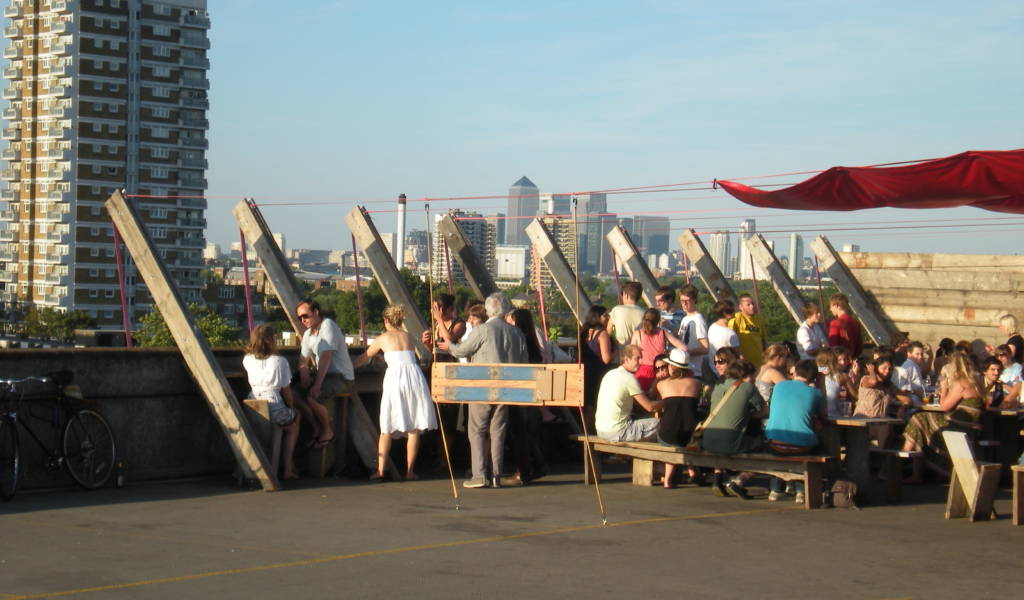 Ten Cheap and Free Things to Do in Peckham

As hipsterfied, hyped-up neighbourhoods go, Peckham in south east London is right up there. But all that hype isn’t over nothing–there are plenty of reasons to hop on the Overground and experience it for yourself. Here are ten free and cheap activities to kick things off.

Peckham is home to a lot of contemporary art. The library on Rye Lane, designed by Alsop and Störmer, won the Stirling Prize for architectural innovation in 2000. Local artists work under the railway arches on Blenheim Grove and the area has a handful of decent galleries too.

It may feature contemporary art, but South London Gallery (SLG) is a long-standing institution in the area. It was originally opened way back in 1891, by philanthropist William Rossiter who wanted to ‘bring art to the people’.

Now, we the people get to come and see the work of British and international artists for free in a beautiful old space. This now includes the more recently-opened Peckham Road Fire Station annexe, and the exotically-named Orozco Garden.

Peckham’s art scene also boasts The Museum of Contemporary Art (MOCA), which puts on sculpture, video, painting, photography and installations. MOCA also operates as a co-operative, where emerging artists can make non-commercial work, which is shown in The Project Space. Looking for something a little more off piste? Be sure to check out our favourite quirky museums and galleries.

Head on up to Peckham Levels and Frank’s

In the summer, crowds head for the rooftop to Frank’s for summer vibes, spritzes and city views. But there’s plenty to see and do on the other levels too, whatever the season. Peckham Levels is a local community space for independent creatives and businesses to work and develop.

These days, the once grey and oily-floored carpark is a colourful, airy space, with neon bright stairwells and plenty of places to hang out. These include a large kids play area, Ghost Notes live space, M.Y.O (Make Your Own) creative studios and Cahoona’s Hair Hub salon

Head on up to level six for natural highs at the Yoga and Wellbeing studio, which puts classes on seven days a week. As well as workshops and treatments, you can get organic food at the café, to stop you ruining your bliss by getting hangry.

The street food market is a newer addition to the 6th floor, serving up a mix of vegan good, Kurdish meze, fried chicken and Chinese dumplings.

Check out the bustle at Bussey Building

Nestled inside the Copeland Park cultural quarter, Bussey Building, like Peckham Levels, is all about community and culture. It’s also got a rooftop bar with pretty sweet views, where you can wave at everyone drinking at Frank’s too.

You can find everything from hip gallery spaces, live venues and taekwondo classes to
an in-house psychotherapy service called The Couch.

In summer, Bussey Building hosts the Rooftop Cinema Club, and down below you can hang out at Rye Wax Vinyl and Zine emporium bar and club for beers and beats, any time of year. 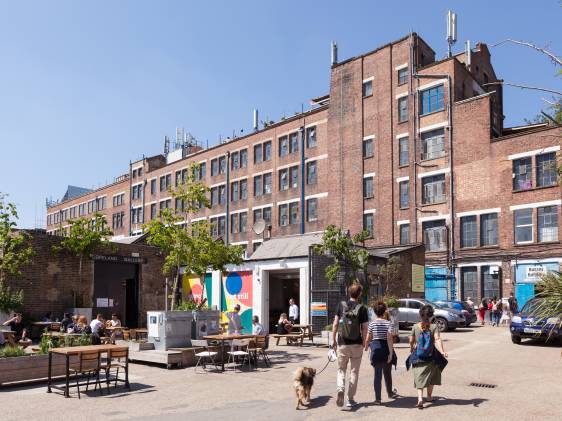 Retro gamers can get an 8-bit fix over on Four Quarters, London’s first arcade bar on Rye Lane. It’s fully nostalgic, even the website has an old video game interface!

All the arcades run on US quarters, so you can buy four for a £1.00 and play games like Asteroids, Ms Pac Man, Sega Rally and After Burner late into the night. The bar also hosts theme parties, gigs and DJ sets.

Persepolis is a tiny (only nine-and half tables), BYO (Bring Your Own] café that serves up Persian veggie food, designed for sharing. Their Snackistan savouries include dairy and gluten-free options. Dishes are around £5.00–£10.00, including meze platters, wraps and hotpots, served with rice and yoghurt.

Be sure to peruse the curious items for sale too, from cookbooks and utensils to backgammon boards. You can pick up some cheap spices and sauces while you’re there too.

Mooch around on Bellenden Road

Bellenden Road has a very different vibe to the hip halls of Copeland Park, and the noisy bars and chicken shops of Rye Lane. The slightly unfortunately-monikered street is quaint and villagey, with independent shops and places to eat.

The street was regenerated in the 90s and adorned with phallic bollards courtesy of artist Anthony Gormley and mosaics by artist Tom Phillips. Stroll along the street and you’ll encounter Review bookshop, (home to the annual Peckham Literary Festival), zero-waste shop Gather and Pizza joint Made of Dough.

Pop round the corner to Choumert road to find another hidden Peckham gem. The Back Room is a tiny community cinema, which is indeed the back room of a pub called The Montpellier. If you’re looking for a cheap cinema closer to home, don’t miss our guide to cheap film culture in London.

Have a locally-brewed beer at Brick Brewery

Brick started out a home brewing hangout for owner Ian and his mates in his shed. But the shed got too full. So he set up a microbrewery and tap room under the arches on Blenheim Grove.

It’s a family affair, and all the beers are named after the local area. Swing by to sample Peckham Rye Red Ale, Peckham IPA, Peckham Pils and Peckham Pale as well as seasonal beers throughout the year.

The brewery also hosts events from beer and food pairings to beer festivals and brewing competitions.

If it wasn’t obvious by now, Peckham loves creativity and community. The DIY Space for London is a co-operative social centre for creative collaboration and events. To attend events, you need to become a member. But at two quid, it’s worth a punt even if you’re only in the area for a short while.

There are always plenty of interesting things to see and do at DIY Space. From coding meetups and underground gigs to workshops, talks, spoken word events and film screenings. The space also has a small practice room if you’re in need of a cheap place to plug in a play with a band. Just book the main space out for a gig and you’re ready to go.

Take a stroll around Peckham Rye Park and Common

If you’re in need of some time out from all the concrete and noise of the Peckham streets, head to Peckham Rye Park for plenty of leafy, green space.

Peckham Rye inspired author Muriel Spark and artist and poet William Blake, who claimed to have seen angelic visions there. In retrospect, there’s a good chance that had more to do with his enjoyment of psychedelics than any park-based spiritual awakening. Either way, there’s a mural that pays tribute to Blake’s trippy imaginings in the north-east corner of Peckham Rye.

If you want something more active than a gentle stroll, head to the Green Gym to hop on free, outdoor gym equipment. Gear includes fitness bikes, pull-up bars, cross trainers and a ski machine. Don’t miss out on exploring the community wildlife garden, lake, water gardens and ornamental garden. Be sure to check our complete guide for more hidden green spaces in London