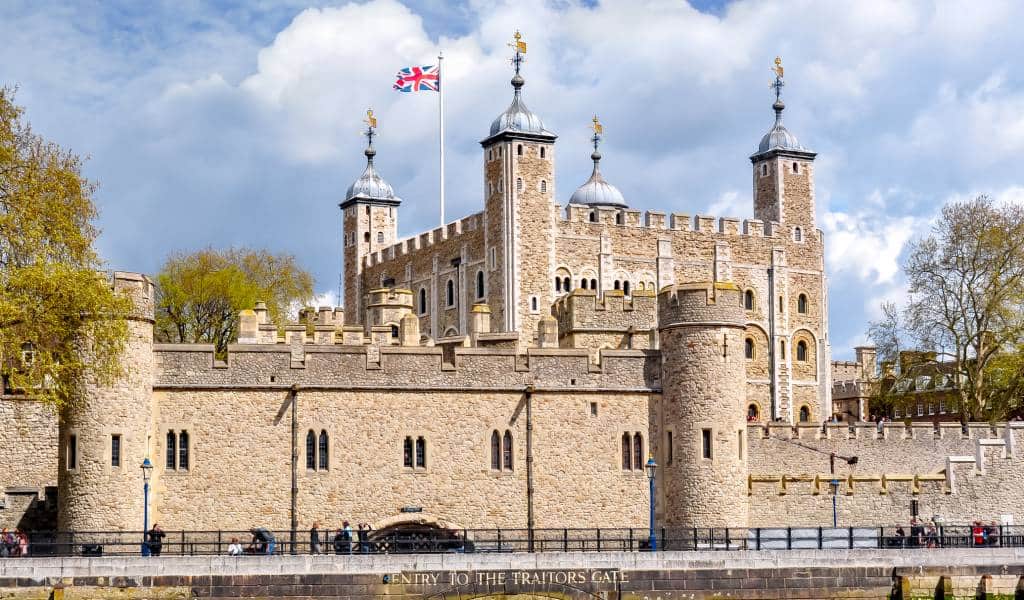 The Tower of London: Ravens, Crowns and Horrible Histories

From palace to prison to protector of riches, the Tower of London is an iconic landmark of the capital with plenty of stories to tell.

Family-friendly but by no means PG, the tower is a sightseeing spot that can drop more names than Alexis from Schitts Creek. To be given its full title, Her Majesty’s Royal Palace and Fortress of the Tower of London is much, much more than just a tower. Best known as the fortress entrusted with the Crown Jewels, it is also the home of ravens, torture devices and an entire armoury, not to mention the ghosts that wander its halls.

Where is the Tower of London?

Located in the East London borough of Tower Hamlets, the tower lies on the north side of the River Thames. The position was chosen due to the existing city walls and riverside defence, which afforded it protection from attacks. Today, it’s a great central location that’s easy to access by public transport and close to other attractions including Tower Hill, St Paul’s Cathedral, Tower Bridge and The Shard.

The tower’s long and bloody history (a potted version)

The history of the tower, which was founded in 1066, is fascinating—and not only when it comes to its resident pets (lions, if you were wondering). The White Tower was built by William the Conqueror in 1078 and was designed to overawe the huge and brutal populace of London. It was originally built using wood but replaced with stone in the 11th century.

Serving as a prison early on, the tower was more luxurious than you might imagine. The first prisoner, Bishop Ranulf Flambard, had servants and wined and dined his captors before becoming the first prisoner to also escape. Extensions and fortifications ensued over the centuries, with numerous sieges taking places and kings residing there both in need protection or as prisoners to be murdered.

The dark history of the tower is somewhat exaggerated, but records of torture do indeed exist, along with murders and executions. The tower was reserved for those who posed a threat to the nation, so it’s a who’s-who of the dangerous and the unfavoured.

Famous names include Guy Fawkes, tortured after being caught trying to blow up the Houses of Parliament; Anne Boleyn, the executed second wife of King Henry VIII; and the Princes in the Tower, the young Edward V and his younger brother Richard, who were confined and assumed murdered so their protectorate and uncle, The Duke of Gloucester, could assume the throne. In more modern times, the prison has held the likes of Rudolf Hess, the deputy leader of the Nazi Party in 1941 and the notorious Kray Twins in 1952.

The menagerie and the Mint

On a somewhat nicer note, the tower was also home to a famous menagerie of animals kept since King John reigned (1166–1216). From lions to leopards to polar bears, the creatures were collected and kept in the ground by successive kings, initially private but opened to the public in the 18th century.

Closed by the Duke of Wellington in 1830 after a biting incident, the animals were moved to the then recently opened London Zoo. Various skulls and cage remnants have been found over the years, confirming the presence of now-extinct species. The prisoner-esque life of these animals is not lost on us, but it’s the best we could do for positive history here.

The Mint was located in the grounds from c. 1279 to 1812, as the numerous mints were unified across the country. While it moved out, you can still see a great exhibition exploring the history and power of coins and the politics that came with it.

What to do at the Tower of London

In addition to exploring the buildings and grounds, there are plenty of living, breathing events and ceremonies taking place at the tower, ensuring it isn’t relegated to the dusty history books of time. Combine the two for a history-filled day that suits families and those looking to learn about the history of London.

Exploring the Tower and meeting the residents

The below events and attractions are included in the standard ticket price unless otherwise stated, but keep in mind that due to current restrictions, some are closed until further notice.

There are a number of extra tours available, some of which are included in the ticket price, all providing a deeper insight into the history of the tower.

There are plenty of group tours of the Tower of London that let you skip the line and learn about the tower history from a knowledgeable guide.

Getting tickets to the Tower of London

Due to Covid restrictions, tickets must be booked in advance as there are a limited number of spots per day. They can be booked online and either presented at the door as a printed PDF or shown on screen using the bar/QR code.

Tickets include entry to see the Crown Jewels, the White Tower, the Battlements, Medieval Palace, Bloody Tower, Torture at the Tower exhibit, Fusiliers Museum and the Royal Mint exhibit. They also include a wide range of experiences and tours as listed above—only a handful require additional tickets.

Top tip: See our article on how to find cheap Tower of London tickets.

Standard entry to the Tower of London:

The above prices are all current ‘peak’ prices, but off-peak are only about £1.00 cheaper at most, so it doesn’t make much difference either way.

If you’re thinking of doing the historical rounds, you can become a member and gain access to five popular spots. These spots include Hampton Court Palace, Tower of London, Banqueting House, Kensington Palace and Hillsborough Castle and Gardens, with bonuses like 10% off the entry to Kew Gardens. Annual membership is £59.00 for adults, £89.00 for a couple, and either £82.00 for a family of one adult and up to six kids or £116.00 for two adults and up to 6 kids. It’s not cheap, but if you’re planning on visiting two or more of these places, it can work out cheaper, especially for families.

Residents of the Tower Hamlets area of London can visit for £1.00 using a Tower Hamlets library card or an Idea store card (along with proof of address). Adults may buy one ticket per day as well as an additional children’s ticket—this can be done at the ticket office.

How to get to the Tower of London

The tower is easy to access, with the helpfully named Tower Hill tube stop just 5 minutes away, served by the Circle and District Lines. It’s also within a 10- to 15-minute walk from London Bridge Station (Jubilee and Northern Lines) as well as Aldgate, Aldgate East, Tower Gateway, Monument, Fenchurch Street and Bank stations on a variety of under and overground lines.

You can also take bus routes 15, 42, 78 and 100 to the Tower of London stop, or catch a boat to the nearby pier. There is no on-site parking but options are available nearby at Tower Hill Car Park, including blue badge spots.

Open with Maps
Written by: Lily Crossley-Baxter
Filed under: Things to Do
Tags:
Sharing