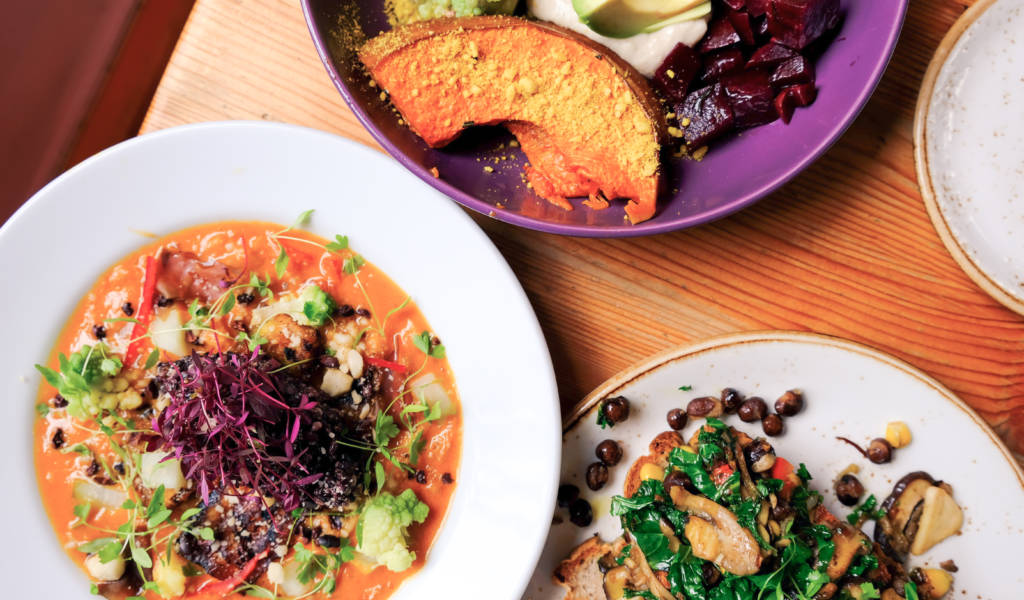 Where to Eat Cheap Veggie and Vegan Food in London

The London food scene has cashed in on the rise in veganism, and people reducing meat and dairy in their diets. We’re pretty spoilt for choice on the food front in this city, but for a long time vegetarians eating in mainstream eateries got fobbed off with mushroom risotto or goat cheese tarts. Vegans got an even more raw deal—unless its raw food they were after.

We’ve rounded up a few places where you can decent, budget-friendly flavoursome veggie and plant-based options in London.

In 2017 Pan-Asian chain Wagamama launched a vegan and veggie menu. It has a combination of vegan alternatives some of the regular menu favourites like vegatsu (seitan instead of chicken in the katsu curry), dishes like spicy kare burosu udon, and mixed mushrooms and panko aubergine hirata buns. Plus vegan-friendly beer.

Leon has vegan options covering breakfast all the way to dinner with some tasty dairy-free snacks and hot drinks to boot. For something hearty and filling, their boxes are pretty good value and include meatless meatballs with rice, Brazilian black bean and rice, and Lebanese lentil salad with harissa-roasted carrot and butternut squash and falafel.

Where: All over London
Prices: £7.00 for a large box
Web: Official site

One of London’s oldest vegetarian restaurants, Govinda’s is a Hare Krishna-run that’s been feeding people cheap, nutritious food since 1979. There are two main menus, À La Carte or Thali. Thalis are better for vegans, who can get 5 items for £6.95 including veg curry, lentil soup, rice and green salad. Veggies who aren’t dairy free can take advantage of the tasty paneer dishes on offer.

More veggie than vegan, it’s a basic but tasty option for veggie curry that’s been a staple of Angel’s Chapel Market since the mid-80s. The decor hasn’t really changed much since then either, the walls are plastered in pro-veggie/anti-meat propaganda which varies from entertaining to just plain odd, though it’s fun to look at the gallery of famous vegetarians as you pay. It’s a self-service, BYO drinks kind of place—just grab a plate and fill it with veggie curries, colourful salads, bhajis and paratha!

One of Soho’s most popular veggie spots, Mildreds opened in the 80s to pull London vegetarians out of its brown food rut. There’s no booking at the orginal Lexington Street venue so be prepared to queue at peak times, but there are also branches in Camden King’s Cross and Dalston too which do let you book for large groups (10+). Mildreds caters well for vegans too, and even runs vegan cookery classes. Menus are seasonal and including spicy sweet potato and cashew nut curry, mushroom and ale pie, and Mexican bean burgers.

A small Eithiopian vegan cafe in Dalston serving 6 dishes with either injera (a large flat bread over a communal pan) or rich. Main dishes include platters of yemisir wot, a slow-cooked lentil dish with traditional spices and fesolia, a spiced, mixed vegetable stew.

Probably one to visit with friends, rather than solo as it’s a lot of food, but they also have sampler portions as takeaway for a fiver.

A south London commmunity vegan café that provides on-the-job training for people with learning difficulties and mental health–facing challenges in getting employment. The changing menu includes small plates as well as mains like butternut squash curry, vegan mac and cheese and a burger of the day.

A local favourite, Karamel is a cafés/restaurant/bar and arts venue inside the Chocolate Factory in Wood Green. You pitch up for some tasty food and entertainment, from poetry and comedy to live jazz. Sundays are all about the vegan Sunday roast with options including almond Wellington or vegan sausage Wellington and plenty of trimmings. They also have burgers and pizza as well as sides like samosas and mini meze.

Further reading:
Budget Breakfasts in London for Meat-Eaters, Vegetarians and Vegans Too
Frugal Fruit and Veg in London